Nissan's NV300 is a mid-sized van that offers a very complete all-round package. Jonathan Crouch checks out the revised version.

Nissan's medium-sized van is the NV300, the Japanese brand's version of a design also shared with Fiat and Renault. It's very competitive in terms of efficiency and carriage capacity and differentiates itself from its rivals by offering a unique-in-segment five year / 100,000 mile warranty. Now, buyers get more sophisticated 2.0-litre diesel engines and a smarter, better-connected cabin.

If your business is searching for a medium-sized light van, then you're certainly not short of choice. Ford's Transit Custom, Volkswagen's Transporter and Mercedes' Vito may all be options that spring to mind, though in truth, these stand-alone models account for a relatively small slice of the European market for mid-range LCVs of this kind. No, the biggest sales in this segment are spread across just two main designs shared by a variety of manufacturers. First there's the model badged variously as either a Citroen Dispatch, a Peugeot Expert, a Toyota Proace or a Vauxhall Vivaro. And up against it is the design that takes nearly 30% of the European market in this segment, the vehicle we're looking at here, badged as either a Fiat Talento, a Renault Trafic or, as in this case, a Nissan NV300. The Nissan is less familiar than its two design stablemates on British roads, despite the fact that it's priced sharply and offers a longer warranty. How much else has it to offer today's demanding operators? Let's find out.

New 2.0-litre, turbocharged dCi engines and the availability of a six-speed DCT (Dual Clutch) automatic transmission ensure this NV300 LCV is better suited to the needs of business customers. All engines comply with Euro 6d-TEMP standards and, with a variable geometry turbocharger, achieve greater power outputs spanning 120hp, 145hp and 170hp and increased torque of up to 380Nm. All engines are matched to a six-speed manual gearbox as standard, while the 145 and 170hp versions can also be specified with a freshly introduced six-speed DCT automatic, which optimises economy and allows smoother, faster gear shifting. A 1.6-litre dCi unit with 95hp is offered at the base of the range. Nissan reckons that this NV300 will feel pretty much like a large MPV to drive and the driving position's as commanding as you would expect. Big door mirrors with convex surfacing on their lower and outer edges are present and correct to help with manoeuvring that can be aided by the neat wide angle mirror fitted to the back of the passenger sunvisor. Further embellishments intended to help you avoid urban scrapes include options like parking sensors and two kinds of rear view camera. This NV300 should prove to be a tough workhorse whatever its working conditions. Maybe that'll involve towing. If so, this vehicle's able, when equipped with a towing hitch, to pull a 750kg unbraked trailer and up to 2,000kg for a braked unit. 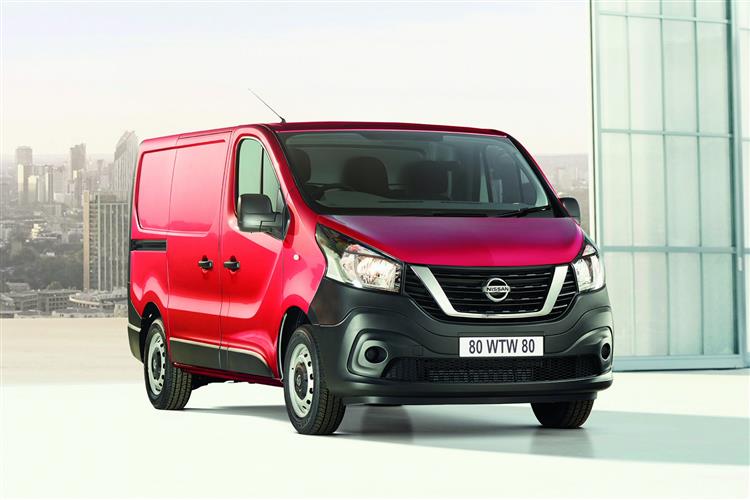