Mercedes has revived a classic 1970s name in creating this SLC, which replaces the third generation SLK as the company's compact roadster. There's a slightly smarter look, both inside and out, while the top AMG variant gets a more sensible twin-turbo V6. The key changes for most buyers though, lie in upgraded automatic transmission and a 'DYNAMIC SELECT' driving modes system that helps make this machine more rewarding to drive than you might expect. Let's check this car out in potent 2.0-litre turbo SLC 300 guise.

Think about a compact, fashionable open-topped sportscar with a clever metal-folding roof and you tend to think of the model that, back in 1996, basically invented that concept, the Mercedes SLK. It was a car gradually improved, polished and refined over two decades and three generations that have brought us to the version we're going to try here. There's a new name to get used to - Mercedes now calls this car the 'SLC' - but the fundamentals of what's on offer are basically the same. What's changed though, is the packaging and technology that make this car what it is - crucial upgrades for such a style-conscious market. The 'C'-designation apparently references the close engineering links this roadster has always shared with Mercedes C-Class models. Which means that this SLC gets all the latest technology found in that product range, things like the 9G-TRONIC 9-speed auto transmission, the most sophisticated set-up in the segment. And a 'DYNAMIC SELECT' driving modes system able to modify engine, transmission, steering and suspension settings to suit the driver's need. The derivative on test here, the 245bhp petrol-powered SLC 300, gets both of these refinements.

The SLC is very much an evolution of the SLK it replaces, which is a good thing in our book. What you get is a sleek two-seat roadster that corners with ease and plenty of poise. It also steers accurately and precisely, with none of the shimmy or flex that some convertible cars suffer when dealing with bends or broken roads. Go for the this SLC 300 model's 'AMG Line' trim and you get firmer 'Sports' suspension that lowers the car by 10mm but delivers no detriment to comfort or agility. Key improvements made as part of the evolution into this SLC model include the addition of a sophisticated 9-speed 9G-TRONIC automatic gearbox that almost all customers will want. Plus there's a 'DYNAMIC SELECT' driving modes system that allows you to alter steering feel, throttle response, gearshift timings and stability control thresholds to suit the way you want to drive. Under the bonnet, the key change is the installation of a twin-turbo 3.0-litre V6 in the top full-AMG model to replace the previous throbbing V8. Otherwise, the mainstream engines are carried over from the previous SLK line-up, with the SLC 300 variant we're trying here sharing the same 2.0-litre petrol turbo engine as used in the base SLC 200. Here though, it develops 245bhp, good enough to take this derivative to 62mph in just 5.8s en route to 155mph. That's pretty close to the kind of pace you'd get in that top Mercedes-AMG SLC43 variant. 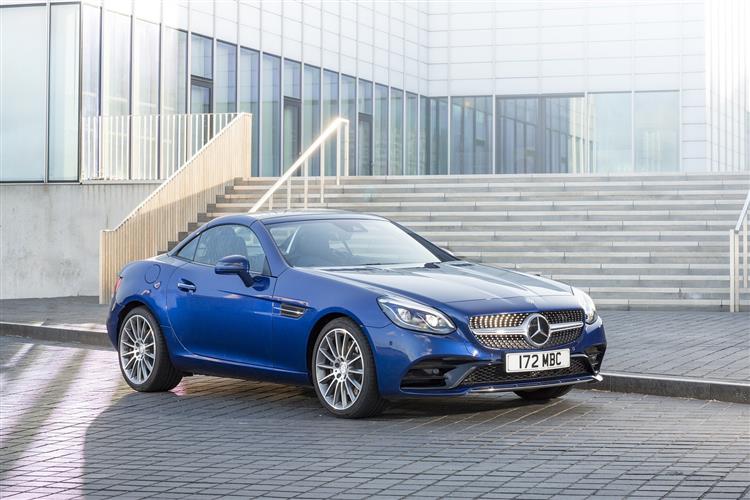