AIR ON A B STRING (some text hidden)

Every brand must, it seems, embrace turbocharging these days. Even Porsche, who used to be masters of the normally aspirated art. So it is that the brand's Boxster roadster has shed its old flat six powerplant and instead embraced a flat four unit for the first time since the old 914. How will it fare in the pokey 718 Boxster S?

Over the years, and despite its obvious talent, the Boxster has struggled to shake free from its 'poor man's Porsche' image. Slowly but surely though, that's happening as Porsche has increased the number of common parts its shares with its classic 911 stablemate. Can it take another step in the right direction with this turbocharged 718 Boxster S model? Though the cylinder count is down over the previous flat six model, power is up and with this 'S' variant, you get 350bhp, 50bhp up on the standard version. In case you were wondering, the '718' reference in the name refers not to the engine but a series of classic Porsche mid-engined models that won numerous races in the 1950s and '60s. Enough with the briefing; what's this car like?

So to that engine, a 2.5-litre four cylinder turbo. Power is up by 35bhp over the previous six cylinder normally aspirated model - which is a good start. That's enough to see 62mph flash by in 4.4s en route to 177mph, which ought to be fast enough to make you question whether you really want that 911 after all. A six-speed manual is fitted as standard, although the optional seven-speed PDK double clutch gearbox is sure to be popular. This gets revised software for quicker and smoother shifts. With the optional PDK gearbox, this improved 718 Boxster S will hit 62mph in a claimed 4.2s (half a second quicker than the standard version). Handling-wise, the re-tuned chassis enhances cornering performance and the electro-mechanical power steering system is configured to be 10% more direct. 'Porsche Active Suspension Management' is an option and 'S' buyers can specify an even more focused 'Sport Chassis'. Plus there's the usual 'Sport Chrono Package' option with its various selectable driving mode settings that now include a 'Sport Response' button for brief extra engine responsiveness when you need it. 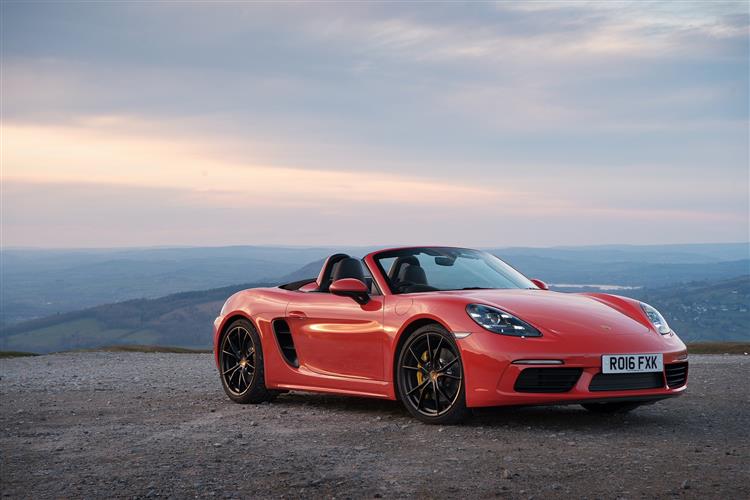