"A bright light blue small Volvo SUV with white wheels and a white roof designed to replicate the look of a science fiction transformer robot. Really?"

In Sweden, they design SUVs just a little differently. Take this one, Volvo's XC40, a contender that's much more than just a smaller version of the brand's larger models. It gets its own 'CMA' platform and some very distinct design to set itself apart. The result is an interesting alternative to more mainstream premium-branded compact SUVs like BMW's X1 and the Mercedes GLA. And one you might rather like. I've been trying one as part of a long term test. If not long ago, you'd have told me that my daily drive would be a bright light blue small Volvo SUV with white wheels and a white roof designed to replicate the look of a science fiction transformer robot, I'd have laughed. But that's just what the brand provided for me as part of this extended test. British designer Ian Kettle wanted this car to be different, which is why the XC40 looks as it does, a concept inspired by the small robots he used to watch in science fiction films. The small SUV sector's usual curvy conformity is replaced by chunky cuteness with a 'transformer-like' vibe. Not everyone will like it - but then if everyone did, it wouldn't be such an interesting piece of design. Inside, a dose of crushing conventionality here would have been a disappointment after the extrovert exterior: fortunately, that's not what's been served up. Instead, you get digital dials, a dose of Swedish minimalism and door cards made of a weird felt apparently fashioned from recycled drinks bottles. There are door bins bigger than any you'll have ever seen. And the designers have somehow crammed in the 9-inch portrait-style Sensus infotainment screen that's used in larger Volvo models, framing it with a set of unusual 'Star Wars'-style vertical vents. Interested yet?

In the back, headroom's generous and the relatively lengthy wheelbase helps with legroom too. My wife and I aren't so keen on the way that the angled style of the rear C-pillar might create something of a claustrophobic feel in the back for younger folk; if you've children, take them along on the test drive to make sure they'll be happy here. The rear seat base unfortunately doesn't slide or recline but the rear headrests are well placed and comfortable - and they also fold down at the touch of a button on the centre-dash touchscreen up-front. As is unfortunately quite common on cars in this class, you'll struggle to accommodate three adults over longer distances because of the very prominent centre transmission tunnel. Arguably the most impressive area of the car is its big 460-litre boot. And not just because it's large. Whatever your point of comparison, you'll struggle to find a rival that will allow you to use the boot area so practically. That's if you specify the optional 'Convenience Pack' we had fitted which gives you a 12v socket along with a load protection net and which can divide the space laterally to stop your shopping from sliding around. The hinges of the provided floor divider even stand proud of its top edge, giving you hooks from which you can hang shopping bags. Neat. Are there issues? If you can afford the premium asking prices well no, not too many. To be frank, this car isn't especially interesting to drive, but that'd be more of an issue if its rivals were substantially more engaging - and for the most part, they simply aren't. Anyway, customer priorities in this sector are more focused on getting a slightly higher level of comfort and refinement than would be offered by a volume brand 'Qashqai-class' model - the sort of thing this Volvo easily delivers. In summary, Volvo clearly felt that to break into the premium brand compact SUV segment, it had to offer something distinctively different to its German rivals, so that's exactly what we've got. Not everyone will like the looks but there's no doubt that they'll help the company to target buyers who would never previously have considered a Volvo. I'm one of those. And looking forward to the next few thousand miles. 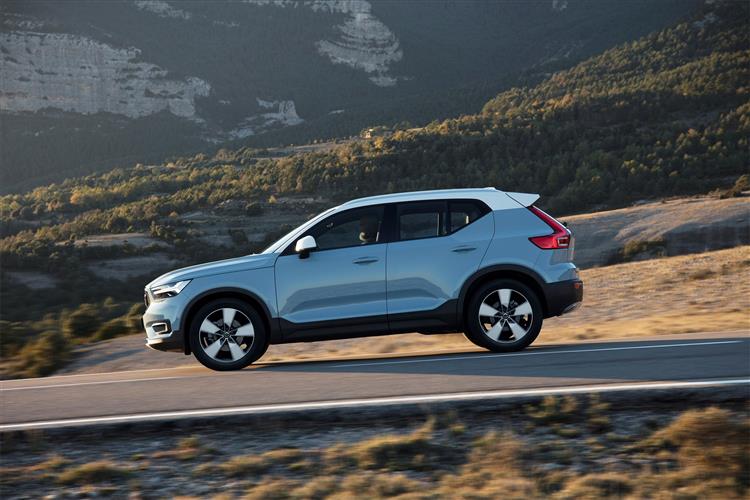