WHERE IT'S AT? (some text hidden)

The Ateca was SEAT's very first Crossover. This updated version continues to look a strong proposition. Jonathan Crouch checks out what's on offer.

SEAT's Ateca feels rejuvenated as a result of a significant package of updates. There are fresher looks, a more modern cabin, more frugal engines and stronger standards of safety. Plus this compact mid-sized SUV remains dynamically adept in a way few rivals can match.

Not many brands enter an entirely new market segment and get it right first time, but that's exactly what Spanish maker SEAT managed with its first compact SUV, the Ateca. Launched in 2016, it's since become one of the Iberian manufacturer's biggest selling models, over 300,000 having been sold prior to the launch of this facelifted version. Nothing too extreme's been done here. Nothing much needed to be. The Ateca was already the best car in its segment to drive and also one of the most affordable and one of the more efficient. But its looks were becoming over-familiar, so SEAT's tweaked those, at the same time as adding the latest screen tech to the cabin, plus there's been some mild tinkering in the engine range.

Prior to the original launch of this Ateca, we'd come to accept that compact Crossover models of this kind were never going to be very good to drive. If that's still your perspective, then a pleasant surprise is in store once you hit a few twisty roads in this little SUV. Drive at seven or eight tenths and there's pretty much no difference between the dynamic responses you get from this SEAT and those of the Leon hatchback it's based upon. Only when you push right to the limit does this Ateca's taller stance and slight extra weight begin to tell - and even then, the car's pretty responsive, with well-controlled body roll and enthusiastic levels of grip and traction. That much has remained the same with this revised version, but there are a few changes on the engine front. The turbocharged 1.0-litre three cylinder TSI petrol unit that most customers choose is now standardised with 110PS and gets a range of updates to improve its efficiency. It's only available linked to manual transmission. If you want the option of an auto with a petrol-powered Ateca, you'll probably want the 1.5 TSI unit, which puts out 150PS and is also now slightly more efficient, as before integrating Active Cylinder Management technology. The most powerful petrol option is a 190PS 2.0-litre TSI unit which can only be had linked to DSG dual-clutch auto transmission and an extra-cost 4Drive all-wheel-drive system. The 2.0 TSI unit is also available in the top CUPRA Ateca with a 300PS power output. As for diesel, well the previous 1.6 TDI unit is no more, replaced by a 115PS 2.0-litre TDI powerplant offered only in manual form. There's also a 2.0-litre TDI 150PS diesel unit, which can be had with the option of DSG dual-clutch auto transmission and 4Drive AWD. 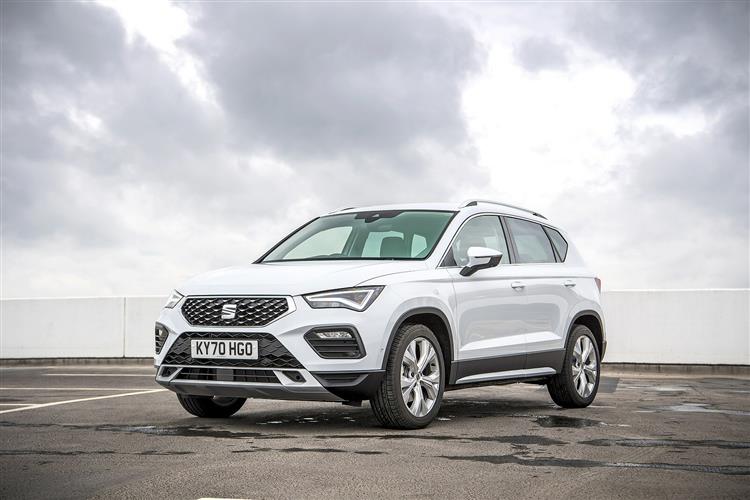