Toyota's RAV4 mid-sized SUV soft roader has been around so long it's easy to forget quite how far it's come. The fifth generation model is bigger, better finished, and far more efficient, thanks to an exclusive reliance on hybrid power, now offered in plug-in form as well as in self-charging guise. And Toyota hasn't forgotten that cars in this class need to look good and drive well too. Reacquaint yourself with it. You might be in for a surprise.

It's easy to underestimate quite what a debt of gratitude we owe the Toyota RAV4. Back in 1994, the market for compact SUVs was massively different to the one we have today. If you wanted a modestly-sized car of this kind back then, you had to do so with the proviso that it was likely to fall over if it was shown a picture of a corner. This was all part of the bargain. You saved money on the upfront cost, but shelled out when it disappeared through a hedgerow on its door handles. The RAV4 changed all that. It was the first compact SUV that was actually good fun to drive on road. But times change. The RAV4 has grown ever bigger and more sophisticated in response to market entrants like the Volkswagen Tiguan, the Honda CR-V and the Ford Kuga. This fifth generation car is a smarter take on a well-established theme. More spacious and more efficient courtesy of hybrid power, it aims to bring the RAV4 back to a prominent position amongst volume brand entrants in the mid-sized SUV marketplace.

Having dipped its toe into the hybrid waters with the previous generation version of this model, Toyota has gone all-out with petrol/electric power in this MK5 version. It's all you can have - though buyers are offered the option of either front wheel drive or All-Wheel Drive. This model's body is stiffer than that the previous one, while its centre of gravity is also lower down: it's all aimed at making this model a more engaging steer, as is the engineering of this fifth generation RAV4's much more sophisticated TNGA GA-K platform. The suspension set-up's more predictable, using MacPherson struts up front, while a double wishbone arrangement at the rear. The mainstream self charging hybrid engine isn't too much different from the hybrid unit that RAV4 buyers were served up before. It's 2.5-litres in size and generates a combined power output of 215bhp. The All-Wheel Drive variants gain a second electric motor driving the rear axle, which lifts that output slightly to 219bhp. As before, this set-up has to be mated to CVT belt-driven automatic transmission. This demands a relaxed driving style if revs are not to flare every time you exercise your right foot. If you do that, rest to 62mph occupies 8.4s en route to a maximum of 112mph. Toyota also now offers a Plug-in hybrid variant, which boosts engine output to 302bhp, sprints to 62mph in 6.2s and offeers a 37 mile EV driving range. 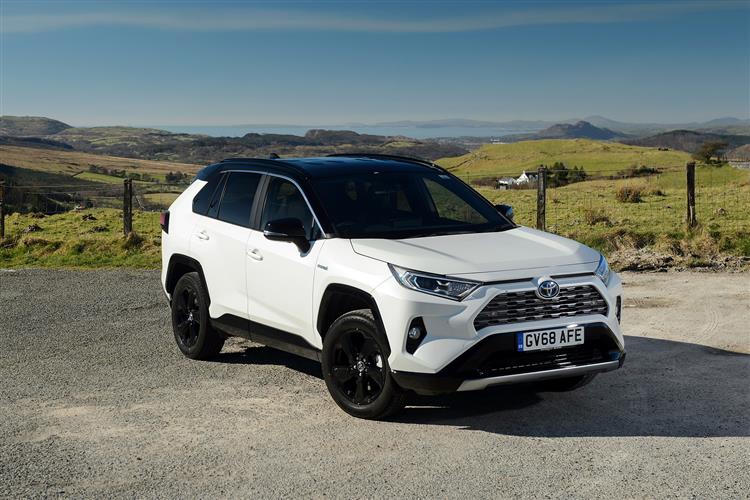