Porsche's redoubtable 718 Boxster roadster is as good as ever. Jonathan Crouch drives it.

The Porsche Boxster has long been the benchmark in the sports roadster sector - and still is in this latest turbocharged '718 Boxster' guise. It's more powerful, more efficient, sharper to drive and better looking. What's not to like?

How do you begin to design an even better Porsche Boxster? Think about the restrictions placed upon you, were you to be tasked with the job. It would need to be better to drive than any of its key rivals, yet it would also need to wriggle into a price bracket that slotted it between sports roadsters and the latest Porsche 911 models. It would need to appeal to the German intent on thrashing it around the Nurburgring, the Floridian retiree with a golf bag in the boot and those inching through the Beijing rush hour. As with any successor model, it would need to pull off the trick of being better built but lighter, quicker yet more economical and offering more equipment while issuing fewer tailpipe emissions. That's one heck of a balancing trick. Thing is, Porsche looks as if it has pulled it off with this 718 Boxster model. The '718' reference in the name refers not to the engine but a series of classic Porsche mid-engined models that won numerous races in the 1950s and '60s.

The Porsche Boxster's reputation as a driver's car has been burnished with each successive generation and this improved third generation variant appears to offer a useful step forward in this '718' form. Much has changed on the engine front. The entry level unit has been downsized to a 2.0-litre unit, but thanks to the addition of turbocharging, the good news is that it generates 35PS more than the old 2.7-litre lump, managing a hearty 300PS, which is much more than the original Boxster S. This same 300PS engine is also offered in the more driver-focused Boxster T variant. The '718 Boxster S' offers a 2.5-litre capacity (down from 3.4) but the powerplant is good for 350PS (up from 315PS). The Boxster GTS 4.0 has a 400PS version of the brand's 4.0-litre six cylinder powerplant. And the top 718 Spyder uses the same 4.0-litre V6 with 420PS. Across the range, a six-speed manual is fitted as standard, although the optional seven-speed PDK double clutch gearbox is sure to be popular. This gets revised software for quicker and smoother shifts. With the optional PDK gearbox, the '718 Boxster' will hit 62mph in a claimed 4.7s, with the '718 Boxster S' managing to knock over the benchmark sprint in just 4.2s. Handling-wise, the re-tuned chassis enhances cornering performance and the electro-mechanical power steering system is configured to be 10% more direct. 'Porsche Active Suspension Management' is an option and 'S' buyers can specify an even more focused 'Sport Chassis'. Plus there's the usual 'Sport Chrono Package' option with its various selectable driving mode settings that now include a 'Sport Response' button for brief extra engine responsiveness when you need it. 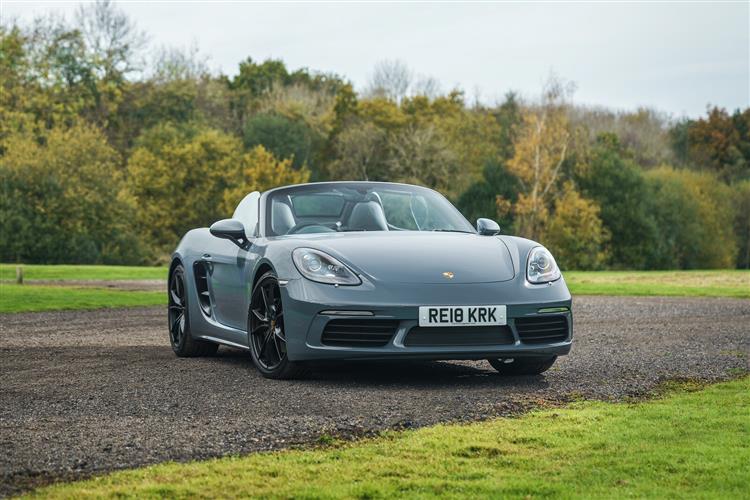