The second generation version of Toyota's Mirai is a model the brand wants you to choose on its own merits, not just because it's a hydrogen fuel cell car. Its predecessor was first to market with this technology and this replacement design aims to play a key role in popularising it amongst forward-thinking ordinary buyers. Ultimately, this contender needs a far more developed hydrogen station infrastructure for popular acceptance. But it's a fascinating glimpse into all our motoring futures.

Are you ready for a hydrogen fuel cell car yet? Probably not. But Toyota wants you to be. Any really switched-on industry analyst will tell you that electrification is a short-term fix to the environmental impact of the motor vehicle and that hydrogen fuel cell tech is a far more sustainable route to long term global mobility. As you'd expect it might be given that a hydrogen fuel cell car needs no smoky power stations to provide its energy, emits nothing more deadly than pure water and can be recharged in a matter of minutes. Unfortunately, many manufacturers and governments have yet to grasp this concept - but Toyota does. The Japanese maker was first to market with a volume-produced hydrogen-powered car, launching the first generation version of its Mirai model back in 2014, since when around 10,000 examples have been sold worldwide, mostly to research institutes, government organisation and companies involved in the growing hydrogen economy. This second generation design is tasked with attracting real customers to the fold and wants to be a car you'd choose to own on its own merits, not just because of its futuristic powertrain. Lofty ambitions then.

With the first generation Mirai, Toyota was so focused on making the fuel cell technology actually work that thoughts of drive dynamics were somewhat secondary. This MK2 model is different. Chief Engineer Yoshikazu Tanaka wants the Mirai now to have 'the kind of dynamic and responsive performance that can bring a smile to the driver's face'. The starting point in achieving that goal was the installation of a much stiffer and more sophisticated TNGA platform shared with the Japanese market Toyota Crown executive saloon. And a switch away from the front-driven format of the MK1 model to a rear-driven drivetrain. More power was also needed, the previous car's 152bhp and 335Nm outputs now deemed insufficient for the Mirai's more up-market aspirations. And of course, Toyota knew that future buyers would want this car to go further between hydrogen cell refills - hence a 30% range increase: this car will now go 440 miles between top-ups. The chassis changes won't be enough to create really rewarding handling - the car's really too heavy for that. The updates instead have been targeted at creating the kind of elegant, luxury feel that's been benchmarked by Tanaka-san and his team against conventional luxury models from BMW and Mercedes. The engineers worked on creating light and easy handling on winding roads and a linear, smooth response when pulling away. 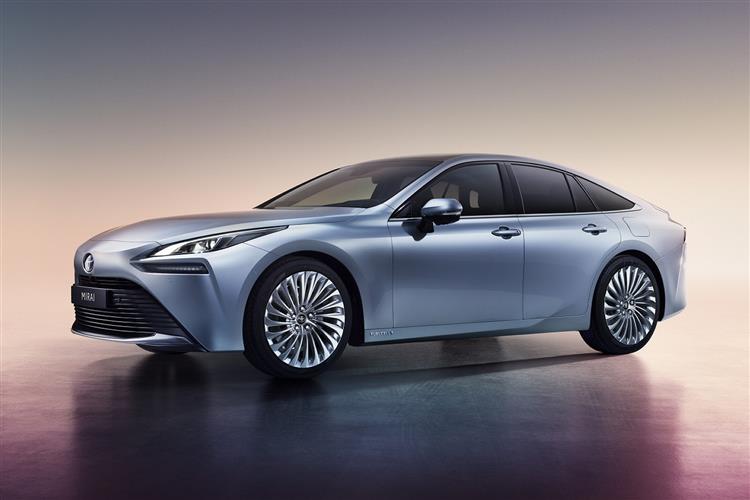