If you think the big three prestigious German brands have the Executive car segment sewn-up, a drive in the improved version of Jaguar's second generation XF may be enough to make you reconsider. Even in the face of tough competition from rivals like the BMW 5 Series, the Mercedes E-Class and the Audi A6, this car offers a compelling range of virtues.

This MK2 Jaguar XF, launched back in 2015, proved to be lighter, more efficient and packed with technology, an improvement on its predecessor in every possible respect, aided by its hi-tech aluminium-intensive architecture. But time moves on. Since then, we've seen all-new versions of all this car's key market rivals, yet the XF soldiers on as a bit of a left-field choice in the full-sized executive segment. Now updated, it aims to offer a more sporting, dynamic choice in the full-sized Executive segment. To put that in competitive context, it's more BMW 5 Series than Audi A6 or Mercedes E-Class, though buyers of all three of these cars should be tempted by this model's luxurious cabin technology and very decent efficiency figures. In the last decade, German rivals like these have dominated this market sector as Jaguar re-built its reputation amongst business buyers. Having done that and rejuvenated the car that re-established it as a desirable brand, the company's ready to take on this segment in earnest with what looks to be an elegant, progressive display of British engineering and craftsmanship. How will it fare? Let's find out.

Stay with us here. The XF range hinges around a 2.0-litre diesel four-cylinder engine and while that doesn't sound too exciting, it's where the big sales are. It now comes in a single 204PS D200 state of tune, offers customers the option of rear wheel drive or AWD and features the brand's latest MHEV mild hybrid engine tech, which can assist the engine under acceleration. As a result, a rear-driven model gets to 60mph in 7.1s - or 7.5s in AWD form. The conventional petrol options continue much as before, 250 or 300PS versions of Jaguar's usual 2.0-litre Ingenium unit in the P250 (RWD) and P300 (AWD) variants. Both feature the engine technologies including a twin scroll turbocharger and Continuous Variable Valve Lift (CVVL), for a strong combination of refined performance and efficiency. The P250 makes 60mph in 6.5s, which the P300 AWD variant mamnages the same sprint in 5.8s. All engines are paired with Jaguar's eight-speed automatic gearbox, which can be controlled using the steering wheel shift paddles for added driver engagement. Across the XF range, driving dynamics suit a relaxed but purposeful style. The chassis delivers near perfect 50:50 weight distribution and huge strides have been made to perfect refinement. Ride is another class-leading XF quality. This Jaguar shares its suspension set-up with the smaller XE model, which means struts with double wishbones at the front and an 'integral link' independent set-up at the rear. The steering uses the same electric power-assisted set-up as the Jaguar F-Type and XE, while active dampers are on the options list. 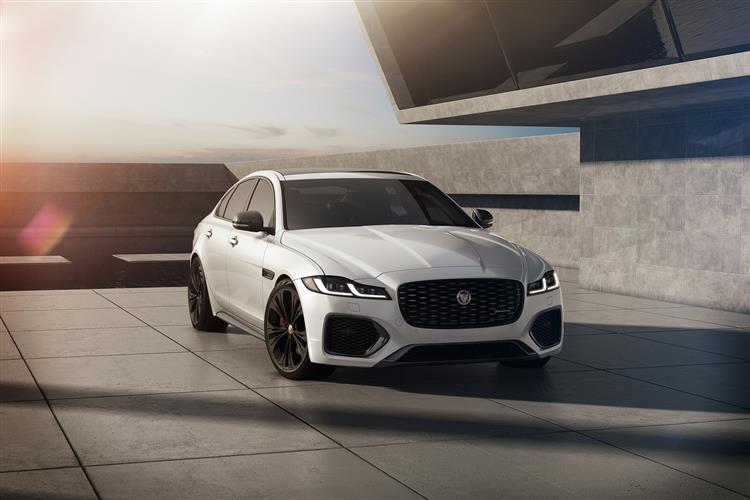