BMW is reaching into the mainstream with this 2 Series Active Tourer, a reasonably spacious and quite affordable family five-seater. MINI underpinnings saw this unveiled as the brand's first front driven model and in this revised form, it's certainly a classier, more interesting alternative to a conventional Scenic-style compact MPV. Most will want the volume 218d diesel version. That's what's on test here.

Front wheel drive and BMW. It's not often you see those words in the same sentence. Equally unusual is the idea of any kind of BMW MPV. We're here though, to look at a car that brings all of these things together, the Munich maker's 2 Series Active Tourer. This model's closest market rival, the Mercedes B-Class, is the nearest thing we've had to something of that kind in this segment, but that car isn't especially dynamic, either in the way it looks or the way it drives. To be frank, it's aimed at a more mature audience. What the market needed was the same sort of thing but with sharper looks and handling. Maybe even a bit of cleverer packaging too. That's what BMW has tried to deliver here. And tried to achieve for the first time without its traditional unique selling point when it comes to driving dynamics: rear wheel drive. The Bavarians once said they'd never abandon that, but the space-efficient front-driven platform and engine package developed for the third generation new MINI proved too tempting a package not to install in something bearing the BMW badge. So, does it work in this smartly-styled Active Tourer model? Does it feel like a real BMW? And would you want one if it did? That's what we're here to find out.

The variant we tried, the 218d diesel, will probably account for the majority of sales of this car. Under the bonnet here, there's a conventional four cylinder powerplant offering 150bhp and pokey performance, with 62mph just 9.0s away en route to 130mph. This isn't the most refined small diesel I've ever driven either at lower speeds or at tickover, but at a cruise it settles down into a very acceptable cruising thrum. To be honest, I can't really see why you might want to go much faster in this car, but should that be your desire, then BMW will wheel out a 190bhp 220d variant. Here, there's the option of BMW's xDrive 4WD system, a set-up that really comes into its own in the winter months, distributing as it can almost 100 per cent of power to either axle - or a mix between both front and rear. Either way, the car will be kept firmly planted through the tightest bends in the foulest weather. The extra xDrive traction aids performance too, the 0-62mph sprint time improving from the 7.6s showing you get in the 2WD 220d model to 7.5s. An 8-speed automatic gearbox is optional. 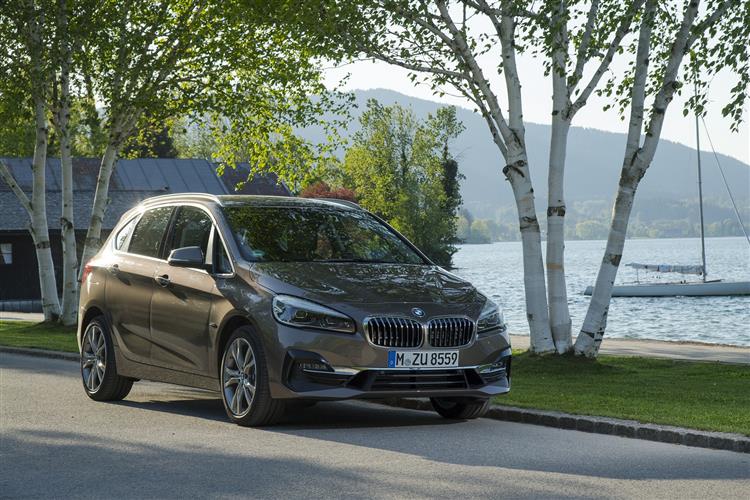