HOT INSIDE (some text hidden)

Mercedes and AMG bring us the sports car we knew they were capable of. Jonathan Crouch reports on the revised Mercedes-AMG GT.

The Mercedes-AMG GT continues to shake up the high performance sportscar market with a combination of extreme power, sleek styling and all the combined know-how of the Affalterbach and Sindelfingen works. Recent improvements have made the Coupe and Roadster variants look a little classier and there's now quite a choice in terms of engine output.

The first Mercedes was a racing car. Ever since, the brand has had competition in its bloodline, drawn upon throughout a rich history of motorsport-orientated coupes and roadsters. Cars like this one, the Mercedes-AMG GT. Mercedes-AMG is a brand that enthusiasts may now be used to, its primary focus being the creation of high performance versions of usually mundane Mercedes models. Every so often though, this Affalterbach division gets let off the leash to do its own thing and on the first occasion that happened, we got something very special - the SLS of 2009. As with the SLS, this GT model still uses a V8 beneath the bonnet, but its 4.0-litre engine is smaller and quicker-responding, with lighter weight and twin turbos comfortably compensating for the power deficit over its predecessor's 6.2-litre normally aspirated unit. The experience here though, isn't just about power: Mercedes set out with this GT to create the most involving driving machine ever to sit in its regular model line-up. Quite a claim. Quite a car? Let's find out.

'Mercedes builds a 911', screamed all of the enthusiast mags, who then stopped screaming that when they saw this car. The AMG GT is quite a different thing, power being delivered by a 4.0-litre twin-turbo V8 driving the rear wheels. The powerplant has an unusual layout, with the turbochargers not attached to the outside of the engine like most ancillaries, but housed inside the 'V' of the V8 - something AMG calls the 'hot inside V' configuration. At present, there are five distinct models on offer. The standard GT generates 476hp and 630Nm of torque and is offered in Coupe or open-topped Roadster guise. Next up in the hierachy is the GT S Coupe, a model good for 522hp and 670Nm. Both are hugely quick, as you'd expect: the GT gets to 62mph in 4 seconds and runs on to 189mph, while the GT S edges it, recording 3.8 seconds to 62mph and a top speed of 193mph. If for some reason that's not fast enough, both body styles are also available in a 557bhp GT C guise. Or in a top 585bhp GT R variant that was race-tuned on the Nurburgring Nordschleife. Coupe buyers can also specify an even more focus GT R PRO version. Across the range, drive goes to the rear via a seven-speed AMG DCT-SPEEDSHIFT dual clutch gearbox. This rear transaxle system offers decent weight distribution, with 47 per cent of the car's weight up front and 53 per cent aft. Depending on the model, the transmission offers up to five different driving modes: 'controlled efficiency', 'sport', 'sport plus', 'individual' and 'race' - the latter offered exclusively on the GT S. All versions are fitted with a standard locking differential. The GT receives a mechanical unit, while in a move that might be opposite to that which you expected, the GT S is fitted with an electronic version. The GT S, GT R and GT R PRO variants also get active driveline mounts which continuously isolate the mass effects of the engine and transaxle. 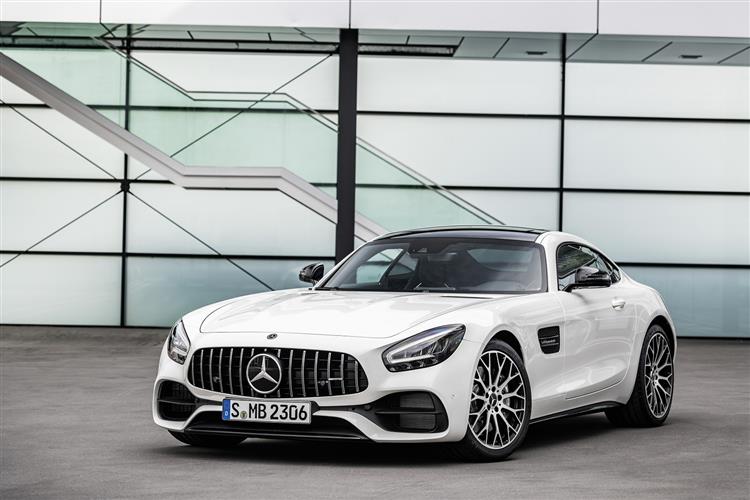