CLASS OF ONE (some text hidden)

BMW demonstrates that coupes can have a sensible side with its 218d. Jonathan Crouch reports.

BMW's best 'real world' car might well be the 218d Coupe. You get the typical BMW coupes compactness, lightness and rapid responses of a good BMW coupe yet prices start at less than £25k and economy is rated at 62.8mpg. That's quite a span of talents.

Start seriously thinking about buying a new car and you'll very quickly arrive at a stark realisation. Your money doesn't go very far. By the time you've added options and on-road costs, you begin to realise that the monthly repayments have stacked up so far, all you'll be able to do is polish the thing and protect your residual values which defeats the object of buying a car in the first place. The ideal package would be a good looking car that was fun to drive, kept hold of its value well, was so economical you'd drive it just for the fun of it and which gave you a kick to own. Oh yes, and didn't cost the earth to buy. That sort of wish list has often remained just that, idle wishes, but with the launch of the 2 Series Coupe, BMW has brought a car to market that might just fit that bill, especially in 218d diesel form. Priced from less than £25,000 and shot through with all of BMW's engineering right stuff, the 218d looks the real deal.

Okay, so a 218d doesn't exactly sound as if it'll melt tarmac. Under the bonnet is a 2.0-litre diesel engine that's a detuned version of the 190bhp unit found in the 220d. In this guise you get 150bhp and 320Nm of torque which isn't at all bad. By contrast, a Volkswagen Golf GTI makes 350Nm so you're not too far off that sort of overtaking muscle. The 218d is quicker off the line than you'd expect for a diesel too, getting to 62mph in just 8.4 seconds and running onto a top speed of over 130mph which means that you won't find yourself rowing the thing along the outside lane of the M1. These BMW two-litre diesels might be brawny but they're not the most refined engines in the world and they are vocal when you really open the taps. Many drivers will be tempted by the optional adaptive dampers at £750, and they work particularly well on UK roads in Comfort mode, giving a decent suppleness to the ride quality. Even in Sport mode they're usable on a B-road. The 2 Series chassis is communicative and signals its limits of grip really well. You're always aware that drive is going to the rear wheels when piloted enthusiastically and the steering is one of the better electrically assisted setups in its class. 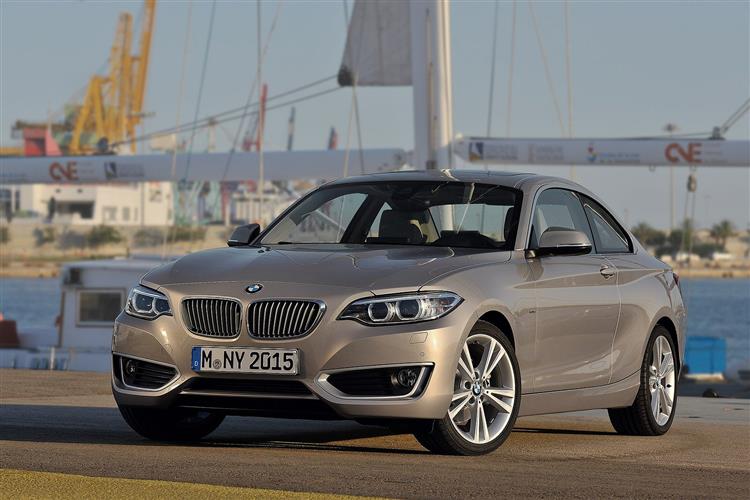