STING WHEN YOU'RE WINNING (some text hidden)

The Corvette is back in awe-inspiring Stingray guise. Jonathan Crouch reports on an American car claiming cornering prowess to match the best of its European rivals. Which would make this a very unusual US supercar indeed.

The Corvette Stingray is a machine that deserves to be taken very seriously. If you like the idea of a car that's just as capable as a really good Porsche 911 but costs less and is loaded with charisma, here's your ride. With 455bhp and a price tag just north of sixty grand, it looks solid value.

After much conjecture, the C7 generation Corvette has arrived and although it's certainly a more evolutionary design than some were expecting, it's nevertheless a model that's got the chops to shake up the established order. Its predecessor had established a reputation for being a car that handled well and went like stink and later versions of the C6 even started to feel reasonably well screwed together inside; certainly a long way ahead of the plastic dungeon that was the C5 'Vette interior. The C7 improves perceived quality again but if you want Audi-style soft-touch, silcon-damped everything, you're probably looking at the wrong car. The Stingray is all about a charismatic V8, big performance and all the other things that you suspect might one day be legislated out of existence. Get it while it's hot.

Let's put a couple of misconceptions about the Corvette to bed. It's not a big and heavy car. This Stingray model doesn't take up much more space on the road than a Porsche 911 and it weighs 1,562kg - significantly less than even an entry-level V6 Jaguar F-TYPE. It also does the go, stop and steer thing like no Corvette to date. It'll go quicker through a slalom and hold higher lateral g figures than a Porsche Cayman S and it'll outbrake one from 60mph as well. All UK cars are fitted with the Z51 performance pack, which includes an aero package, upgraded suspension and an electronically controlled limited-slip differential. Larger wheels (19-inch front and 20-inch at the back) and brakes (345mm front, 338mm rear) are also included. The C7-generation car's magnetic ride control suspension has been specifically tuned for British roads, so ride quality is a big step forward compared to the C6. Downsides? Well, you'll be sitting on the wrong side of the car. We were promised right-hand drive Stingrays and Chevrolet is still insisting they'll arrive but for the time being at least, you change gear with your right hand. There's a choice of a seven-speed manual or a six-speed auto box. Go for the manual - it auto blips the direct injection engine on the downchange and requires a lot less effort than the old stick shift. A popular option will be the performance exhaust system which sees the engine's output climb to 460bhp and 465lb ft. Even without it, the Stingray will get to 60mph from standstill in less than four seconds. 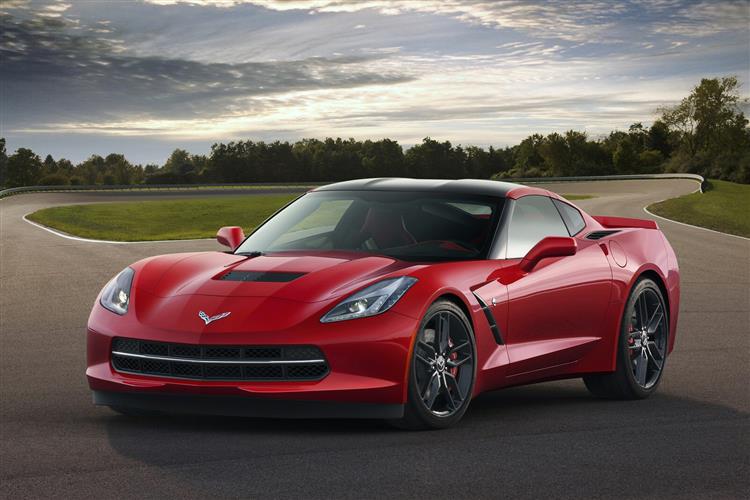