Between 2008 and 2013, Renault delivered a convincing 1-2-3 in the hot hatch sector with its Renaultsport versions of the Megane, the Clio and the Twingo. The latter is perhaps the least celebrated of the three, despite being easily the most accessible. Launched in 2008 and revised in 2012, it's the later improved facelifted version of the car we look at here, a guide in which we'll be assessing the value of the used examples that were sold from early Summer 2012 until the model's eventual deletion from Renault's books in 2013.

The Twingo Renaultsport 133 was a car that never really got the recognition it deserved. Had it been a stand alone sports hatchback in a range of mediocre cars, its light would probably have shone a bit brighter but a 133PS hatch isn't going to challenge for top billing when there's one with twice that power being sold across the same showroom. This means that while it's been a slight disappointment in terms of new car sales, it makes a great used buy. The car was originally imported in 2008, quickly vying with the Suzuki Swift Sport as the small car to go for if you wanted some inexpensive jollies behind the wheel. The revision that we look at here happened relatively late in the Twingo's lifespan, the facelifted car arriving in UK dealers in June 2012. By August 2013, Renault UK were putting the word out that they had just six new cars left in stock and these were rapidly snapped up ahead of an all-new replacement arriving in 2014.

What You Getword count: 266

It's said that little dogs are more likely to bite and this Twingo isn't shy of baring its teeth. Hearing that Renault had fitted a deep front spoiler, a huge rear wing, side skirts and enormous alloy wheels to this car, you might fear the worst before you even set eyes on one: surely, this can't be anything other than a painful example of Max Power excess? In actual fact, it looks punchy and purposeful, the extrovert look balanced by careful touches like the gloss black detailing and the chrome tail pipe, while the 17-inch alloy wheels on this Cup chassis version look just brilliant. This facelifted version is certainly a little more in-your-face with its smarter four-light front grille design and a front bumper incorporating what Renault calls an 'F1 blade'. At the rear, this hot Twingo has a revised double-cluster light arrangement and is set apart by its black spoiler, a bumper design that builds in a diffuser and aerodynamic wheel arch extensions. The theme continues inside. A pricier MINI Cooper or a Fiat 500 Abarth would certainly feel more upmarket but this Twingo eschews all that in its mission to distil its offering down to the things that really matter. So as well as the Renaultsport logos, you get chunky sports seats that now have extra side bolstering, a perforated leather-trimmed steering wheel, aluminium for the pedals and gearknob and a prominent rev counter with a number font that gets bigger as you approach 7,000rpm, plus a stitched marker on the steering wheel to indicate the straight ahead position. It's all proper stuff. 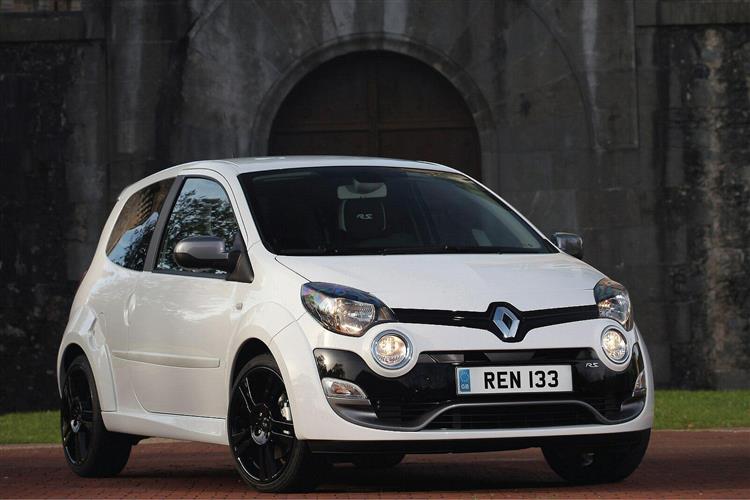