THE GRAND PLAN (some text hidden)

Choice is all well and good but just occasionally it becomes overwhelming. Renault's Grand Scenic range used to be a huge, amorphous tangle of trim levels, equipment packs and confusing engine choices. It was difficult to walk into a dealership and find just the right one from the hundreds of possible combinations. At the end of 2011 though, things changed. Renault had a bit of a moment, sacked many of its dealers, took the axe to the underperformers in its model range and pared the Grand Scenic range back to just the highlights. Here's how to bag a decent used example of a car from the 2012 to mid-2013 period.

The Renault Grand Scenic might not get the acclaim of its smaller sibling but it's been a big seller here in the UK, with customers appreciating the extra utility its seven seat configuration affords. The third generation Grand Scenic was first shown at the Paris Show in 2009 and it was designed to stop the gradual erosion in sales the model had suffered at the hands of seven-seat rivals such as the Vauxhall Zafira and the Citroen Grand C4 Picasso. Intially things went well, but by 2011, the Grand Scenic was once again slipping down the sales charts in its segment. Renault's response was to introduce a lightly facelifted version with some clever new hi-tech equipment and an intriguing new 1.2-litre petrol option all based around a single highly-equipped Dynamique trim variant. That's the car we're focusing on here.

What You Getword count: 899

As for practicality, well, being very nearly the size of the huge Espace MPV that Renault by this period no longer made, this car should be big inside, and is - to a point. A Grand Scenic is a promising 216mm longer than the ordinary five-seat Scenic model but because just 63mm of that is used to extend the wheelbase, the cabin doesn't feel much bigger. The extra length certainly isn't quite enough for this car to be able to take seven full-sized adults in long distance comfort. The difference here though over most compact seven-seater MPVs is that with a few compromises, you can get close. The seats in the second row slide collectively or individually backwards and forwards, so you can set them to offer good legroom for second or third row passengers, though not both. Mostly, owners will probably choose to maximise second row legroom and keep the back two seats for kids or adults on short journeys. Getting to that back row requires a certain level of agility that may tax Grandma on your Sunday outing with her and the kids to the local garden centre. Still, once she's in place and the seat backs ahead have been suitably tweaked forward, she should be comfortably enough to avoid leg stretching exercises in the coffee shop when you arrive. Headroom for taller folk may be a bit limited though. There are no such issues in the middle row of course, providing of course you don't have to give too much away to those behind. Three individual chairs are provided and all can slide and recline to offer greater comfort on longer journeys. It's here you realise what a triumph of child-friendliness this cabin is, with door pockets designed for drink bottles, blinds for the windows and even a couple of concealed under-floor storage spaces. We like the thoughtful touches too. Like the design of the tray tables which sees them recessed into the seat backs so as not to clout your kids' knees. And the way the centre storage box can slide forward so that there's ample legroom in the centre middle seat. If you have pushed that storage box right forward - as you might do so the middle rear seat can be pushed right forward so that, for example, you can keep a better eye on a child in a booster seat - then up-front, you'll find that it rather gets in the way of the two main cupholders in the centre console. Just as well then, that there are many more drinks holders dotted around the interior, part of a plethora of storage that runs to forty different compartments collectively creating 83-litres of storage space, so locating a lost Yorkie bar or set of keys could be the work of more than a few minutes. For front folk, that includes a huge chilled glovebox and useful under-seat storage slide-out trays. But there are many other reasons why a seat at the wheel of this Grand Scenic is such a pleasant place to be. The large wide windscreen makes the cabin feel spacious and airy - even more so if you've opted for the huge panoramic glass sunroof. Plus the driving position offers loads of adjustment, with a seat that can be jacked so high that even the shortest driver gets a commanding view. The soft-touch sweeping dashboard design that shows how far Renault has come in recent times in its pursuit of perceived quality and there are some very classy touches like the full colour TFT display that you can tweak to your own colour choice. You can also specify a useful extra mirror to more easily watch what the little horrors are doing. To keep them all quiet, there are three 12-volt power sockets around the cabin so that games consoles and MP3 players can be topped up. And luggage capacity? Well, as you might expect, if you're travelling seven-up, there isn't much - just 208-litres. Still, that'll be enough on your annual holiday if you also buy into the optional roofbox your Renault dealer will be happy to sell you. For the other fifty months of the year, the space on offer here will doubtless be quite sufficient. After all, once you use the easy one-touch motion to fold the rearmost chairs flat into the floor though, this area can be increased to 564-litres. That's easily enough for, say, a couple of bags of golf clubs and a baby buggy, but if you want more yet still need to carry five passengers, you can slide the second seating row forward to create up to 702-litres of space. Going further still requires you to fold the second seating row up against those at the front - sadly, they won't fold flat into the floor. That'll bring you to 1,863-litres - but you can go further still. If you've space in the garage and you're strong enough of back, you can remove the three chairs completely, to free up a massive 2063-litre space with a load length of around 2.5m. Such a performance is this process though that you've really got to want that extra couple of hundred litres of room. At least really long items can be catered for without seat-removal antics thanks to a front passenger seat that can be specified to fold forward for the carriage of really long items. 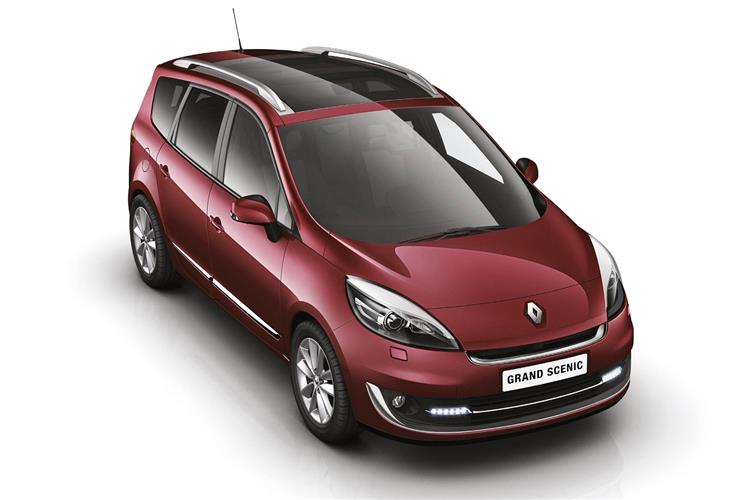