If there's one thing that contemporary sales of small cars has shown us, it's that buyers don't like small cars. That might seem odd given the skyrocketing sales of superminis and city cars but bear with me here. In each respective class, it's often the car that stretches the size limits at the top of the class that wins out in terms of sales. Renault has cottoned onto this fact, which is why the Twingo is one of the larger city cars, and the Clio III that we examine here went straight to the top of the supermini tree in terms of size when it was launched in 2005. As a used buy it makes a lot of sense. It's big, well built and extremely safe.

Although its predecessor had only been on sale for four years, Renault realised that the Clio formula needed a radical freshening rather than a nip and a tuck here. Huge incremental sales increases for cars like the Honda Jazz had shown that when it comes to superminis, size mattered. Customers were no longer content with rear seats that fitted only children, nor were they particularly interested in luggage bays that forced them to buy a roof box if they were going away for anything longer than a weekend. Making a suitably sizeable car and making it feel well built and safe at the same time as being sprightly and economical may have seemed like an unsolvable task to Renault's designers at first but the compromises they thrashed out work extremely well. The Clio III lifts the car into a new realm of sophistication and buyers have responded. The three-door cars started arriving in dealerships in September 2005 with some diesel engines delayed until November of that year. January 2006 saw the introduction of the more family-friendly five-door models but it wasn't until June 2006 that we got the racy Renaultsport 197 three-door car, followed by the even more focused R27 version in June 2007. Slotted between these two fire breathers came the high-spirited 138bhp Dynamique S trim in November 2006. In Summer 2007, Renault introduced a 100bhp 1.2 TCE powerplant charged with replacing both the 1.4-litre 16v 98 and the 1.6-litre VVT 111 petrol engines. Winter 2007 saw the arrival of the Renaultsport 197 Cup model. A stripped down version of the 197 with firmer suspension, this model was aimed at trackday fans. At the same time, all Renault 197 models were given taller 5th and 6th gears to answer criticism that the car was noisy when cruising at high speeds. The Sport Tourer estate model made its debut in summer 2008 with 50% extra boot space in tow. Whatever Clio III you want, finding a used example shouldn't be too hard. There is a lot of stock to choose from, so be fussy and negotiate hard. In August 2008, Renault introduced a new line-up for the Clio III, with improved specification and more standard equipment. The Clio three-door range consisted of four trims, Extreme, Rip Curl, Dynamique and Dynamique S, whereas the five-door now had five trims: Expression, Rip Curl, Dynamique, Dynamique S and the range-topping Initiale. Prices were changed to include more standard equipment for a lower price. In August 2008, Renault announced a change the trim level line-up in the Clio 111 range. Extreme became the entry-level trim for the three-door models while Expression became the starting point for the five-doors. Rip Curl, Dynamique, Dynamique S and the range-topping Initiale completed the line-up. More significant changes surfaced in May 2009 with a comprehensive facelift bringing a more angular front end, better refinement and improved interior quality. The GT trim level was introduced as a bridge the Renaultsport hot hatch which in turn got more power and Renaultsport 200 branding.

At 3.99m long, the Clio III is a full 174mm longer than its predecessor and despite those elegant lines, 45mm of extra height has been slyly grafted in. The result is a car that's a far more spacious proposition without appearing frumpy or gawky. Peugeot tried this and failed with the 307 and SEAT only just managed it with the Leon but Renault have worked the compromise between space and styling better than both. What's rather surprising is that initial designs of the Clio III resembling a shrunken Megane were not carried through. The Clio is instead a far more conservative design than its bustle-backed big brother, the five-door car in particular looking remarkably conventional for Renault, a company that prides itself on design innovation. Nevertheless, it's still an undoubted good looker with broad shoulders that frame the rear light clusters and a more sculpted appearance at the front end. The trim level range is split between the sporty 3-door and the practical 5-door cars. The 3-door is line-up runs from Freeway and Extreme to Expression, Dynamique, and Dynamique S before topping out at the blistering Clio Renaultsport 197, while the 5-door model is offered in Authentique, Expression, Dynamique, Privilege or Initiale form. All models get power steering, a trip computer, body-coloured bumpers and side mouldings, remote central locking and a height adjustable steering wheel. Along with the Modus, the Clio III is the first car in its segment to offer additional beam cornering headlamps, while double distance xenon headlamps are also available for enhanced night visibility. The Clio III's structure includes a number of programmed deformation zones and has been designed to function with Renault's third-generation System for Restraint and Protection. This includes up to eight airbags, incorporating two adaptive front airbags complete with load limiter and double pretensioners for the front seats. If you must crash, at least have the foresight to do it in a Clio III. 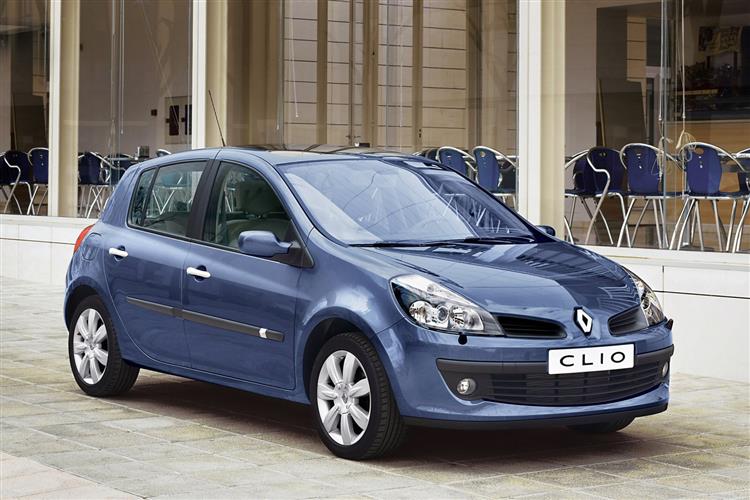