The Mercedes-AMG SL63 is a model that successfully bridges the gap between luxury roadster and outright sports car. Jonathan Crouch checks out the improved version

The SL63 is a model that previously never got the recognition it deserved in Mercedes' SL Roadster line-up. The mainstream models always sold more, while the bigger-engined SL65 variant got the headlines. Don't let that deter you. This latest 585bhp car is arguably the best SL that Mercedes have ever made.

Some cars gain themselves a reputation that's out of all kilter with their talents. Overrated, overpromoted and overachieving, they pull a confidence trick, trading short term revenue gains for long term reputational damage. It's a bargain many manufacturers are prepared to take. Then there are the cars that work the opposite way. They offer a bigger reward to the owner than their billing suggests. The AMG-engineered SL63 version of Mercedes' SL Roadster has long been such a car. The headliner in the Mercedes-AMG SL range is the V12-engined SL65, but this V8-powered SL63 makes a lot more sense. In this upgraded form, it features a 5.5-litre 585bhp unit that's virtually as quick as the V12 model and much more efficient. It's a wiser pick.

This generation SL model replaced the screaming 6.2-litre V8 of its 'R230' series predecessor with a twin-turbocharged 5.5-litre eight cylinder unit that now puts out 585bhp. Where the old engine needed to be revved like crazy to give of its best, the blowers on the 5.5-litre unit serve up instant urge at almost any engine speed. The soundtrack is different, but Mercedes' engineers have amped up the drama from both intake and exhausts to deliver some aural fireworks. How fast? Get it on a really grippy surface in perfect conditions and you may jmanage 4.1 seconds to 62mph. This car is far lighter than previous generation SL models thanks to extensive use of aluminium in the chassis and the addition of a carbon fibre bootlid. Mercedes quotes a figure of 125kg, but that still means this is an 1845kg car that needs to be managed around a corner. The 'Speedshift' MCT 7-speed transmission is a very smart unit, better suited to a car of this type than the old 7G-Tronic system and while it's quick to ping up through the box, it can occasionally refuse a downshift. Like the rest of the range, the SL63 gets electro-mechanical power steering. Some manufacturers have got such systems almost up to the feel of a good old hydraulic system. Mercedes hasn't as yet, but it's getting there. Plus there's an AMG Sports Exhaust system and the 'AMG Dynamic Select' driving modes set-up, which allows you to tailor the feel of the car to suit the way you want to drive. 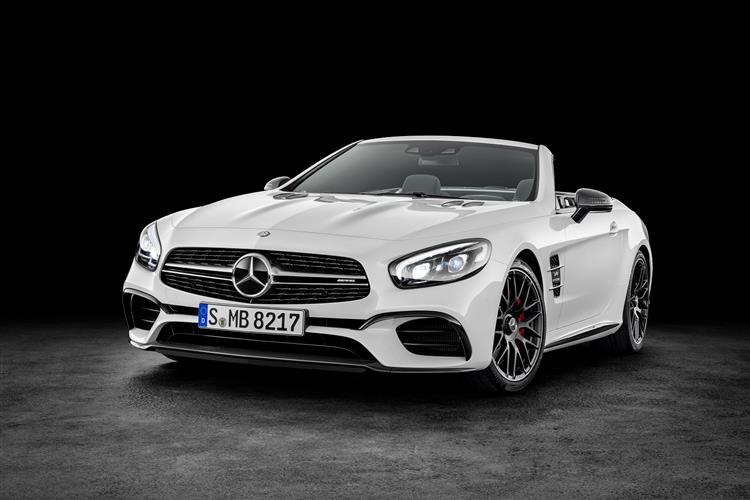