BATTERY UP (some text hidden)

The Toyota Yaris Hybrid takes some of the tech that has made the Prius such a massive hit and miniaturised it. Jonathan Crouch checks out the revised, now more affordable range.

Hybrid technology features in every Toyota Yaris trim level and a recent package of improvements has made this petrol/electric supermini model smarter, plusher inside, better to drive and quieter. Oh and did we mention it still can record over 85mpg?

Petrol electric technology has worked well for the Toyota Yaris and the result is that hybrid variants accunt for an increasingly large proportion of total Yaris sales. It's also helped that this model has been refreshed in recent times as part of a general Yaris range update that incuded 1,000 new parts and saw 576,000 man hours of development. Though this wasn't the market's very first hybrid supermini, it was the first able to improve upon the running costs of comparable eco-conscious diesel models in this segment, while matching (or beating) them on price. Which has made this model a game-changer in its town-targeted market sector and, in theory at least, an impossible option to ignore for those who spend much of their lives in the kind of stop-start traffic where hybrid technology really comes into its own. Let's put it to the test.

The Yaris Hybrid is powered by a combination of a 1.5-litre petrol engine and a small electric motor which together combine to produce a modest 100PS. That might not sound much, but such is the torque of the motor that it feels as if it's got the lazy flexibility of a bigger engine which is exactly what you want around town. You can pull away and drive just over a mile purely in electric mode if you're light on the throttle and when the petrol engine does kick in, it's anything but uncouth. Drive goes to the front wheels via an e-CVT continuously variable transmission and the turning circle is, at 4.7 metres, just as tight as the regular Yaris. The power pack is effectively a downsized version of that featured in the Prius, with a more compact electric motor, transaxle, inverter and battery pack. With this revised model, the engineers have tweaked things quite a lot, adding in a new subframe, as well as changing the engine mounts and front driveshafts and adding in a roll restrictor. All of this is claimed to make the car even quieter and smoother, particularly under acceleration. As before, this model is at its best in stop and start city traffic. Ride quality retains a decent suppleness, courtesy of a supple torsion beam rear suspension. The steering is also sharper than you might expect. 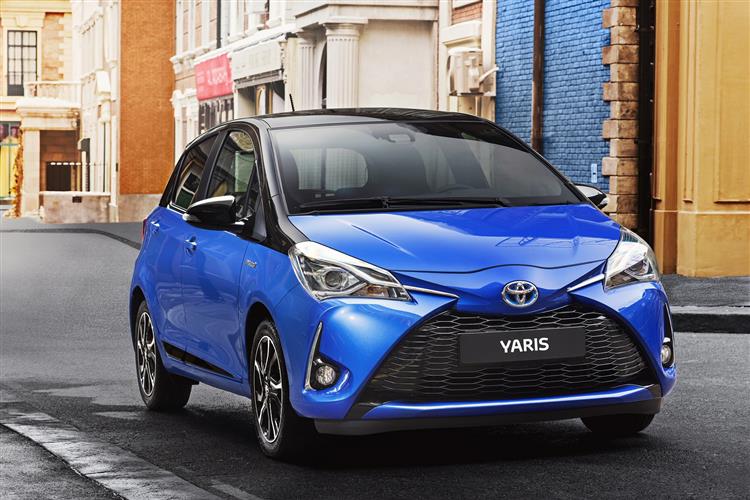