Pick-ups are undeniably practical but have a reputation for being rough and ready with crude driving dynamics. Volkswagen's Amarok set out to change all that and the latest version's cause is aided by a lusty six cylinder engine range. Jonathan Crouch reports.

Oriental models have for too long held sway in the UK pick-up truck market, a state of affairs that Volkswagen set out to change when they launched this Amarok model in 2011, then updated it in 2016. Big, economical and very capable, Volkswagen's off-road load-lugger was designed to give the Japanese contingent a few sleepless nights but originally boasted a 2.0-litre diesel line-up in a class where rivals had 2.5 or 3.0-litre units. Hence the development of a lustier six cylinder 3.0-litre TDI unit for this latest version claiming an effective mixture of power and efficiency. The result should be a very complete pick-up indeed.

Pick-up sales may have taken off in Europe over the last decade or so, but the vehicles themselves have come almost exclusively from the Far East, Japan dominating the market with Mitsubishi's L200, Nissan's Navara and Toyota's Hilux, leaving Ford a few scraps to hoover up with their Thai-built Ranger model. So what kind of pick-up might a European brand design? How would it be different? In this Volkswagen Amarok back in 2011, we got our answer in a vehicle that's sold steadily since but has been ultimaely limted in its aspirations by the fitment of a 2.0-litre diesel engine that's smaller in size than the class norm. That's important as pick-ups need torque - and plenty of it. Hence Volkswagen's development of the new 3.0-litre V6 TDI unit for the improved Amarok model we're going to look at here. Like its predecessor, this is claimed to be the most car-like vehicle of this kind ever made. Potentially then, the perfect solution for SUV buyers who want the greater practicality of pick-up motoring.

A tough ladder-framed chassis and a solid, leaf-sprung rear axle necessary to carry heavy loads offer the inevitably utilitarian feel. Within the confines of this approach though, the Wolfsburg engineers have actually done a very good job in making this Amarok as car-like as it reasonably could be. The introduction of 3.0-litre V6 TDI power means that there's nothing wrong with the performance now on offer, this unit available in three guises offering either 163, 204 or 258PS. The pokiest unit develops 580Nm of torque at just 1,500rpm. UK customers can choose from selectable (with manual gearbox) and permanent (with auto) 4MOTION four-wheel drive. An optional mechanical rear-axle differential lock is also available for demanding off-road use. On the road, this Amarok should feel sharper to drive courtesy of a new Servotronic steering system. Plus new 17-inch brake discs on the front axle and 16-inch discs at the rear ensure that this pickup always comes to a stop quickly and safely. 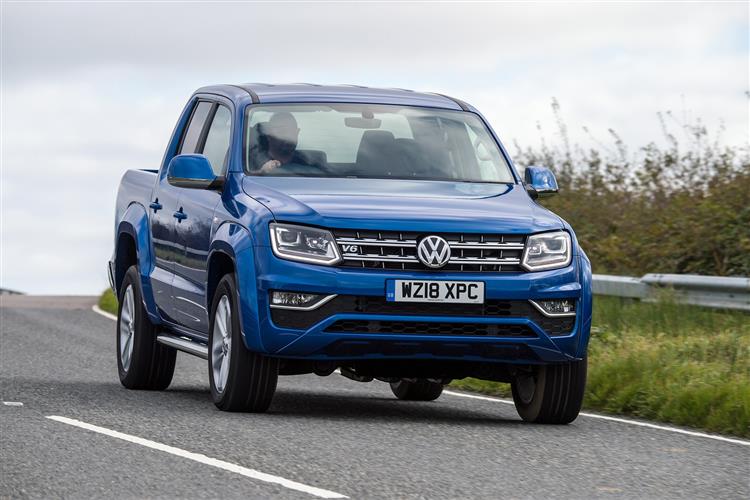