Ssangyong's Korando has previously been something of a fringe player in the value reaches of the mid-sized SUV class, but this MK4 model aims to edge into the mainstream. It's well equipped, rather smart and can tow up to 2.0-tonnes. Sounds promising.

Buying a mid-sized family-shaped SUV can be an expensive business these days. The ones you can have for anywhere near £20,000 tend to offer weedy performance and a relatively cramped interior. It's far more typical to be paying £25,000-£30,000 for a 'Qashqai'-class family hatchback-based Crossover of this kind and many plusher models sit in the £30,000-£40,000 bracket. So what are we to make of this, the fourth generation version of Ssangyong's Korando? From launch, prices were pitched at a genuine £20,000, with a really nice one pitched at under £27,000. This model's also better equipped than most comparable rivals and can tow heavier loads. But all of this you'd maybe expect from a Ssangyong. Can this one though, offer a properly class-competitive proposition when it comes to things like fit and finish, drive dynamics, efficiency and safety? Let's find out.

Two engines are available to prospective Korando customers. The petrol choice is a 1.5-litre GDI-turbo unit with 163PS and 280Nm of torque which can only be had with front-wheel drive. It's usually mated to 6-speed manual transmission but the top-spec version can alternatively be had with an auto gearbox. The other main choice (and the one that this car's core caravan-trailing and towing market will want) is the 1.6-litre diesel, which has to be had with an auto gearbox. Here, you get 136PS, but far more pulling power - 342Nm of it; enough to allow the car to pull up to 2.0-tonnes. If your Korando has the 6-speed automatic transmission, it'll also come with selectable 'Normal', 'Sport' and 'Winter' drive modes. Unlike most of its rivals, the diesel version of this Korando is available with a capable all-wheel drive system, this one featuring 'Automatic Drive Control', which ensures that the speed of each wheel is individually monitored in real-time. If a wheel slip is detected, torque is automatically redistributed to the wheel where it is needed most, thus maximising traction over treacherous roads. You'll normally drive with the AWD system in its 'Auto' mode, but for traversing really arduous terrain, there's a selectable 'Lock-Mode' option which increases torque delivery to the rear wheels for improved traction and stability. 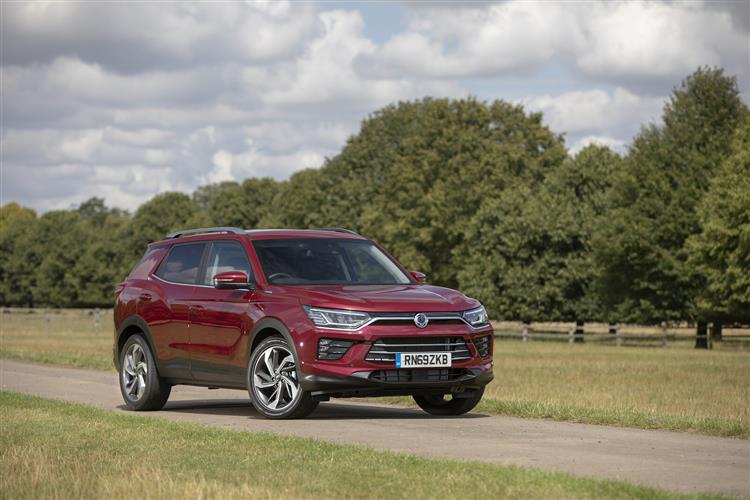