A QUESTION OF CLASS (some text hidden)

Lexus has improved its CT200h hybrid to try and tempt more buyers in the compact executive segment over to petrol/electric power. Jonathan Crouch checks it out

If you're seeking a spaciously compact, prestigiously badged premium five-door hatchback, then you're probably thinking diesel power and German badgework. Here's a different way to go, Lexus' improved first generation CT200h petrol/electric hybrid. The original version of this car needed a little perfecting but it's now a far more credible choice that's classy to own, efficient to run and kinder to the environment.

Hybrid power may be a trendy thing to have in the compact executive segment right now but it certainly isn't a cheap option. You'll need a budget of around £35,000 to £40,000 for the BMW 3 Series or Mercedes C-Class options and even Lexus' own IS300h is a £30,000 car. Hence the appeal of the brand's entry-level CT200h model, which starts from around £25,000 and even at that point is well specified. That's possible because this car runs on humbler non-Plug-in Toyota Prius underpinnings - mechanicals which are awarded more of a premium sheen with the adoption of the Lexus badge, especially in this improved model. 'CT' stands for 'Compact Tourer', Lexus-speak for 'Premium Hatchback', the class of car that sits below the 3 Series and C-Class segment that Lexus attacks with its IS model. Think models like Audi's A3, BMW's 1 Series, Mercedes' A-Class - maybe even Alfa Romeo's Giulietta and you'll get the idea. Cars that are no bigger than something Focus or Astra-sized but sit a world apart when it comes to perceived driveway cred. None of them offer a hybrid option - which is where this Lexus ought to score.

There are no mechanical changes to this revised CT200h, so the driving experience is much as before. Press the 'Start' button and the virtual silence is very, very different from the ugly, grumbly diesel note delivered by this car's competitors. That's because from start-up to speeds of up to 28mph or for distances of up to a mile and a half, the car (in theory anyway) is supposed to automatically operate in 'EV' mode under electric power alone. This brings me to the engine which, despite all this talk of electric power, will remain this car's primary source of propulsion in day-to-day use. It's exactly the same 1.8-litre VVTi petrol unit you'll find in Toyota's Prius and contributes a further 99bhp to the 82bhp already delivered by the electric motor, though never at the same time, which is why, slightly confusingly, the total power output of this car is quoted at 134bhp. Once you're up and running with battery and petrol power chipping in and out, there's a centre drive controller which you can set either to 'NORMAL', 'ECO' or 'SPORT', depending on how you want to drive. The 'SPORT' setting delivers an extra 150V of extra electric motor power to enable a rest to sixty sprint time of 10.3s as engine revs are held longer, throttle and steering response sharpened and the traction and stability control systems rendered less intrusive. On the move, the re-tuned suspension that Lexus introduced in 2014 has improved the original model's unforgiving ride. At that time, the brand also remapped the hybrid drive system's transmission control. This allows for a more linear build-up of engine revs, more closely matching the increase in vehicle speed. The result is a driving experience more akin to a conventional automatic transmission. 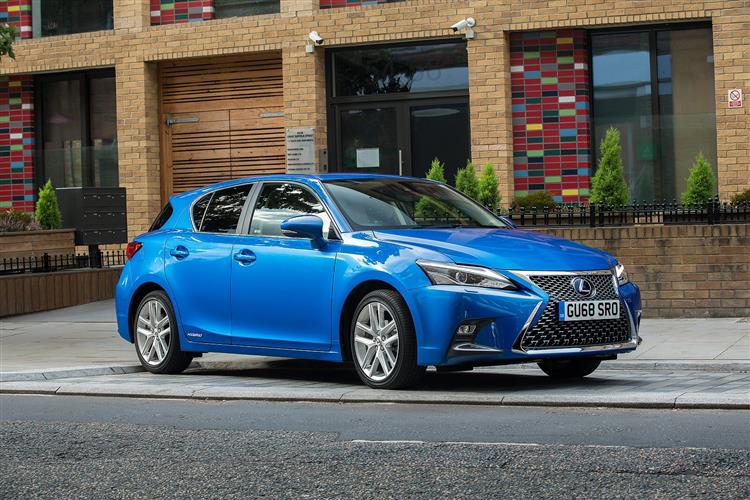