SMALL BUT ROCKING (some text hidden)

If you're just about to sign a cheque for a rather run-of-the-mill used citycar made in the 2017 to 2019 period, then pause for a moment and take a look at this, the Vauxhall VIVA ROCKS. True, it'll appeal to a pretty narrow buying demographic but within that, there'll be those that might really like what this little runabout is trying to be.

The idea of a citycar SUV might sound like a contradiction in terms. Well, let's be honest, it is a contradiction in terms. But it's also a bit of fun, so why not? That was Vauxhall's reasoning anyway when it introduced this car, the VIVA ROCKS. Just about every market segment seems to offer an SUV option these days and the citycar sector is no exception. In theory, we've actually had models of this sort ever since 2004 when Fiat launched the Panda 4x4. That though, actually was a model with some sort of 'off piste' capability. In contrast, the idea this Vauxhall advanced - that of a small runabout simply dressed in crossover clothes to attract a younger audience - was, back in 2017 at this model's launch, quite a recent thing. Or at least it was in the citycar segment. We've seen the concept floated by a varied selection of slightly larger superminis at various times in the last couple of decades, with contenders like the Rover Streetwise, the Volkswagen Polo Dune, the Citroen C3 XTR and, a little more seriously, with the Suzuki Swift 4x4 and the more recent Ford Fiesta Active. When at last, the major brands were prompted by their marketing departments into doing the same thing with tiny urban runabouts, again it was Fiat who took the lead, launching their Panda Cross in 2017, an introduction closely followed by the arrival of the extrovert Suzuki Ignis. Others then also joined the party, bringing us a further selection of SUV-style citycars like Kia's Picanto X-Line, Ford's KA+ Active and, later in 2017, this VIVA ROCKS model. The VIVA was in particular need of this kind of marketing spin, with sales slowing after this modern era model's original 2015 launch and a buying demographic heavily orientated in the over-Fifties. By 2017, Vauxhall urgently needed to court younger customer with this car, hence the vital need for this ROCKS version, a variant that aimed to appeal to them quite a bit more. The body cladding, smarter wheels and higher ride height made a stronger streetside statement. Plus the brand hoped that twenty-something folk would be pleased by the potential for class-leading standards of interior media connectivity and the option of Vauxhall's clever 'OnStar' personal connectivity and service assistant set-up. The Viva line-up was dropped from the Vauxhall range after the brand's takeover by the PSA Group, sales finally ceasing in 2019.

What You Getword count: 553

Vauxhall told us that this VIVA ROCKS. You'll have your own perspective on that but it certainly looks a good deal more eye-catching than the standard model thanks to its high-riding stance, chunky black bumpers and silver roof rails. You'll not be tempted to drive it over boulder-strewn tracks, but it'll certainly make more of a splash in the supermarket car park. A VIVA you could own without the neighbours necessarily assuming it'd been acquired using a Mobility allowance. And inside? Well up-front, Vauxhall promised us a 'new interior' here. It didn't deliver that of course. In fact, the only unique cabin aspects of a 'ROCKS' model lie with this variant's chrome-effect door sill covers and the seat trimming. The upholstery gets 'Jet black Favo' fabric trim finishing with plain black side bolsters and surrounds. There are reasonably-sized door pockets and two drinks holders in the front centre console. Plus plenty of cubbies for squirreling away your personal belongings, with the small storage areas above the centre console and above the reasonably-sized glovebox being especially ideal for things like smartphones and loose change. Once you're settled, you might find that this isn't the easiest citycar to see out of: the stubby nose dives away out of sight and the narrow rear screen would make us want to seek out a car fitted with the optional rear parking sensors. Still, it's easy to get comfortable, despite the fact that the Corsa-derived three-spoke multi-function steering wheel adjusts only for rake not for reach. The seat is quite supportive - and height-adjustable as standard across the range. Ahead of you lies a simple but classy two-dial instrument cluster, with the main two gauges separated by a trip computer and chunky switchgear that operates with a solid click. Over to your left, a smart gloss black-trimmed panel surrounds the clear and neatly presented stereo, mounted nice and high up so you don't have to take your eyes off the road for too long to use it. Lower down on the central stack are the controls for ventilation and the air conditioning system you won't get if you opt for the frugal ecoFLEX model. Everything's simple to use and as straightforward to get to grips with as operating a payphone. And in the rear? Well this car is 140mm longer than something comparable like a Volkswagen up and has over 100mm more wheelbase length than you'd get in a rival like the shared Peugeot 108/Citroen C1/Toyota Aygo citycar design. These are differences you notice sat in the back of this car. The Viva's back seat offers enough room for a six-footer to sit behind a similarly-sized driver. Out back, there's a 206-litre boot that's about average in size for this class. True, it can't deliver the amount of space you'd get in models from this period like Hyundai's i10, Suzuki's Celerio or the Volkswagen up/Skoda Citigo/SEAT Mii shared design. But it's equal in size to the cargo area you'd find in the Peugeot 108/CitroenC1/Toyota Aygo shared design and similar too, to the trunk size provided by rivals like Renault's Twingo and Kia's Picanto. There are a couple of hooks to secure shopping and if you need more room, then pushing forward the standard 60/40 split rear bench reveals up to 1,013-litres, though the seats don't fold completely flat. 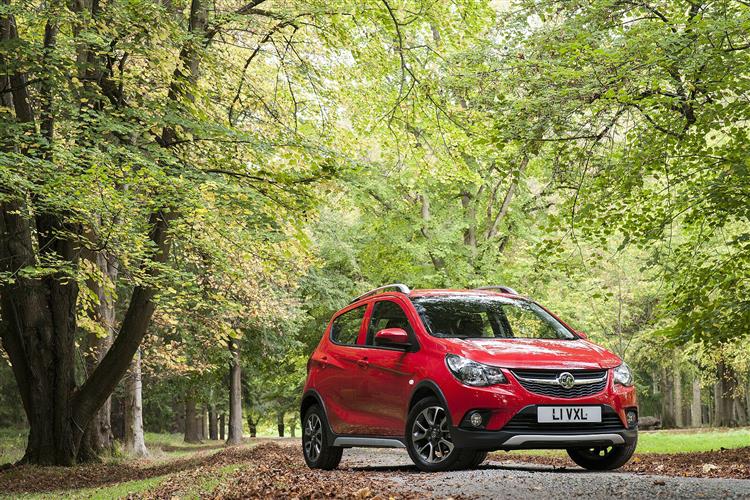