Having launched the KA+ in 2016, Ford improved it in 2018 with a significant package of changes and it was in this form that this model saw out its remaining production run, which ended at the beginning of 2020. Are these last KA+ models worth seeking out on the used market? They featured a more up to date three cylinder petrol engine, better infotainment provision and the option of a fashionable 'Active' body style for those wanting it. As before, particular strengths of this design include a spacious cabin and rewarding handling. Potentially then, there's a lot to like here.

A small car can have big ideas, even if it's city-sized. For proof of that, you've only to try the model we're going to look at here, the KA+. It was launched in 2016, then usefully revised in the Spring of 2018 to create the model we're going to look at here. You might know the KA model line. In its original first generation form, Ford's smallest contender was difficult to forget, bug-shaped, beetle-browed and hailed by many at its original launch in 1996 as the most innovative thing the industry had produced since the early Mini. Over half a million examples of the MK1 model were sold over a production run that lasted an incredible 12 years with hardly any changes. The car's success lay in its simplicity, which made it cheap to make and sell. It was a formula Ford should have stuck to. They didn't. In 2008, the second generation KA tried to move a little more up-market and offer a fashionable, slightly more affordable alternative for people who couldn't stretch to trendy small products like BMW's new-era MINI. But the Fiat 500 that MK2 KA was based upon was already satisfying these kinds of customers and doing so with cute credibility that the Ford simply couldn't match. That left the KA awkwardly placed, with a three-door-only bodystyle that didn't really save you much over a far more practical five-door Fiesta, once Ford dealers had done their sums. Sales were unsurprisingly disappointing. Hence the need for a different approach with this KA+, launched late in 2016. It wasn't adventurously styled - the Blue Oval brand's 'One Ford' global product policy by then discouraged cars of that kind - but in compensation, buyers were offered five doors in a KA for the first time and near-supermini-standards of cabin space. Low pricing was promised - and achieved thanks to an affordable Indian production plant and super-simple underpinnings borrowed from the old sixth generation Fiesta. Unfortunately, the engineware was also borrowed from that elderly design and the KA+ wasn't long in the showrooms before that began to feel a bit dated as part of a package that, to be frank, needed an extra injection of character. Hence the need for the heavily revised KA+ model range launched in 2018. The main petrol engine with this updated car was an all-new Ti-VCT three cylinder unit, there was a diesel option for the first time, equipment and media connectivity standards had improved and buyers could also specify an 'SUV'-style Active trim level at the top of the range. Lots of changes then, but they weren't enough to save the KA+, which was quietly deleted from the Ford range at the end of 2019.

What You Getword count: 671

Think of a Ford KA and if you know this product line, it's still quite hard not to picture the almost wilful aesthetic contrariness of the bug-shaped first generation version. There's nothing quite like that here, though for the 2018 updates, Ford did tweak the front grille, the front apron and the bumpers of the standard model, put they changed the headlamps and added C-shaped daytime running light mouldings in a bid to give it a little more aesthetic presence. If you want a KA+ that stands out a little more on the school run, you'll need the 'SUV'-style 'Active' version. From a profile perspective, the main difference with the Active variant over the standard car is a so-called 'Rough Road Suspension' package which raises ride height by 23mm. The black wheel arch mouldings add a bit of purpose too. We're not quite so sure about the rather awkward-looking silver roof rails but they certainly suit the whole lifestyle vibe. KA+ Active buyers also get unique grey-finished 15-inch 4x2-spoke alloy wheels: the same rims come with a silver finish on the ordinary 'Zetec'-trimmed variant. KA+ buyers who've tried other citycar-sector models are, we think, going to be very pleasantly surprised at the size of this Ford. Think of, say, a rival Fiat Panda. At nearly 4-metres long, this KA+ is a full 224mm lengthier than one of those. And it's a whopping 334mm longer than something like a Kia Picanto. As Ford likes to put it, what you're getting here is 'Big for the price of small'. The other thing you're getting, we should point out, is a small runabout that's a pretty insignificant 111mm shorter than a much pricier Fiesta. In place of the chiselled, slanty lines of a Fiesta, sense and sensibility reigns here, the boxy, glassy shape sticking to a regimented regime of horizontal creases. True, it's the kind of profile that could have been launched at a motorshow twenty years ago, but it's also still one that just works if you place a premium on practicality. Older folk will like the way that the extra ride height of the 'Active' model makes getting in slightly easier. The Ti-VCT engine isn't the only thing this facelifted KA+ model borrowed from an entry-level Fiesta. That supermini also donated this facelifted car's 6.5-inch 'SYNC 3' centre-dash infotainment screen, a standard feature providing you avoid entry-level trim. If you're not familiar with the SYNC package, it doesn't take long to adjust to it, with the central dash monitor divided into sectors that allow you to activate audio, 'phone or Mobile App options via either voice control or the touchscreen icons. You can't have navigation built into this package but you can stream a navigation app in from your 'phone thanks to this set-up's standard 'Apple CarPlay' and 'Android Auto' compatibility. Enough. Let's move to the area of this car that might really sell it to you - the back seat. This is where the extra body length we mentioned earlier really pays off, providing for a wide door that makes this the easiest citycar in the class for rear passengers to get in and out of. And once inside? Well there's certainly not much to complain about for a model of this kind, unless you're irritated by the lack of things like grab handles, coat hooks and door pockets. We've certainly been in plenty of Fiesta-sized superminis from the next class up that feel more cramped than this KA+ model's cabin. That tall, glassy roofline certainly helps and there's enough legroom for two six-foot adults to sit behind two front-seated friends of similar size. As for the boot, well an immediate irritation is the lack of any sort of tailgate handle but with this facelifted model, you do at least get a button to release the tailgate latch - you can also use the button on the ignition key or the one provided on the dash. Once the tailgate's raised, the 270-litre space revealed is the largest in the citycar class. 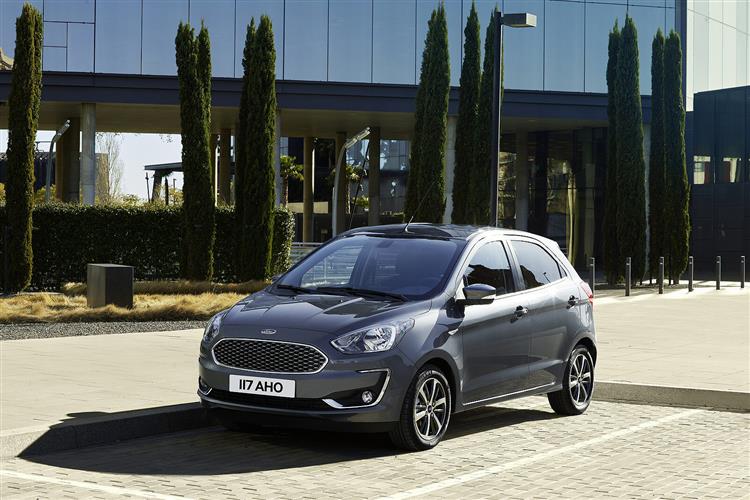