JUKING IT OUT (some text hidden)

Light, nimble and extrovert, the Nissan Juke was the original small supermini-derived SUV, combining attitude, irreverence, modish style and energy with a mischievous sense of fun. After the first generation model's original launch in 2010, plenty of would-be rivals attempted to copy its concept, prompting Nissan to introduce a whole series of improvements in 2014 to try and ensure continued segment leadership. That's the car we look at here as a used buy. As before, the result certainly won't appeal to everyone - but then that's because it isn't supposed to. It's aimed at the young and the young at heart, many of whom will continue to love this car and admire its designers for having the courage to do something different. Very different.

There's nothing quite like a Nissan Juke, part SUV, part sports coupe, part hot hatch - with a few bike and rally car genes thrown in for good measure. It sounds an unpromising mix but against the odds, Nissan made it work and in the first generation version of this car, defined once and for all what the market's smallest breed of crossover-class car should be like. The brand updated the MK1 design in 2014 to create the model in question here, adding detail styling changes, a larger boot, extra personalisation options and the option of a clever Google-linked multimedia system. As updates go, this was a pretty thorough one. In this form, the car sold until the second generation design arrived in late 2019.

This improved MK1 Juke got a revised front grille incorporating the smarter V-shape found on the brand's other models from this era but around it, the same delicious design details remained. Take the sidelights and indicators that burst up through slashes in the bodywork. Or headlights that are modelled on rally car foglamps from the Sixties and came redesigned in this revised Juke to incorporate LED daytime running lights and the option of xenon bulbs. Like the door mirrors with their LED side turn indicators, these could be ordered with colour-coded finishing. Also personalisable though a choice of colours were the trim panels on the re-styled bumpers at the front and here at the rear. Just above, below the integrated rear spoiler, the Nissan 370Z sportscar-style boomerang-shaped rear lights now also included LED technology for a distinctive night time signature. It's just as interesting inside. Though there are no expensive soft-touch plastics used, you don't really notice, such is the design exuberance. Take the centre console from which the gear lever protrudes - modelled to resemble the top of a superbike's fuel tank and finished in either red or grey high gloss paint. The instruments too resemble a bike's, with twin clocks shrouded by heavy cowls. Even the door armrests, shaped like flippers used by scuba divers, are supposed to reflect an active outlook. And at the back? Well, the rear door handles are disguised in an attempt to create a coupe-like look and once you use them, the door openings are a little narrow. Once inside though, you'll find that the dimensions Nissan has chosen, which see this car very slightly longer and wider than a conventional supermini, certainly create something that a small family could conceivably just about live with. Though the rear bench doesn't slide, it does offer reasonable standards of leg and shoulder-room, though tall teenagers might find their headroom a little restricted by the tapering roof. As for the boot, well that's probably the biggest story with this revised first generation model. Its tiny size was the biggest issue owners had with the original version of this car and the biggest reason potential buyers had to ignore this car. So Nissan's design team went to work, changing the shape of the trunk area to improve capacity by a massive 40% to 354-litres. 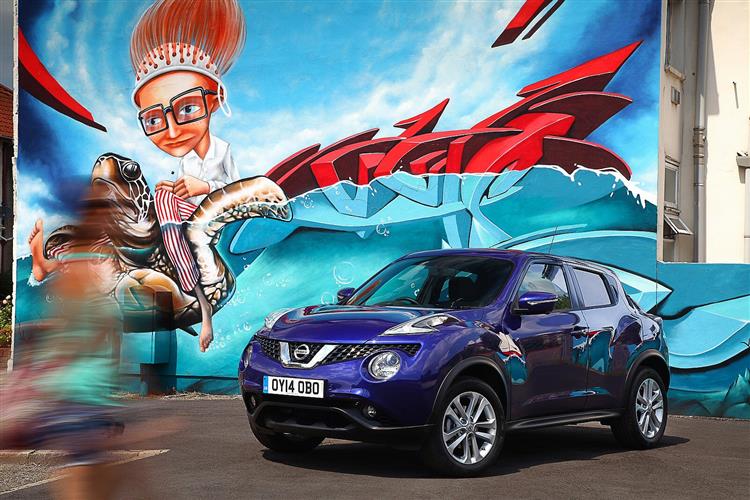