BUYING WITH GLE (some text hidden)

The Mercedes GLE, launched in 2015, is a large luxury SUV that had a more dynamic look and feel than its M-Class predecessor. Beautifully made and quietly capable, it kept its brand at the forefront of this segment. If you only need five seats from a car of this kind and want a prestigiously badged great all-rounder, it's a strong contender.

The old M-Class this GLE is based upon was for nearly two decades the world's most popular luxury 4x4, with over 1.5 million examples sold as it paved a path that other plush SUVs like BMW's X5 and Porsche's Cayenne would quickly follow. Rivals like these offered buyers a more dynamic interpretation of what a vehicle of this kind could be, but Mercedes fought back with the lighter, more agile third generation M-class design launched in 2012, the car that formed the basis for this GLE model. The change of name brought this car into line with other products in the Mercedes SUV range. In its era, it sat at the heart of the large section of this segment, just above the more compact Audi Q5 or BMW X3-sized Mercedes GLC model. And just below the Range Rover-sized Mercedes GLS. Only five seats were offered. Back in 2015, the brand bridled at accusations that this was merely a lightly facelifted version of that old MK3 model M-Class - and with some justification. After all, as well as smarter looks, this GLE got a completely fresh 9-speed auto gearbox and a clever 'DYNAMIC SELECT' handling control system. Under the bonnet, all the engines were significantly more efficient and there was the option of clever Plug-in petrol/electric hybrid technology for the first time, plus much improved safety provision and impressive levels of media connectivity. There was even an additional and complete separate sporty 'GLE Coupe' bodystyle. Here though, we're going to be concentrating on the standard GLE body shape which sold until early 2019, when it was replaced by a new generation model.

This GLE is certainly a more purposeful-looking thing than its M-Class predecessor - and needed to be. If you're not going to provide seven-seat practicality in a luxury SUV of this sort, then you need it to have dynamic looks and a menacing overtaking presence instead, something that in truth, previous M-Class models never really had. Fortunately though for Mercedes, this GLE looked a lot sharper.. First impressions are of a sportier, more dynamic car, both when first you see it from the front and when you take a seat behind the wheel. In place of the dull, conventional family-orientated layout of the old M-Class, you're sat more purposefully in front of a sportier three-spoke leather-stitched wheel. Through it, you glimpse a pair of more deeply-cowled dials separated by the colour multi-information display that Mercedes uses on most of its other models. No, you don't get the exquisite attention to detail you'd get in an S-Class, but specified correctly, it can feel very high end indeed. In the rear, you'll find a cabin with ample head and legroom that'll certainly feel luxurious enough for a couple of adults, even if they're six-footers. Out back, one of the advantages this car holds over its BMW X5 arch-rival from this era is that it offers you 40-litres more boot space, the 690-litre total proving to be class-leading from this period. 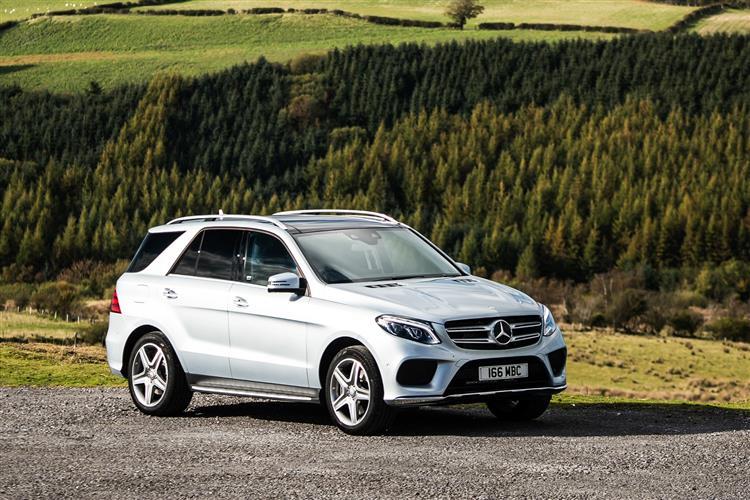