A LITTLE VXTRA (some text hidden)

Vauxhall's second generation Corsa VXR, announced in 2015, was certainly a step forward from its predecessor, with smarter looks, a more flexible engine, clever suspension and a more affordable asking price. There was also the option for buyers to spec it up as quite a serious track tool. So how does it stack up as a used buy?

The MK2 model Vauxhall Corsa VXR, we were told back in 2015, was the most focused VXR performance model that Vauxhall had ever made. Quite a boast, given that the company's VXR performance portfolio had to that date included frantically fast Astras, an Insignia capable of 170mph and VXR8 models with up to 585bhp. As every serious driver knows though, satisfying performance is about more than just sheer speed. So can that really be served up by this, the second generation Corsa VXR? Volker Strycek, former DTM Touring Car Champion and head of the Vauxhall VXR division, reckoned it could, he and his track-trained engineers having used the Corsa model line's move to fourth generation status as an excuse to make some pretty significant changes. True, the 1.6-litre turbo engine beneath the bonnet was basically no different from that of the previous Corsa VXR but in 2015, it still remained one of the most powerful units in the supermini hot hatch segment and in this form offered a wider torque spread, with an overboost facility for quicker bursts of power. Plus the ride height of this car was lower than its predecessor, the exhaust sounded sportier and the gear throw was shorter. None of this though, really justified that 'most focused VXR ever' tag. Original buyers of this car wanting that could create it though, with an extra cost 'Performance Pack' that claimed to be able to properly transform this little Corsa into a real track tearaway - the kind of totally uncompromised little pocket rocket that simply wassn't available from other brands in this segment in this era. It's certainly the sort of thing that the heritage of this model suggested potential owners would like. This model's predecessor, launched back in 2007, really only came alive when a track-style 'Nurburging' version was launched in 2011, that followed by an even harder-core 'Clubsport' variant launched shortly before this MK2 model made its debut in the Summer of 2015, selling until early 2018. Those limited run derivatives proved that Corsa VXR buyers tended to be owners minded to take their driving a bit more seriously. People more likely to try a trackday and tinker with the technicalities. So, will they like this car as a used buy? And does it have an appeal wide enough to also interest more mainstream customers browsing in the supermini hot hatch segment? Let's find out.

Vauxhall subscribes to the shock and awe school of styling when it comes to the Corsa VXR. There's certainly no chance of mistaking this hot hatch version for one of the less potent models in the range - which is exactly what its enthusiast-orientated audience will want. Get a model whose original owner added in the optional 'Carbon Pack' trim kit, the big 18-inch wheels and bright paintwork and you'll have yourself a real Max Power head turner. If that's your cup of tea, this Corsa delivers. Step over the branded VXR door sill covers and you enter an uncompromised cockpit highlighted by brilliant race-style Recaro sports seats, chairs with plenty of support for your thighs, sides and shoulders to keep you in place during hard cornering - the kind of thing you'd think you might get in a touring car racer. The instruments you view through the three-spoke multi-function wheel look good too, the dials featuring a carbon fibre effect finish and separated by what Vauxhall calls a 'driver control centre' screen that deals with trip computer functions and even provides a stopwatch so you can time your progress on trackdays. At the back, there's about the same amount of room for your head, elbows and legs as there would be in a rival Ford Fiesta ST and loads more than there would be in a comparable MINI Cooper S. And the boot? Well once you've got your luggage in, you'll find a class-competitive 285-litre cargo bay. 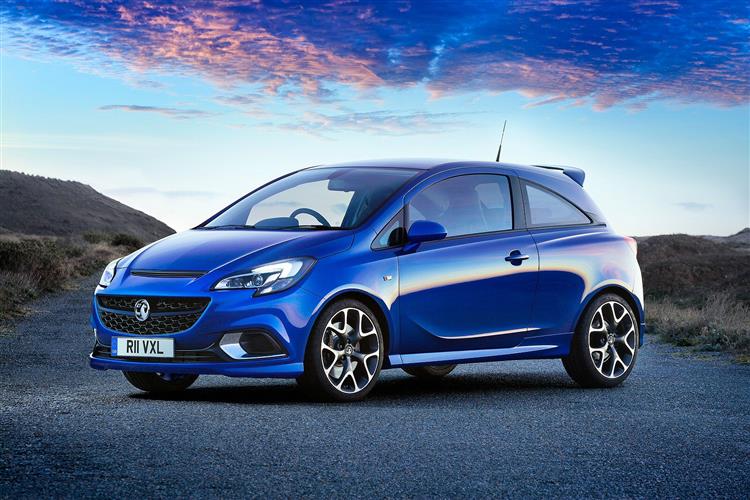