THE QUIET REVOLUTION (some text hidden)

When Lexus launched the third generation IS saloon in 2012, it had a simple mission. It needed to be a car that potential buyers would enjoy owning more than a Mercedes C Class, an Audi A4 or a BMW 3 series, the three leading choices in the compact executive saloon segment. That was a tough objective, so in trying to realise it, the Japanese premium brand tried to get away from merely copying the winning Teutonic formula in this sector, primarily through offering petrol/electric hybrid power rather than the kind of 2.0-litre diesel engine business buyers were used to. It proved to be a refreshing approach for people in search of something just that little bit different.

Here's an interesting car, the Lexus IS. For many potential buyers, its main appeal lies not in what it is but in what it isn't. Namely a BMW, an Audi or a Mercedes, these being the three Teutonic heavyweight brands who dominate the compact executive saloon sector in which this Japanese contender competes. As a result, our company carparks are overflowing with 3 Series, A4 and C Class models, with the cars in question nearly all powered by clattery diesel engines and mainly driven via the kind of over-firm sporty set-ups that the magazines insist buyers should have. If though, you're fed up with these predictable choices and want something that reinterprets what a car of this kind should be, then this, we'd suggest, is where you need to start your search. With the first generation version of this IS model, launched back in 1998, Lexus messed around with different bodyshapes. With the MK2 design of 2005, the brand dabbled with diesel power. When this third generation arrived in late-2012 though, you sensed that at last, Lexus was more comfortable in itself, content to concentrate on its strengths, no longer feeling the need to copy what others were doing. Sure enough, almost everything about this IS proved to be different from the norm in its chosen segment. The styling, the single saloon bodystyle, absence of manual transmission and, perhaps most notably, the fact that now, in contrast to the previous generation model, there was no diesel engine on offer. Instead, buyers were offered a unique four-door look, an auto gearbox and an overwhelming emphasis on petrol/electric hybrid power with its sensible running costs and limo-like silent start-up. Buyers who didn't like hybrid power were offered a conventional petrol engine alternative, first a 2.5-litre IS 250 V6 model, then, in 2016, a replacement four cylinder petrol turbo IS 200t derivative. Neither sold in any significant numbers. No, this car is primarily a hybrid product, that powertrain key to a unique approach we nearly didn't get. Back when work on this MK3 model IS design first started in 2008, the global recession was tempting Lexus back to the badge engineering of Toyota models, which would have made this a plushed-up Toyota Avensis. Thankfully, common sense prevailed and what we ended up with was much more than that - a car intended to change your mind: about hybrid power, German brand domination - and Lexus itself. The original version of this third generation IS sold until early 2016 when it was replaced by a facelifted version.

What You Getword count: 702

Lexus decisively shifted from bland to bold with this third generation IS. Doubtless there'll be a few who won't take to this MK3 model's more extreme styling but overall, this MK3 model shape won a good deal more admirers thanks to its more assertive persona. At the front, there's the signature Lexus spindle grille flanked by xenon headlamp clusters underlined by daytime running lights fashioned in the 'L' of the Lexus logo. It all delivers a highly distinctive visual signature that's even more dramatic if you've an F Sport model with a mesh front grille and a swoopier front spoiler. That front grille defines the dynamic shape of the body, the starting point for creases that widen across the powerfully domed bonnet before passing through the base of the front pillar and tightening as they flow towards the rear. The shape is certainly expressive, with its muscular front wings and flared wheelarches, and features a strong horizontal belt line that's supposed to create the impression of larger rear tyres and a lowered centre of gravity. We particularly like the styling of the rear light cluster. It seems to start in the rear wheel arch before framing the rear number plate. It even incorporates an aero-stabilising fin. Lovely. This MK3 model was a bigger car than its predecessor, 75mm longer and 10mm wider in fact, the extra size paying big dividends when it comes to rear seat space, traditionally a shortcoming not only for this Lexus but for most of its direct rivals. Get inside and you'll find that the extra space the bigger wheelbase generates has been well used. Whereas the MK2 model IS was pretty cramped in the back, this one offers best-in-class standards of kneeroom - there's 85mm more of it than on the previous car, aided by front seats that are thinner than those of that old model. Headroom's not as impressive though - and, as is the case with obvious rivals, you certainly won't want to be stuck in the middle at the back, legs astride the inevitably prominent transmission tunnel. Up front, first impressions are very positive indeed. For a start, the basics are right: all-round visibility's good, the mirrors are big and clear, the driving position is adjustable in just about every imaginable way and the seats, pedals and steering wheel all feel great. But it's more than that. Put bluntly, this cabin feels better built, with higher quality materials, than anything else in its class from this era - and by quite a margin too. Even the faux leather looks realistic and there's plenty of the proper stuff too. Highlights include the lovely analogue dashboard clock and the touch-sensitive electrostatic switches you use to adjust the air conditioning temperature. Oh and the way the electric windows slow as the gradually close with a lovely softened thud. As with bigger Lexus models, the dash is split into distinct display and operation zones, the upper display section dominated by a 7-inch LCD infotainment screen. If that includes satellite navigation and your car has the top-spec Lexus infotainment system, then operation can be marshalled by the eight-way moveable 'mouse' you'll find in the lower operation zone, with functionality that not everyone likes. It does, after all, take quite a subtle touch to guide the cursor where you want it to go. Once you've got the hang of it though, it works fine. Overall, we're not sure the control systems can quite edge those of a rival Audi A4 from this period, but it's a close run thing. The seats, with their lovely quilted finish, are also worth a mention as those drivers who like a sporty feel can get hunkered right down in the car, while those who prefer a more elevated view out can jack them up a fair way. And the boot? Well the batteries that must be housed beneath its floor in the hybrid IS 300h model rob you of 30-litres of space, but that still leaves a class-competitive 450-litres of room on offer. And, as long as you avoid entry-level trim, there's a 60/40 split-folding rear seat for those times when you want to avoid the home delivery charge after a trip to IKEA. 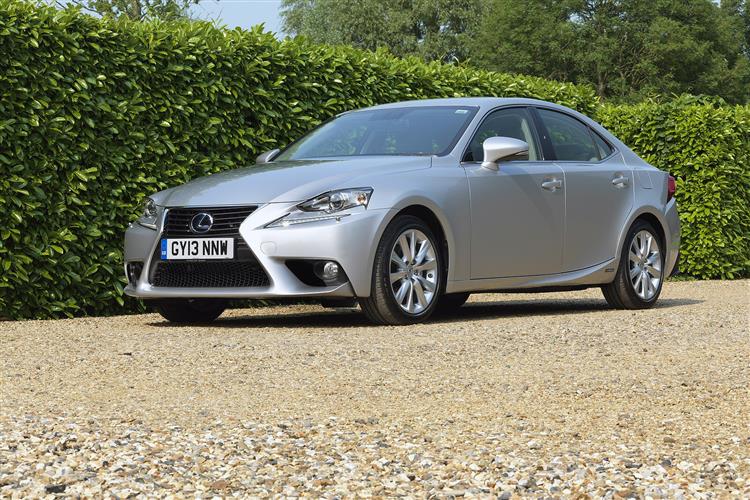