A COMMERCIAL PRO (some text hidden)

When it comes to vans, Toyota's speciality has always been the medium-sized market it targeted with its Hiace model from the Seventies to the Noughties - but never really cracked. Things are changing though, as the brand gets more serious with business buyers thanks to a technology-sharing deal with PSA Peugeot Citroen. The first fruits of that collaboration emerged in 2012 with this van, the Proace. On paper at least, it seems to have much to offer to buyers in the used market looking for a versatile medium range Transit-class van from the 2012 to 2016 period.

Toyota is a brand that loves a partnership. It commissioned Yamaha to develop many of its petrol engines, it joint-developed a sports car with Subaru, sold engines to Lotus and agreed fuel cell and electric vehicle technology with BMW. Perhaps then, it won't surprise you to learn that when the Japanese giant was looking to replace its Hiace range of vans at the end of the Noughties, it decided not to strike out alone. Instead, the company chose to further develop an existing partnership with PSA Peugeot Citroen that had already created the Aygo citycar. The plan second time around was to bring a very different kind of vehicle to market. This one - the Proace van. Those of you clued into the commercial sector won't need us to tell them that this is in fact a rebadged version of second generation Peugeot Expert, Citroen Dispatch and Fiat Scudo designs. If you know that, then you'll probably also know that these are some of the best medium range panel vans around from the 2013 to 2016 period. It's a vehicle that certainly had a wider customer reach than the Hiace it replaced. That model occupied an awkward market middle ground, not quite small enough to be recognised as a compact van - say a Ford Transit Connect - but not quite big enough to be seen as a decently sized medium range one - say a Ford Transit Custom. The MK1 model Proace, in contrast, was spacious enough to be perfectly pitched, not only at the bigger Ford but also at other tough segment players like Volkswagen Transporter and the Mercedes Vito, as well as new generation versions of Vauxhall's Vivaro and Renault's Trafic. The first generation Proace sold until the autumn of 2016, when it was replaced by an all-new second generation model.

What You Getword count: 768

There's more to the Proace than meets the eye. The neat and unassuming styling leads you to believe that it's not a hugely capacious thing, but there's versatility in the model configurations and the range covers a lot of bases. The windscreen is steeply raked, creating a wedge-shaped front end with huge headlamps. You'll find chunky rubbing strips protecting the flanks, while tail lights are mounted high up to help avoid potentially costly parking knocks. As for interior comforts, well the low floor means that the cab's easy to get in and though the handbrake lever's oddly situated between the driver's seat and the door, it doesn't get in the way. The gearstick might not be where you'd expect to find it either, repositioned from the floor to a protruding moulding in the centre of the dash. That makes space for the optional middle seat that most Proace models came fitted with. We'd want that for the versatility it gives you when it comes to giving mates an occasional lift - though their knees will be crammed up against the gear shifter. Kids being dropped off at school on the way to work will be fine though. Get used to all that, get yourself comfortable and you'll appreciate a firmly upholstered seat that's positioned to suit those who've to jump in and out of their vehicle all the time and though there's limited height adjustability, you do get a rake and reach-adjustable steering wheel. Those who've to spend their working lives in a cab like this will want to see some evidence of care and attention on the part of the designers and sure enough, this Proace provides it. The usual shallow bin you get in each door has a moulding designed for a soft drinks can or a small bottle of water, plus there are pull-out cupholders at either end of the dashboard. You also get indented mouldings on the lid of the lockable glovebox - though these will of course be useless on the move. Further practicality points are gained though with a deep, strangely-sized bin on the top of the dash on the passenger side, cubbies in each corner, a shelf beneath the steering column and a tray beneath the passenger seat. You'll want some details on loadbay practicality. Heaving weighty cargo aboard is made easier by a low rear loading sill height (between 562 and 604mm) and the rear door aperture of 1245mm in width and 1272mm in height should enable you to get most loads in quite easily. But just how big can they be? Let's start with weight. There was an entry-level 126bhp 2.0-litre model offered at the foot of the range with much the same restricted payload capacity as the Crew Van derivative (in both cases, it's only just over 1,000kgs), but across the rest of the line-up, 1,200kgs can be accommodated without a problem. When it comes to load volumes, the Crew Van version's cargo bay is necessarily restricted to 3.6m3 by the provision of second row seating but otherwise, the minimum is 5.0m3 if you go for the 'L1H1' short wheelbase standard roof version. That rises to 6.0m3 if you choose the 'L2H1' long wheelbase standard roof model, before culminating at 7.0m3 for those favouring the 'L2H2' long wheelbase high roof variant. That latter figure is only 1.0m3 less than an entry-level version of an LCV from the next 'large' class up like Peugeot's Boxer. Of course, you may not be measuring your potential loading requirements in cubic metres, in which case we'll tell you that there's a useful load length of 2254mm in the 'L1' short wheelbase model (2584mm in the 'L2' lwb version) and height that's measured at 1449mm in the standard roof 'H1' version and 1750mm if you've gone for a 'H2' high roof model. Whichever Proace you choose, the load area width is 1602mm, which narrows to 1245mm between the wheelboxes. For those occasions when it's easier to get things in at the side, there's a couple of sliding doors provided with apertures (924mm wide and 1293mm high) big enough to accept a euro pallet. To keep stuff moving from around on the move, eight tie-down points are provided, but if you forget to use them and things slide forward, a pronounced lip at the cab end of the load bed is helpful. It should keep your packages from scraping the half-height protective panels provided on the doors and above the wheelboxes and clanging against the load restraint frame that's fitted to models lacking the optional full width fixed bulkhead that substantially improves cab refinement. 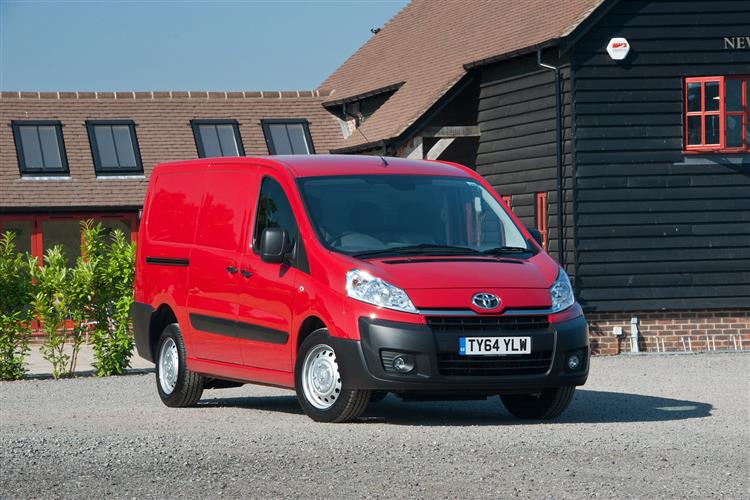