CARENS CARRIES ON (some text hidden)

With smart looks, a practical interior, great build quality and solid engineering, Kia's third generation Carens turned out to be a much improved 7-seat compact MPV. Though well appointed, it offers strong value and efficient running costs. In other words, you get pretty much everything families are looking for in this segment. Here, we're looking at the original version of this MK3 model that sold in the 2013 to 2016 period.

In many ways, the Kia brand has been built on MPV motoring and for years, its large Sedona model was its best seller here. By the turn of the century though, it was clear that people carrying segment growth lay in smaller designs, a market targeted with the original Carens model of 2000. This was the kind of car Kia used to make, cheap, practical and very dull. Signs that the brand could do better arrived with its 2006 replacement, but that was still an MPV you bought on sticker price, not necessarily because you really wanted one. Kia though has no room for such cars in its model line-up any more and accordingly, when this third generation Carens was launched in 2013, it was clear that it needed to offer a big step forward, with more desirable styling, impressive quality and hi-tech engineware. It needed to be practical too, given that by now, Kia was no longer offering that big Sedona MPV, hence the decision to only offer this post-2013 Carens with 7 seats. Do earlier versions of this MK3 model make sense for used car buyers? Let's find out.

What You Getword count: 971

Kia reckons that at launch, this was the most stylish car in its sector, a bold claim in a segment that even back in 2013 was boasting some distinctive looking rivals. The extent to which you'll agree will probably depend a little on the spec of the car you're looking at: plusher versions can certainly look quite desirable. All models, feature the brand's now familiar family front end with its sharply contoured lines, LED daytime running lamps and chrome-edged 'tiger-nose' front grille. Three-dimensional side surfaces continue the relatively dynamic look, with concave sections that start on the lower edge of the front doors before gently rising to the trailing edge of the rear doors. At the rear, where split horizontal rear combination lights make loading easy, you'll find a wide tailgate and window, with an integral rear spoiler and a hidden frame design for the glass for added practicality. Overall, we're talking a clean, effective and, in its own way, very clever piece of design, given its provision of extra cabin space, despite the fact that this MK3 Carens proved to be fully 20mm shorter, 15mm narrower and 45mm lower than the car it replaced. This was achieved thanks to a wheelbase that, thanks to a 50mm increase, is virtually as big as that of a much pricier Vauxhall Zafira Tourer - which most would see as a slightly larger car. Bear in mind, by the way, that Carens buyers only get that one wheelbase - that one body size: unlike Ford, Citroen and Renault, Kia doesn't see the need to offer separate five and seven-seat bodyshapes in this segment. It never did previously either, but older Carens models offered the choice of either five or seven seats. Here, you've a seven-seat-only design. Of course, it's one thing cramming three rows of seating into a car as relatively compact as this one (the 4.5m length isn't much greater than that of a Focus hatchback). Quite another for the rearmost pews to be actually properly usable. Are they here? Well, we don't want to get your hopes up too high on this score. No compact MPV in this class has yet delivered third row seating that's properly comfortable for adults on long journeys - and this one doesn't either. But, seating at the very back is at least here relatively easy to access thanks to an effective middle row tilting and sliding mechanism. Use it to get yourself into these chairs and you'll find standards of head and shoulder room pretty similar to those offered by obvious rivals: in other words, if you're an adult, there isn't much but a couple of kids will probably be just fine. Legroom of course will be the biggest third row restriction, but thanks to the way that the middle seating row slides backwards and forwards, with a little co-operation from those in front, it should be possible for most to get reasonably comfortable. And what of the middle row? Well, if you owned the previous version of this car, the first thing you'll notice is that it's much more flexible, made up of three separate reclining and sliding chairs rather than a single bench. That's made it much easier to properly accommodate three adults, something that would have been a bit of a squash before. If you're only transporting two people, then the middle seat can be folded forward to create a useful table. You also get a couple of useful recessed underfloor storage compartments to deal with the kids' paraphanelia or keep valuable away from prying eyes. Plus most models get neat fold-out seatback tables. Up-front, you view a clearly presented set of instruments through a smart, leather-trimmed three spoke steering wheel with intuitive controls and faultless functionality that leaves everything exactly where you'd expect to find it. An approach continuing across a smartly-styled dash split into an upper information area dominated by a prominent central screen and a lower control area where there are separate air conditioning controls for driver and passenger. True, despite the shiny surfaces and chrome accents, the overall cabin quality isn't quite as classy or as avant garde as some rivals can manage - but you wouldn't feel short-changed by it either. And it's practical too, with a spacious centre console box, a cooled glovebox and door pockets large enough to hold decently sized drinks bottles. Someone has thought very carefully about how this car will be used, attention to detail you see in things like the 'butterfly action' of the front wiper blades to ensure that they clear the edges of the screen on both sides. And luggage space? Well, as you would probably expect, with all three rows raised, there isn't much - just 103-litres - but then, that is 30% more than the previous version of this car could offer and you do get a neat underfloor compartment that can be used to stow away the removable load cover. With heavier items, it'll also help that the loading lip is 15mm closer to the ground, while at night, the portable LED luggage light that most variants include will come in useful. Plus there are the usual hooks and most models have a luggage net to keep stuff like your shopping in place. Of course, most of the time, most owners won't be using the third seating row and with the two rearmost chairs folded into the floor, there's 492-litres of space on offer below the windowline - 71-litres more than before. Push forward the second row and you get a usefully flat floor and up 1,650-litres of total fresh air. Not quite as much as some rivals can offer it's true, but probably enough for most needs, especially since the front passenger seat can be folded in half to accommodate long items like surfboards and bicycles. 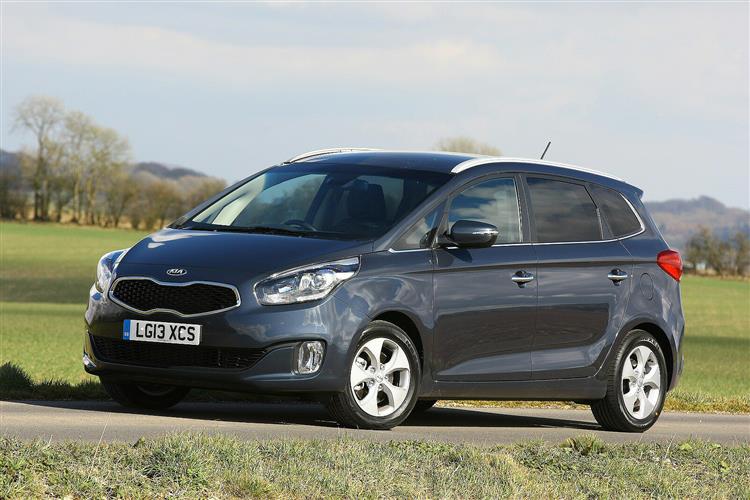