GETTING INTO CZECH (some text hidden)

A Skoda Octavia was once the least sophisticated of all the Volkswagen Group's family hatchback products. That wasn't the case by the time this MK3 model Octavia came along on 2013. Almost nothing was held back for this third generation version. It was still bigger and better value than most of its rivals, a Mondeo-sized medium range hatch for the price of a Focus-sized one. But the difference with this third generation design was that it was finally clever enough to change the way that cynics thought about Skoda. Let's Czech it out as a used buy.

You can trace the Skoda success story of the last few decades back to the original launch of one model: this one - the Octavia. Right from its very first appearance in 1996, this has been a car that's always super-sized its value proposition, offering more space than the class norm. For first and second generation versions, that class saw competition amongst Focus and Astra-class family hatches. This MK3 model though, took a step up in the world, virtually big enough to compete with Mondeos and Insignias in the larger medium range segment. An Octavia then, that was usefully larger than ever before - and cleverer too - as it had to be to distance itself from the simpler, smaller Skoda Rapid model that hit the market a few months before this car arrived in the Spring of 2013. The Rapid is the car to choose for Skoda motoring as it used to be, light on frills and cutting-edge technology but solid, reliable, value-laden and built to last. This Octavia, in contrast, was more of a signpost to the kind of direction the Czech brand wanted to go in the future: one sharing the very latest technology with more luxurious brands in the Volkswagen Group stable. There was a price tag to go with that of course, but it was one that still offered an affordable way into state-of-the-art thinking, most notably the hi-tech 'MQB' platform this car shares with SEAT's Leon, Volkswagen's 7th generation Golf and even the pricey Audi A3. Underpinnings that allow the kind of technology and roadgoing dynamics that back in 2013, buyers had simply never seen in a Skoda before. An Octavia then, that was guaranteed to surprise those familiar with the brand and others new to it. This car sold until 2017 when it was facelifted inside and out. It's the pre-facelift 2013 to 2016 hatch and estate models we concentrate on here.

What You Getword count: 762

It's a mark of the flexibility of the Volkswagen Group's MQB modular transverse platform that it can produce a couple of cars as different as the MK3 Skoda Octavia and a MK3 Audi A3. It was stretched to make this Skoda significantly bigger than its Audi counterpart (it's bigger than the MQB-based VW Golf and SEAT Leon models too) but that apart, beneath the panelwork, almost everything else about these two cars is actually the same. You can't tell an Audi buyer that of course, but Skoda customers will receive the news with smug satisfaction, released, as they are, from the burdens of badge equity. These people will probably quite like the fact that the look and feel of this car is very similar to its predecessor, despite Chief Designer Josef Kaban's attempt to create what Skoda called 'an engaging and elegant new look'. The similarities persist despite the difference in size: this car is 90mm longer and 45mm wider than its MK2 predecessor, making it all the more impressive that it also manages to be up to 102kgs lighter. That's been achieved through very careful attention to detail, plenty of which you begin to notice once you start to examine this car more closely. At the front, the 19-slat corporate grille is flanked by highly detailed headlamps with patterns inspired by traditional Czech cut glass. Moving further back, you follow the sharp so-called 'tornado line' that profiles so many modern Volkswagen Group products, there to stretch the car visually and emphasise what Skoda rather optimistically hopes will be seen as a 'coupe-like silhouette' around rear side windows shaped like jet aircraft tailfins (no, we couldn't see it either). The way that bold creaselines cleverly separate the surface areas is especially evident at the back where the familiar C-shaped rear lamps can feature hi-tech LED lighting. But it's when you lift the heavy bootlid that you get a feel for what this car is really all about. It's absolutely huge, the 590-litre load area you reach over a notably low lip 28mm longer and 125-litres bigger than with the previous generation model, the space on offer almost double what you'd get in a comparably-priced Ford Focus and over 50% more than you'd get in a Volkswagen Golf. Even larger medium range models can't match this: it's 10% bigger than a Ford Mondeo or Vauxhall Insignia from this period and over 20% bigger than a Mazda6. Push forward the split-folding rear bench to free up 1,580-litres and the Skoda's advantage is just as great, even if the space available isn't quite flat. But of course, if you're likely to be doing that on a regular basis, then you'd do better to opt for the estate variant, a car which offers 590-litres with all the seats in place or 1,740-litres with the back seat folded. Was all this achieved at the expense of rear seat occupants - as was the case with the first generation version of this car? No. Enter in through the wide door openings and you'll find that, thanks to a 108mm wheelbase increase, there's more headroom and elbow width than there was before - though still not quite enough to really comfortably take three adults on longer trips. But then, previous Octavias have always been accommodating. Traditionally less attractive has been the Spartan built-down-to-a-price feel offered up behind the wheel. This car does better here. You still wouldn't think you were in an Audi but everything's certainly much more Volkswagen-like in terms both of fit and finish, the feeling supposed to equate to that of 'wearing a well tailored suit', according to the design team. A few budget touches remain - the hard, cheap plastic used to trim the interior just below the windows on the rear doors for example. But overall, thanks to things like a soft touch slush-moulded dash and the addition of damped grab handles, the feeling of thirift and over-riding solid sensibility that characterises Skoda's only slightly smaller Rapid model isn't as evident here. The white backlit instrument panel was re-designed for this MK3 model but probably the biggest interior change lies in the way that stereo, navigation and trip computer functions are wrapped up into a clear and easy-to-use infotainment touchscreen. There are lots of clever cubbies too - with storage areas big enough to take a 1.5-litre bottle. We particularly like the smart 'phone holder, placed down by the (thankfully conventional) handbrake. We all have to cart our smartphones about with us: why can't every cabin house them as neatly as this one does? 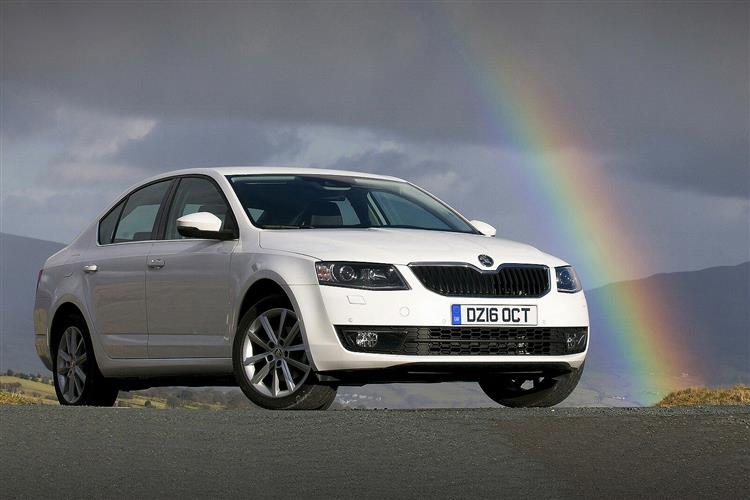