Toyota's Land Cruiser V8 is probably the toughest, most capableused luxury SUV you can buy, globally trusted in some of the world's most inhospitable climates. From the Australian Outback to the Argentinean Pampas and on through the streets of Europe, this is a vehicle universally admired for its all-round abilities: highly reliable, tough off-road, yet sufficiently comfortable and refined to go anywhere and be seen everywhere. In 2012, it was improved with even more off road ability and luxury kit and that's the version we look at here as a used buy. It's still not sophisticated and car-like but for most potential owners, that won't matter. They know that it'll probably out-last them. And that it'll always get them there.

Welcome to the car that began Toyota's world domination - the Land Cruiser. Well over five million of them have been made since we first saw the name applied to the bodywork of a cloned Jeep back in 1954 and it says everything that most of them are still going, pounding the Gobi desert, distributing UN aid and, yes, in the case of this 'J200'-series V8 model, satisfying a rather select group of luxury SUV owners. This car is a completely different proposition to the 'Light Duty Series' Land Cruiser that sells for nearly half its price to the Land Rover Discovery set, but for the super-rich who tend to choose it, both this and the boxy forgettable looks are a selling point. After all, if you really do have it, then you really don't have to flaunt it. The basic design of the 'J200'-series Land Cruiser V8 model we look at here was first seen in 2008, when it replaced previous 'J80' and 'J100'-series models that used first 'VX', then 'Amazon' badges to differentiate themselves from humbler, six cylinder 'Light Duty Series' Land Cruiser variants. Owners of those top versions will recognise this one immediately, exactly as Toyota intends that they should. Over 1,500 engineers were given over five years - twice Toyota's norm - to first develop this car for its original 2008 launch. Before then being further tasked to improve it for the 2012 model year with a cleaner engine, a smarter look, extra equipment and a whole range of off road handling and driver assistance systems. The result - the improved model we're evaluating here - is quite a vehicle. Unfortunately, sales didn't reflect its capability and Toyota quietly deleted it from the range late in 2015.

What You Getword count: 601

Toyota tried to smarten the look of this Land Cruiser V8 as part of the 2012 model year package of improvements. That brought buyers a restyled front grille with a smarter set of headlamps and LED daytime running lights. Moving around, owners of the original post-2008 version of this model might note the thicker side protection mouldings with their chrome highlights and the revised door mirrors which incorporate the same LED technology for their integrated turn indicators as you'll find in the smarter combination light clusters at the rear. Ultimately though, this remains a boxy, old-school large SUV rather than something to suit the trendy Range Rover Sport-style set - and there's something rather refreshing about that. Passers-by will note this Land Cruiser's enormous size (who could not?) without mentally classifying this you in the posing, hunting, fishing horsey set. No aluminium panels, fancy xenon headlamps or automatic handbrakes, all of which would be impossible to service in Third World countries. No, it's clear you've bought this vehicle for a sensible purpose rather than for its High Street cred. Transporting 7 people for example. Amongst this model's most direct rivals from its era, only Mercedes' pricier GL-Class can do that and it isn't anything like as capable off-road. We're actually always a bit shocked when we get in huge super-luxury 4x4s to find just how little of all that bulk has translated into cabin space - but not here. The second row seats can accommodate three adults, even if they're basketball players, thanks to the ample headroom and the way you can slide the bench backwards and forwards. The third row of seating however, though adequate for adults when you reach it, can be a bit difficult to get to and folds slightly awkwardly against the sides of the boot area when not in use. Other rivals more neatly tuck their extra chairs into the boot floor, but the flip side of that is then there's only room for a space saver spare tyre rather than the proper full-sized 20-inch spare you get here. You'll thank Toyota for that if a puncture ever grounds you in the Serengeti. Bootspace is accessed via a Range Rover-style split-rear tailgate that offers a comfortable seat for outdoor activity. Beyond it, the cargo area varies between 259 and 1267-litres in size, depending upon the seating configuration you choose. And there are plenty of configurations thanks to the way that the second row bench splits 40:20:40. At the wheel, your seating position is higher and even more commanding than that of a Range Rover, with a dashboard and build quality standard befitting the Lexus badgework that this car carries in some countries. Of course, not everything's perfect - the centre console wood looks a little plasticky for example - but it all feels suitably high end and finding a comfortable driving position is the work of a few seconds of electric button tweaking. It certainly feels classier here than it used to be thanks to the copious use of piano-black paint, silver-finish trim and chrome-plated detailing. Ahead of you lie a set of backlit blue-illuminated Optitron dials and a large TFT multi-information display. And though minor switchgear is a bit scattered, a least most of the buttons are large and easy to use, even when wearing gloves. We also like the fact that you get a proper conventional handbrake. Best of all, it's solid and built to last: you can jump in with muddy boots and somehow you don't feel guilty. When it comes to SUVs, there's a lot to be said for the real thing. 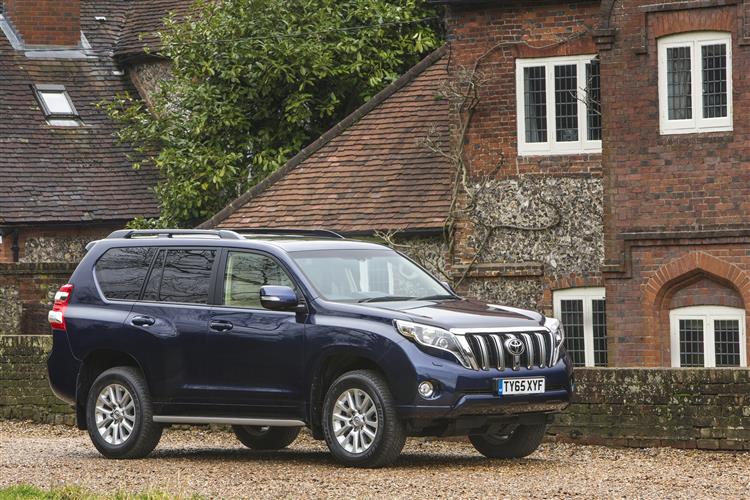