CALLING IN A PRO (some text hidden)

Whether you see it as a smart coupe or a sleekly-styled three-door hatch, Kia's pro_cee'd offers a sensible spin on sporty motoring and is a smarter proposition in second generation guise. It's also well built, aggressively priced and comes with almost bullet-proof reliability. Sensible then, but with a little sexiness thrown in.

Flair and desirability weren't words really associated with Kia in the early years of this century. But that was before the brand brought us a stream of new models delivering just that - the funky Soul supermini as well as more dynamic versions of the Sportage Crossover, the cute Picanto citycar and before those, this car, the pro_cee'd. Today, the temptation is to see it as little more than a three-door version of the Focus-class cee'd family hatchback, but back in 2008, this was a shocking departure for Kia dealers used to the dull family fare offered across the rest of the South Korean maker's range. Styled and positioned as a stand-alone affordable sports coupe, it was a key component in Kia's progression to their current place amongst the mass market's most forward-thinking brands. In 2012, the launch of the second generation cee'd range gave Kia an opportunity to refresh the pro_cee'd proposition and it's the early version of this MK2 model that we're going to look at here. This original design sold until the Autumn of 2015 when it was replaced by lightly updated facelifted model.

Longer, lower and lighter than its five-door stablemate, this MK2 model proc_ee'd might not now attract quite as many admiring glances as it did at launch back in 2008 but it's still a good looking piece of design, built in Slovenia and designed by Europeans for Europeans. The front end of this second generation version featured Kia's 'tiger nose' grille to lend it a bit more attitude, something clearly evident in the sharply raised beltline and the sharp crease leading into the rear arches. These features help disguise the fact that this design rides on the same chassis as the cee'd and features the same windscreen angle. Other than that though, only the bonnet and front wings are shared. At the rear, the raked-back window emphasises a low coupe-like stance further underlined by a subtly sporty rear spoiler. Inside, the only really sporty touch is the four-spoke wheel. Depending on the model you choose, there's faux aluminium or piano black trim to jazz things up a little, but none of it is quite enough to differentiate the cabin much from that of a five-door cee'd. Still, the cabin itself is a pretty nice place to be, the three-dial instrument cluster sitting below a single cowl, while the centre stack is slightly angled towards the driver. The doors shut with a quality 'thunk' and it's easy for almost anyone to find a decent driving position, thanks to a height-adjustable driver's seat and a steering wheel you can alter for both reach and rake. Getting into the rear is made easier by extra-wide-opening doors and memory position seats and once there, thanks to a wheelbase length identical to that of the five-door cee'd, space for a couple of adults is reasonable on all but the longest journeys, providing occupants don't mind the slightly claustrophobic feel created by the high windowline. Out back, there's the same 380-litre boot you'd get on the five-door model and the 1225-litre total you get when pushing forward the 60/40 split-folding rear seats is only 93-litres less. 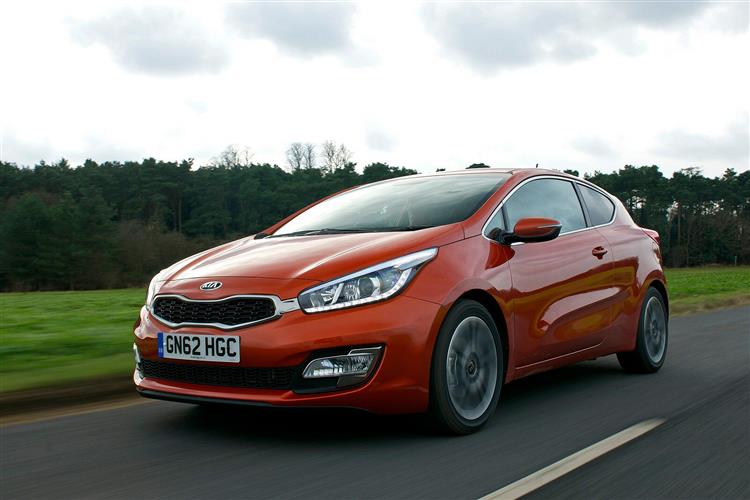