Kia hugely improved third generation Sportage managed to steal sales from both Qashqai-like Crossovers and RAV4-like compact SUVs. With design flair matched to engineering sophistication, it proved to be a very complete - and very desirable - family car. But how is it as a used buy?

Crossovers - Nissan Qashqai-like family hatches with car-like dynamics and running costs that belie their SUV-like looks and optional 4WD - are big business in Britain these days. From almost nowhere a few years ago, this class of car now accounts for nearly 10% of the UK market. Such a lucrative sector is it that today, we have all kinds of models claiming to be 'Crossovers'. Some, like the Qashqai of course and Peugeot's 3008, clearly are more family hatch than 4x4. Others, like Ford's Kuga and Skoda's Yeti, look far more like the kind of model that until a few years ago, we would have classified as a soft-roading compact SUV, slightly more car-like alternatives to a Toyota RAV4 or Honda CR-V but still very much 4x4s. Here's another to add to that particular list, Kia's third generation Sportage. It's billed as a 'Crossover' but looks - and feels - more like a less politically correct small SUV. But whatever you call it, here's a car that represented a big step forward for the Korean brand. Launched in 2010, this Kia had almost nothing in common with its dumpy, unappealing predecessor - and was all the better for it. SUV-like it might be, but it delivers its virtues in a strikingly designed package that proved to be much easier for many ordinary buyers to live with than any RAV4, CR-V or Freelander. Most of those people were quite happy with the 2WD models that made up the majority of the range, but as all-weather, all-wheel drive family transport, the 4x4 versions also have plenty to offer. Ultimately, what this car claims to represent is a design that blends the best features of Qashqai-like Crossovers with RAV4-like soft-roading small SUVs. It sold until early 2015 when it was replaced by an all-new fourth generation version.

We're finding it hard to think of another car that in just a single generation could be said to have progressed aesthetically quite as far as this one did from MK2 to MK3 model status. In 2010 with this third generation Sportage's launch, dull functionality was replaced by a longer, lower, wider and lighter rakish package that was - and still is - arguably better looking than any other car in this class, with its trademark Kia 'tiger nose' grille, sculpted flanks, raked back C-pillar and sharply angled rear window. It's a shape that was designed in Germany by ex-Audi stylist Peter Schreyer, the creator of the original Audi TT, this being the first Kia he was able to pen entirely from scratch. The interior too clearly had some attention spent on it above and beyond what you'd normally expect at this price point. As you'll find if you look hard enough, the designers clearly had some cost restraints to work to but on first acquaintance with the cabin, you really don't notice the fact, the over-riding impression instead being of crisp, clean quality, with everything seemingly very nicely screwed together by the Czech factory. The cowled instrument cluster with its big centrally-mounted speedometer is clear and effective and there's tonnes of adjustment for both the driver's seat and the steering wheel. Storage space includes a 6-litre centre console bin, large door pockets and a glovebox that's air-conditioned on some models. In the back of this five-seater-only design, though rear occupants can't slide, recline or remove their seats, they do at least have reasonable standards of head and legroom for a car of this class - or at least they will have if there are only two of them. It certainly feels an airy place to sit, even if your Sportage doesn't feature the panoramic glass roof that's standard on plusher variants. That's thanks to the clever reverse-angle for the C-pillar that offers a clearer view out. Out back, the 564-litre boot is large and well shaped and is impressively big for a vehicle only 9mm shorter than a Vauxhall Astra. Push forward the 60:40 split-folding rear seats to extend the capacity available and although you'll find that they don't fold completely flat, the 1353-litre total capacity will be welcome. 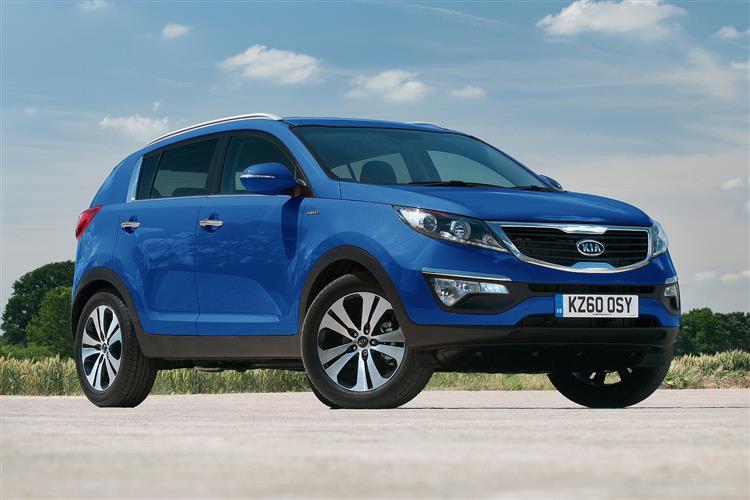