KOREA CAN DO (some text hidden)

In its original second generation form, Kia's cee'd no longer only looked to undercut Focus-class family hatchbacks: it wanted to tackle them on equal terms at equal prices. That meant it had to be very good indeed. Still, sharper looks, great quality and higher technology promised much. How does this model stack up as a used buy?

The rise and rise of the Korean motor industry has been one of the enduring industrial stories of the last decade, right up there with Google, Apple and Facebook and every bit as impressive. From an embarrassing budget brand base, marques like Kia have in recent years been embarrassing mainstream makers with style and high technology at sensible prices. It was an evolution that took less than ten years and one that all began with one car - the cee'd family hatchback, launched in 2007, but better established in the much smarter and more sophisticated second generation guise we're going to look at here. Automotive historians will look back at the original cee'd as a landmark car, the first to take on the European and Japanese market leaders on their own terms, especially in the volume Focus and Golf-dominated Family Hatchback sector. Built in the heart of Europe, it was targeted at the heart of the European motor industry, hence the unusual 'cee'd' name, a combination of the French abbreviation for European Community (CE) and this car's project title (ED). It shamed the established players by matching their quality while massively undercutting their prices and offering an astonishingly long 7-year warranty. And the result was a sensation, with nearly half a million European sales. Creating the second generation version though, was much harder. After all, converting customers into a new brand is always possible if the product is right and its prices low. But selling this cee'd for the same kind of money people would pay for a Focus or a Golf? At this MK2 model's original launch in 2012, we wondered if that might be a step too far, even for a brand as ambitious as this one. To pull it off, this second generation model needed to be nothing less than a showcase for everything the Korean company knew about design, quality, engineering and technology. Fortunately, it was. Kia offered buyers a choice of five-door hatch, SW estate and three-door 'pro_cee'd bodystyles. The original MK2 model we look at here sold until the Autumn of 2015, when it was replaced by a significantly revised facelifted version.

What You Getword count: 487

You might have heard people complaining that almost all cars in this class look pretty much the same. That's because there's only so much you can do with a total length that tends to be just under four and a half metres, into which you've got to slot five people, their gear, an engine and transmission - and then ensure it doesn't look like an MPV. In nature, this is known as 'convergent evolution'; where species evolve separately but end up looking alike. That's not to say that Kia has produced a bland car. Quite the opposite. In second generation form, the cee'd has a more contemporary stance that's both longer and lower than its predecessor, with the rising beltline giving the five-door hatchback a more aggressive, dynamic wedge shape. All very nice, but a more dynamic shape is usually a less practical one if, as in this case, it's based on essentially the same platform with the same wheelbase as the previous generation design. So how can Kia claim this car to be the most practical option from its era in the family hatchback segment? We always think the acid test here is found on the back seat. That lower roof height has been more than compensated for with a lower ride height, so even tall folk are better catered for, with 12mm more roof space than before. And the 50mm of extra body length that this car enjoys over its MK1 model predecessor has translated into 21mm of extra space for their legs too, so a six foot tall passenger can sit behind someone in front of them of a similar size. True, the narrower cabin puts paid to any idea of being able to comfortably transport three adults here for any distance but we're struggling to think of any car in this class that can do that anyway. Three kids will be quite comfortable. The extra body length also provides for a boot that's 40-litres bigger than the MK1 cee'd, offering a 380-litre capacity that's 20% bigger than that of a comparable Ford Focus from this era. That advantage is maintained when you push forward the split-folding rear bench to free up a useful 1,318-litres of total fresh air. And at the wheel? Well, the fascia layout is neat, though there are rather a lot of buttons. What's important though is that this is a classy place to be, with improvements in quality that are actual as well as perceived. Soft-touch surfaces, high-quality materials with chromed highlights, damped sun visors and lidded storage areas, subtle red ambient lighting, tactile door grab handles and precise panel gaps all combine to give the interior of this cee'd a solid, mature, almost premium feel. Walk around the car and you'll find tight shutlines wouldn't look out of place on a Lexus. This is clearly a design that's had a great deal of money spent on its execution. 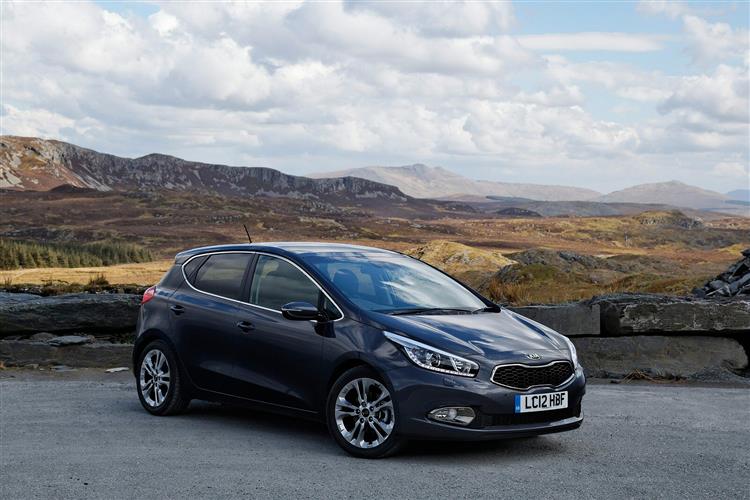