The second generation Kia Sorento is a tale of two halves. It first appeared in 2010 but the model we look at here is the facelifted and heavily revised version that was on sale from the tail end of 2012 through to its replacement in 2015. This model's remit didn't really change with the update. This was still a big SUV that got plusher and more expensive with every subsequent renewal, but still not at the same pace as the rest of the SUV market. Don't believe it? Think of it in these terms. Wind the clock back a decade and you could buy nearly three top-spec Sorentos for the price of a top-spec Range Rover. These days, you'd get four Sorentos for the price of the ritziest Range Rover. So the Sorento is better value than ever? That could be one appraisal. The best value still comes with used cars though, as you'll see here.

The 2012 update to the Sorento gave it an all-new chassis, so although it looked like a mere midlife revision, there was plenty more to it than that. The reason why Kia saw fit to so fundamentally update this design such a short time on sale is actually quite simple. The company shares all its technology with sister-brand Hyundai whose own family-sized SUV, the Santa Fe, was re-launched in third generation form in mid-2012. Economies of scale being what they are, it made sense for that model's more up to date engineering to be transferred into this Sorento. So much for product semantics. What about the car itself? Well, like the Santa Fe, it's one of the few affordable family SUVs you can buy that offer seven seats and so represents a more adventurous option for those who don't want to get stuck with a people carrier. What it isn't is the kind of serious off roader the original post-2003 first generation model tried to be with its rugged, separate chassis and low range gearbox. Instead, the original second generation Sorento was sent to finishing school, gaining a sleeker, more car-like Californian-styled monocoque body, super smooth high range-only transmissions and fancy multi-link rear suspension more suited to Surbiton than Snowdon. All launch models were seven seaters, powered by the same 194bhp 2.2-litre turbodiesel. Trims ran KX1, KX2, KX2 Sat Nav, and KX3. All but the KX3 were offered with a choice of manual or automatic gearboxes, the KX3 getting no availability of a clutch pedal and manual shift. At the start of 2014, Kia added a top-level KX-4 auto, with 19-inch alloy wheels, Parallel Park Assist, driver's memory seat, two rear sun blinds and a silver front grille as standard. Otherwise the range continued largely unchanged until the successor model was announced in early 2015.

What You Getword count: 427

This car is a genuine seven-seater but the back seats are still best reserved for kids who'll be quite comfortable there, particularly given that this car's redesigned platform has freed up an extra 9mm on legroom. That's a marginal improvement over the original version of this second generation model but those in the middle row really will feel the benefit of this improved version's extra space, thanks to an extra 30mm of legroom. Once in place, there's comfortable room for two adults and, on short to medium length journeys, reasonably room for three. Unfortunately, these seats don't slide to enable you to trade legroom with those behind you but they do recline for greater comfort on longer journeys. And at the wheel? Well though the emphasis remains on sturdy practicality, Kia has tried to offer up a more premium feel here, with a sweeping dashboard design, greater use of soft-touch materials, chrome highlights and a redesigned front centre console that on most models houses this 4.2-inch LCD colour touchscreen. As before, the driving position's commanding and with a height-adjustable seat and a reach and rake-adjustable steering wheel, it's easy to get comfortable. Ahead of you sit white backlit chrome-ringed instruments presented in Kia's trademark overlapping so-called 'three cylinder' layout. And practicality? Well there's a large centre console box, twin cup holders with a sliding cover, a large glovebox and four decently-sized door pockets. Out back, a lower sill and a high-lifting tailgate make it easier to load and unload - though inevitably, you won't have space for very much if all three seating rows are in place, a scenario that'll leave you with just 116-litres to play with. Fold the two rearmost chairs into the floor though and the figure rises to 515-litres. And, if you go further and drop the 60/40 split-folding second row backrest, there'll be 1,530-litres on offer. Safety-wise, this car was awarded a 5-star rating in NCAP tests and you can see why. As well as twin front, side and curtain airbags, anti-whiplash head restraints, a pedestrian-friendly active bonnet and isofix childseat fastenings, expect to find ESC Electronic Stability Control and VSM Vehicle Stability Management, the latter feature helping if, for example, you're in a situation where one side of the car has more grip than the other, say when you're driving near a grass verge. Plus the anti-lock brakes have a Brake Assist function to help in emergency stops that'll be advertised to following motorists by an Emergency Stop Signalling function that flashes the rear lights when you slam on the anchors. 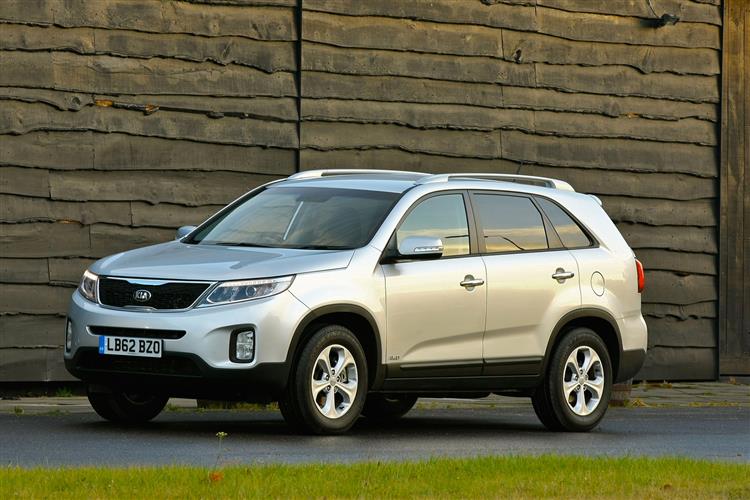