PASSING THE BATON (some text hidden)

For all the efforts of van makers to create ever-larger medium-sized LCVs, for many businesses, there's no substitute for something at the larger end of the spectrum. In which case, there's a choice of just four basic designs. Ford's Transit of course. Or the VW Crafter/Mercedes Sprinter package. Then there's the Renault Master/Vauxhall Movano collaboration. And finally, the design we look at here that, as well as Peugeot and Fiat models, has brought us this van, Citroen's Relay. Here's what to look out for when buying used.

Citroen doesn't have quite as much success in this sector as it does with selling more compact vans. So when this generation Relay was first launched in 2007, considerable effort went into making sure that it could match or beat its fiercest rivals in every respect. Even features like satellite navigation were included as standard. When it was launched, the Relay was offered with a choice of four body lengths, three roof heights and a spread of 110PS, 130PS and 150PS 2.2-litre turbodiesel engines and a 3.0-litre turbodiesel with 180PS. All of these engines meet Euro 5 emissions standards and are among the cleanest in their class. By the time it was due to be updated in 2014, the Relay was still offered with 2.2 or 3.0-litre diesels, but power had actually gone down on both engine sizes in order to hit emissions targets. This clearly wasn't a sustainable way of doing business and the 2014 replacement did a better job with its upgraded 2.2-litre diesel unit.

What You Getword count: 340

Pricing is much the same as you would for obvious rivals like Ford's Transit or Peugeot's Boxer but a little less than you'd be looking at for say, a Volkswagen Transporter. There's obviously a wide range of body sizes available - four lengths, three wheelbases and three roof heights, if you're counting - and these allow a range of load volumes that extend from 8 m3 up to a truly sizeable 17 m3. The Relay can manage some seriously hefty cargos as well, with gross vehicle weights extending up to 4 tonnes. This one grosses at 3 tonnes, has a 3,000mm wheelbase and could handle a gross payload of 1155kg. In addition to the various loadbay options, there are window van models (minibuses to you and I), single or double cab options and combi minibuses as well as the usual factory-built conversions that create chassis cab, crewcab, tipper, dropside and Luton derivatives. A major selling point is that all Relay models feature Trafficmaster satellite navigation as standard that not only gets you there but guides you round jams whilst it's doing it, plus there's Trackstar that will track your van if it's stolen to help recover it. All models also feature an overspeed warning to help drivers stay within the limit, plus there's an optional speed limiter that makes breaking it impossible. Automatic headlamps and wipers are standard, as are these big twin-lensed electrically operated and heated door mirrors. Other common Relay items include a multi-function trip computer, remote central locking with deadlocks that allows you to lock and unlock the cab and load area separately and activates once the vehicle is moving, a CD player with steering wheel-mounted controls, electric windows and 12v power sockets in both the cab and the load bay. More generous previous owners might well have loaded on extra cost items like a reversing camera, climate control and Bluetooth 'phone connectivity. Safetywise, you only get a driver's airbag in the basic tally, but you can specify passenger, side and curtain 'bags from the options list. 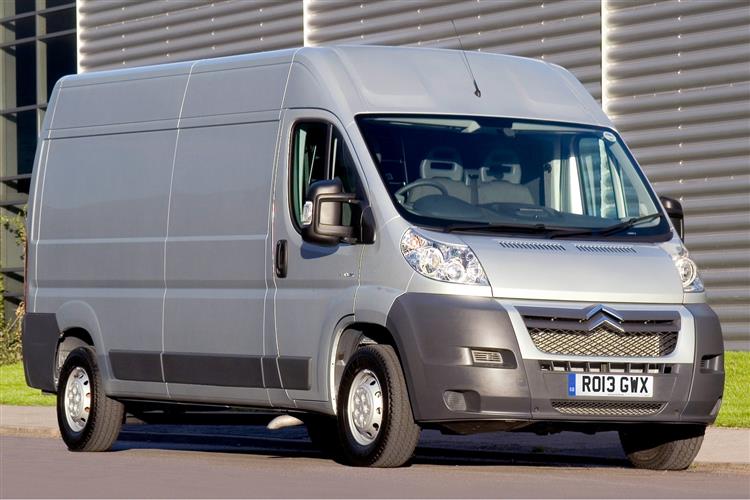