1 FOR THE ROAD (some text hidden)

Just as some will love Marmite and some will hate it, there won't be too many fence-sitters when it comes to BMW's 1 Series. While some will love its bold styling and distilled essence of 3 Series, others will see it as an overpriced clown shoe aimed solely at badge snobs and wannabes. It's easy to be cynical about the 1 Series until you drive it. Then you start devising ways to get your hands on one at the least possible expense. Here's how to bag a decent example.

It took the success of Audi's A3 to convince BMW that a business case could be made for a car to slot in below the 3 Series. The Munich company had never fully committed to this market sector before, their 3 Series Compact being a rather half-baked answer to the altogether more elegant Audi. The 1 Series marked a more concerted effort on BMW's part to snag a share of the action. With the first cars arriving in dealers in June 2004, the 1 Series proved instantly popular. 116i and 120i petrol models and 118d and 120d diesel versions were the first to be imported and this range was fleshed out with the 118i petrol model and, in 2005, the seriously rapid 130i. Sales have outstripped BMW's initial expectations, the controversial styling proving acceptable to a surprising number of customers. Perhaps we've just got a little more accustomed to it. A facelift of the range in the spring of 2007 tweaked the styling and heralded the arrival of the three-door 1-Series. Perhaps more importantly, it also brought massive improvements to the already excellent engine range. Economy and performance were boosted across the line-up while emissions came down making the 1 even more desirable to fleet buyers. The 116d model arrived at the start of 2009.

Although rear-wheel drive is great for driving dynamics, it doesn't always pay dividends in terms of packaging. In fact, there's less room in the back of the 1 Series than you'll find in a supermini like a Honda Jazz. With a six-footer behind the wheel, legroom is shockingly bad and the transmission tunnel means that you won't ever want to travel piggy in the middle on the rear bench. That's not what the 1 Series is all about. If you want a practical car, go and buy a mini-MPV. If you want the latest urban bauble that will turn heads and get tongues wagging, the 1 Series will be more your thing. At a stroke it manages to make the Audi A3 in particular look ridiculously staid. Of course, that styling isn't going to rest easy on every eye. For what it's worth, we think it's ugly but interesting, the scalloped surfaces and bold slashes pure Bangle-era BMW. The bowing sills and stumpy tail aren't beautiful in any conventional sense but the 1 Series is a car that keeps you looking, trying to see what the designers were trying to pull off. If it was to merely make a very controversial shape, they've certainly succeeded. You'll forgive it the moment you sit inside. The rear wheel drive layout has done more than affect the way the car handles. With no requirement to set the front wheels back to accommodate a pair of rear facing driveshafts, the 1 Series has a pleasantly roomy footwell with no offset to one side. The engine is instead mounted largely behind the front axle which gives rise to the long bonnet. The car's bulkhead is therefore set well back and, consequently, so are the windscreen pillars. This gives the 1 Series great all-round visibility without the mini-MPV feel of many small hatches. The way the windscreen pillars impinge on driver visibility in most rivals borders on the unacceptable but the 1 Series is again a welcome breath of fresh air in this regard. 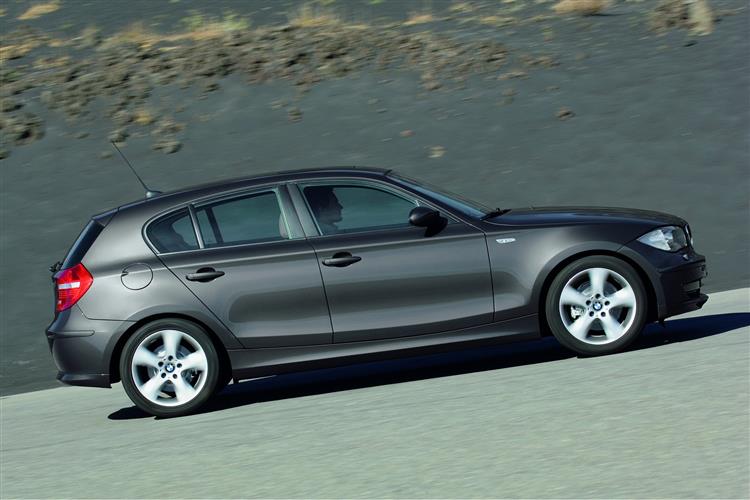