With the X1, BMW opened a third front in its SUV offensive. The compact X1 didn't get off to the easiest start in life, but that was something it had in common with the X3 and that model came good. But is buying an early used X1 a sound piece of business of are we merely being seduced by the badge? A dig behind the hysterical headlines finds a solid used buy.

The BMW X1 was almost expected to bomb. It's odd, given that much of its underpinnings are shared with the brilliant 3 Series, but given the way BMW had bungled the launch of the X3, no great things were anticipated of the X1. Few were enamoured of the way it looked and the specification lists didn't really offer too much in a crowded marketplace where customers had grown accustomed to good value. In other words, BMW underestimated the opposition. Taken in isolation, those original X1s weren't bad cars at all. Customers got the choice of rear-wheel drive or all-wheel drive models, with 143, 177 or 204bhp strengths of 2.0-litre diesel engine. Given that the entry-level car cost £22,660 before any options went into it and the cheapest all-wheel drive car was over £25,500, it needed to knock its opposition out of the park to succeed. It couldn't and well, it didn't. Sales were disappointing and the addition of an eco EfficientDynamics model into the range in 2011 did little to turn things around. BMW has proven itself to be a company that can and does react to customer demands and summer 2012 saw a wide-ranging suite of revisions to the X1. The car was restyled inside and out to offer it more presence and a better impression of quality, efficiency was further improved and a grunty 218bhp xDrive25d range topper was also introduced to help sway the notion that the X1 was a bit too fey to be a proper BMW.

I'm sure I'm not being hugely controversial when I say that the X1 isn't exactly the prettiest car BMW has ever built. In recent years there have been a lot of BMW models that have challenged the eye and almost all of them have become more accepted as time has passed, the public at large cottoning onto what the designers were driving at. Despite its underpinnings originating from the 3 Series, the X1 is a diminutive proposition that's noticeably smaller than mainstream compact SUVs like Land Rover's Freelander. Its long bonnet, wide stance and small glass area help create the sporty look that BMW is aiming for but there's nothing truly exciting about the X1's appearance. This is the manufacturer sticking to a tried and tested formula. It's a similar story inside the cabin with another of the marque's classy interior designs in evidence but little to excite those who've ventured into a BMW before. It's immediately clear that the X1 is not the car for buyers who get their tyres dirty on a regular basis. The xDrive20d model most choose has no additional modifications to improve its ability off-road and with modest ground clearance, the X1 will soon start dragging its belly on anything more testing than a potholed green lane. There are five seats but the rear bench hasn't got the most generous legroom. The luggage bay can be extended up to a useful 1,350 litres with the seats folded, which is simply achieved. 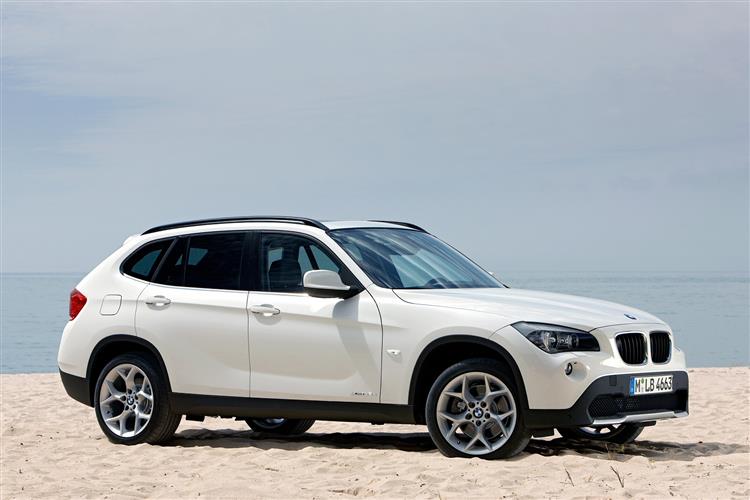