There's a special aura that surrounds the BMW M3, one that's replicated by precious few other cars. It's composed of ethereal stuff like the knowledge of the other great models that have carried the badge, the passion of the engineers who created them and the embarrassment in the supercars they've out-classed on race circuits around the globe. In fairness, and certainly by the time this V8-engined E90 series model arrived in 2007, the M3 probably was a supercar. It's just that this is a supercar with real everyday practicality and running costs that make used models accessible to the masses. With the realisation that you could quite conceivably own one, the M3 aura grows.

The E30, E36 and E46 generations of BMW's 3 Series executive car all spawned M3 versions and from the moment the E90 generation car arrived in 2005, speculation was rife as to the details of the inevitable M3. The size of the 3 Series had increased steadily through the generations and so had the power deemed necessary to give the M3 versions a suitably devastating punch. Kicking off with 200bhp in the weediest iteration of the E30 M3 and reaching 360bhp in the ultimate CSL version of the E46 model, M3 outputs had risen fast facilitated by the switch from four to six-cylinder engines for the E36 generation. The thinking was that for the E90 version to continue the M3's upward horsepower trajectory, it was going to need a V8. When the E92 M3 Coupe made its debut in 2007, the hotly anticipated V8 engine was installed and pumping out 420bhp. That car was followed early in 2008 by a saloon version (E90) and there was a convertible (E93) hot on its heels, one with a folding hard-top roof no less. All used the same powerplant. The range was expanded in mid 2010 by the launch of the M3 Coupe Edition which offered a 10mm lower ride height plus a series of styling accessories and equipment upgrades. It was the M3 GTS that really set pulses racing though. This was a specialist track-focused model with power upped to 450bhp, the dual-clutch paddle-shift gearbox as standard, extensive use of carbonfibre in the bodywork, no rear seats and numerous other weight saving measures. The price, at over £100,000, was almost more of an eye-opener than the performance.

What You Getword count: 271

The M3 is packed with intriguing design features but the most important one for many is that it looks the part. There was barely a dissenting word uttered after its unveiling and most observers judged that BMW had got it spot on, providing a canny balance between sophistication and testosterone-fuelled aggression. The blistered wheel arches house 18-inch rims as standard, although many owners upgraded to 19-inch rims. The front bumper is punctuated by a gaping honeycomb centre grille, flanked on either side by intakes that help cool the engine bay and front brakes. A power dome on the bonnet hints at what lies beneath. Move around the car and there are intricately formed side sills, while at the back, there's ventilation to draw hot air away from the differential. Four chrome-tipped exhaust pipes leave others in no doubt as to what's just blown by. Weight crept up slightly compared to its predecessor but a 77bhp increase in power more than made up for this. The fact that the power output is identical to the Audi RS4 of the same era is significant as BMW was keen to demonstrate that it makes better use of its available horsepower than the upstarts up the road in Ingolstadt. Whether you choose two or four-door versions, six airbags are standard, along with leather trim, 18-inch alloy wheels, auto lights and wipers, a full-colour DVD-based sat-nav system, electric seats and mirrors, plus rear parking sensors and automatic air-conditioning. Claims that this is a usable everyday car aren't off the mark with high levels of comfort in the cabin and decent rear legroom in the saloon version. 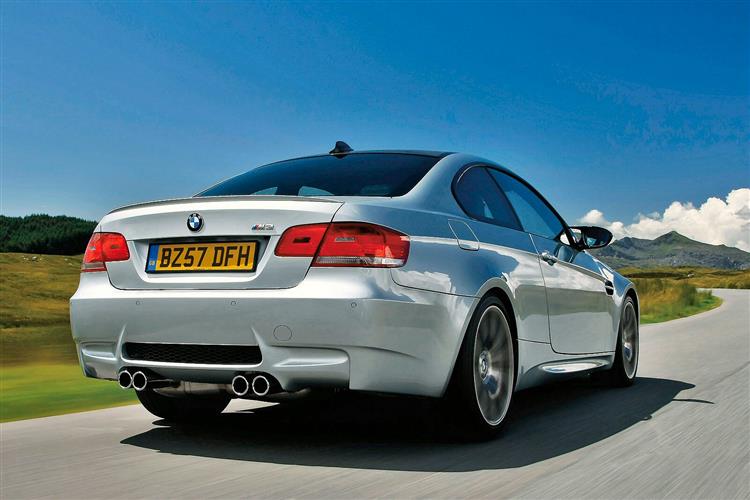