There are used cars and there are Lexus used cars. If you really want to take the stress out of a used car purchase, it's easily done by choosing the Lexus IS. In facelifted second generation guise, the IS morphed into a car that offered its own unique blend of talents, shifting subtly away from trying to copy its German rivals. It's one of those rare executive cars that is best bought with a petrol engine, there's a rare but interesting convertible option and a thunderous IS-F sports flagship with a 5.0-litre V8 and 417bhp. The IS never sold quite as well as it deserved but here's how to pick up a used bargain.

If you want a compact executive saloon - something like a BMW 3 Series, an Audi A4 or a Mercedes C-Class - but are fed up with these typical German alternatives and want instead to find something equally stylish and prestigious on the used car market that's just that little bit different, later versions of the second generation Lexus IS offer a very interesting option. Here's a car that's beautifully styled, robustly built and flawlessly reliable with a dealer network that's routinely steeped in praise by every customer satisfaction survey going. But if all of that is true, then why didn't this facelifted second generation version, launched in 2010, make more of an impact? Is this Lexus merely a second tier operator destined to gaze longingly up at the top table along with assorted Alfas, Volvos and Volkswagens. Or is the reality that this IS remains this market segment's best kept secret, a car that would be capable of breaking the BMW 3-Series, Mercedes C-Class and Audi A4 monopoly if only more people knew about it? The truth is a bit more complex. The Japanese brand has certainly tried very hard to put its product on the map, though you can't help wondering whether the effort has always been channelled in the right directions. In the case of this improved second generation IS, there are, after all, two smart but minority interest halo models - a V8 IS F super saloon and a pretty IS250C convertible - but nothing in the way of the kind of estate and coupe body styles that competitors offer. Nor is there much choice under the bonnet, with only single petrol and diesel choices at mainstream level. With this car though, Lexus was determined to make the most of what it had, hence in the case of the second generation IS a far reaching package of changes introduced at the end of 2010 that brought us the smarter, cleaner and more cost-effective car we're looking at here. It properly developed a second generation model recipe that went all the way back to 2005. And it introduced a huge raft of changes, from styling to the diesel engine that powered the newly created IS200d diesel variant. A value-packed IS Advance trim level was introduced at the start of 2011 which proved relatively popular and at much the same time, the top IS-F super saloon got a limited slip differential and its emissions were dragged into line with Euro5 standards. An all-new Lexus IS model was announced in 2012 for a dealer roll out in spring 2013.

This remains a very good looking car but try imagining it wearing an Audi or BMW badge. It's quite impossible. Post-2010 IS models received slight changes to the rear lamps and to the high intensity discharge headlights, which were tweaked to feature trendy daytime running lamps and flank a smarter front grille. Plus the body kit offered on F Sport variants looked even more dynamic. Otherwise the eye-catching 'L-finesse' design theme that this second generation IS model started out with in 2005 remained intact in these later cars. It's a very taut, muscular looking design with origami-sharp swage lines and very painstakingly finished detailing. The overall effect is sporty and unapologetically Japanese. It's also beautifully built: the gap between bumpers and adjacent body panels is just 0.35mm for example. Inside, the interior is also constructed with a typically Japanese attention to detail. That means a mix of quality materials; leather, wood, plastic, brushed aluminium and chrome with customary Lexus quality but without the integrated look and feel of German rivals. Technophobes will welcome the absence of complex computer control interfaces - just an easy-to-use colour touch screen - and general ergonomics are sound. Though it's easy to get comfortable in the front, rear seat space is at much more of a premium - but then this isn't a class of car noted for looking after rear seat passengers. You certainly won't be wanting to carry more than a couple of adults back there. The 378-litre boot isn't huge either but it's pretty much the kind of size you'd expect for this class of car. 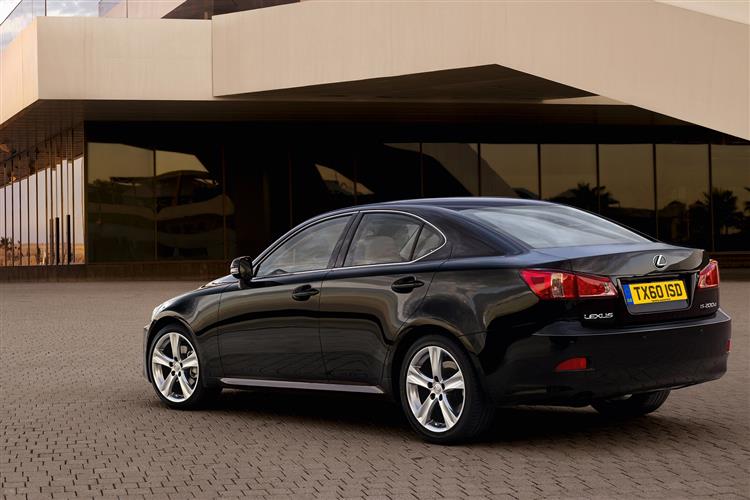