The Kia Carens might not be the obvious choice in the used mini-MPV sector but it offers a number of compelling arguments to those who research the market diligently. If you have a growing family and are working hard to balance the financial pressures this can bring, the Carens can go from an anonymous irrelevance to suddenly becoming a very good thing. Here's how to grab a good used buy.

The first Carens arrived way back in July 2000, so this is a model that had a decade's worth of development by the time the car we look at here arrived. A second generation Carens arrived in 2006 and the 2010 car was, in effect, a facelift and mechanical development of that car. Call it a Mark 2.5 if you like. The basic proposition was largely unchanged. It's a compact MPV offered with either five or seven seats. You know, the kind of car that most of the mainstream brands will charge you the best part of £25,000 for with the diesel power most will want - more if you want the kind of third row seating that'll be vital for larger broods. Like many families, Kia thinks that's a ridiculous amount of money for a car of this kind, so for around £4,000 less than something Scenic or C-MAX-like, they'd roll a Carens onto your driveway. Even at that kind of saving, you wouldn't have thanked them for the original first generation version, but these later cars were a much improved proposition, thanks in no small part to the more efficient 1.6-litre engines. The trim structure of 1,2, and 3 was incredibly easy to figure out and the Carens did steady, if unspectacular, business right up to its replacement, which was first shown at the Paris Motor Show in autumn 2012.

The key decision in this sector that has taxed the minds of many major manufacturers is whether to develop a five or a seven-seat design. Kia neatly sidestepped this quandary with this model by offering it in both five and seven seat guises. Of course, the ultimate test of how well these vehicles are packaged comes when you try to lever an adult into the back row of a seven seat version. With most mini-MPVs, their knees will be up around their ears. Next time you get in any other seven-seat mini-MPV, get a tape measure and check the height between the top of the seat cushion and the floor. It's often around four or five inches - which is frankly laughable. Kia got around that problem here by designing a shallow petrol tank that sits inside the rear suspension subframe. This drops the floor height by some 40mm, allowing for a more relaxed seating position. The Korean company reckons that adults of 5'11" will be comfortable in the rearmost row of seats in the seven seat model, although that may be pushing it. Longer, wider and taller than its predecessor, this MK2.5 Carens looks quite polished. If you didn't know what it was, you might be astonished to hear that when new, this was one of the cheapest mini-MPVs you could lay your hands on. Whichever model you choose - 1.6-litre petrol or 1.6-litre diesel - you should find your car to be very decently equipped, despite the bargain basement pricing. Features fitted across the line-up include alloy wheels, tinted glass, air conditioning, all-round electric windows and power mirrors, a 6-speaker MP3-compatible CD stereo with AUX and USB sockets, remote central locking and various 12V power sockets. Further up the range, you'll find features like roof rails, Bluetooth connectivity for your mobile 'phone, privacy glass, reverse parking sensors and leather trim. Safety kit includes twin front, side and curtain airbags, plus ESC stability control and the usual electronic assistance for braking and traction. 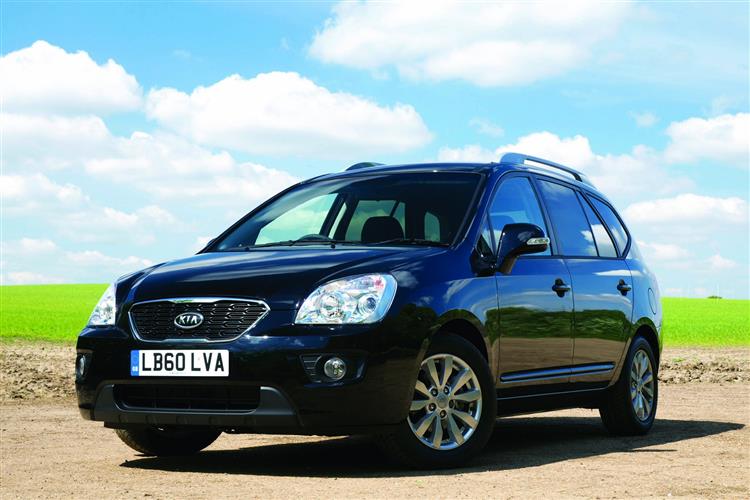