I was recently looking back at a review I wrote on the first generation Kia Sorento, a car that did big, cheap and rugged very well. "The Sorento was always a very smart buy but it's more than that now. Making it something you'll feel genuinely proud of owning is Kia's next assignment." I'm not claiming some sort of insider knowledge or spooky prescience, but that's exactly what Kia did with the second generation Sorento, to an extent that few of us foretold. Although some might bemoan the loss of a rough and ready bruiser that you wouldn't really think twice about beating across a ploughed field in, the MK2 model has a broader appeal and fits well with Kia's burgeoning reputation as a car manufacturer on the up. Here's how to shop for the early second-generation models.

The original Kia Sorento first arrived in 2003 and was heavily revised in the autumn of 2006. Its replacement was always going to be a more polished product, but in fact it took a subtle but interesting change of tack. Instead of being marketed as a go-anywhere item like the first Sorento, the car that made its European debut on the show stand at the 2009 Frankfurt Show was cut from very different cloth. Billed somewhat curiously as a 'Highline Cruiser', most took that as Kia-speak for a crossover vehicle. The thing is, although smaller crossovers like the Nissan Qashqai have sold well in the UK, bigger ones have tended to come a little bit unstuck. Nissan's Murano and Mazda's CX-7 are two conspicuous cases in point. The Sorento rolled into UK dealerships in early 2010 and sales have been generally encouraging without fear of any stampedes. An entry-level five-seat variant was offered at the foot of the range, but most models were based around seven-seats. The Sorento soon started picking up industry awards and won a EuroNCP five-star crash rating to boot. In December 2010, a range-topping Sorento 'KX-3 Sat-Nav' was introduced, adding an integrated satellite navigation system, an uprated Hi-Fi and a colour reversing camera system. The Sorento was replaced by what looked like a facelifted car in the autumn of 2012, but which actually got a whole new chassis, as well as the usual efficiency and styling tweaks.

This car is a genuine seven-seater with plenty of space for occupants seated in the third row where specified, making it, say Kia, 'best-in-class' for accommodating the sixth and seventh occupants. Access to the cabin is also improved as the 'hip-point' for the front and second row seats is lowered by 37 mm, the cabin floor is lowered by 32 mm and the second row near-side seats 'double-fold' to allow easier entry and exit for third row passengers. For maximum versatility when accommodating people and cargo, the Sorento's second row seat is split 60/40 and the optional third row seat is split 50/50. These seats' backrests fold almost flat to extend available boot space. Luggage space is impressive, with cargo capacity increased by 15% over the original model, thanks to moving the tailgate back by 70mm. When using the vehicle as a five-seater, with the third row seats folded down (where fitted), total capacity is now 531 litres - 96 litres more than the previous model. Cargo capacity with all seats upright in the 7-seater is 111-litres, and a massive 1525-litres when both the third and second row seats are folded down. Kia is known for its generosity when it comes to specifications and the Sorento is unlikely to disappoint. Standard equipment on all models runs to alloy wheels, electric-adjustable door mirrors, air-conditioning, Keyless Entry with central locking, an RDS Radio & CD player with MP3, ESC (Electronic Stability Control) with DBC (Downhill Brake Control), HAC (Hill-start Assist Control), driver and front passenger airbags, front row, side airbags, full-length curtain airbags and 'active' head restraints. Original customers got a choice of five or six speed manual gearboxes plus five or six-speed automatics depending on the engine choice. As an option, a two-part glass Panorama Roof was available. The rear section is fixed, while the front section is powered and can be tilted for ventilation or slide fully back to enjoy uninterrupted views. Inside, a multi-position roller blind allows the level of shade within the cabin to be finely adjusted. 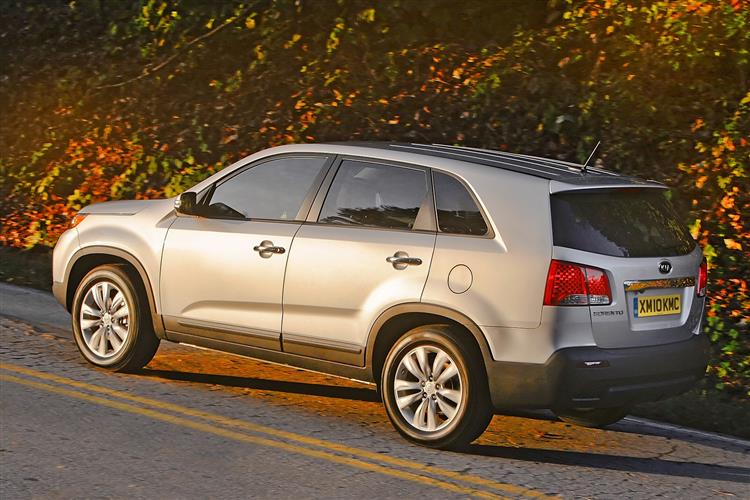