Kia is widely regarded as one of the most progressive and adventurous of the major car manufacturers, but cast your mind back a few years to 2008 and its pro_cee'd three door hatch had quite a task on its hands. It needed to convince a British public largely accustomed to Korean cars being bargain basement specials that they could be, well, sexy. Of course, there are early adopters who twig fairly quickly that the car-buying climate is on the change and then there are those who like a bit more time before the penny drops. I'm not judging you if you're one of the latter, but if you now think the pro_cee'd was something that you should have bought, why not take a look at a used example? It makes a brilliant used buy and the value proposition is hard to argue with.

The Kia pro_cee'd is a car that can be excused its quite gratuitously horrible punctuation. Why? It's a good honest car. What was a good honest car when first revealed at the 2007 Frankfurt Show became a very respectable production car when it rolled into UK dealerships in February 2008. Rather refreshingly, it was priced identically to its five-door cee'd sibling, removing at a stroke the usual complaint levelled at the new crop of three-door models that you paid more and got less. In April 2008, the 2.0-litre CRDi diesel engine was offered in a range-topping Sport grade with 17-inch alloys, black bezel headlights and rear privacy glass. The Sport's interior featured part-leather seats featuring a specially designed tyre tread cloth design with silver stitching highlights on seats, arm rest and steering wheel. A VR-7 special edition model was introduced in December 2010 on 1.4 petrol manual models. This got 16-inch alloys, and body colour, heated and electronically controlled door mirrors. Inside there was air conditioning, remote central locking and front electric windows. Bluetooth functionality and iPod connectivity got the most out of the 6 speaker surround sound system. Electronic Stability Control with Hill Start Assist Control and Vehicle Stability Management were also standard fit items. Many of the features found in the Sport were introduced into the '4' trim level which debuted towards the end of this model's life in April 2011 and in conjunction with the 126bhp 1.6 diesel engine. The pro_cee'd was replaced by an all new model in early 2013.

The styling work of the pro_ceed is extremely adept. All too often, we were accustomed to getting Korean cars that had been designed with their domestic market in mind and they tended to lose something in the translation. The pro_cee'd is different, as it's been designed by Europeans for Europeans. Styled by a Frankfurt-based design team and screwed together in Slovenia, the pro_cee'd is lower and longer than the five-door car, giving it a purposefully hunkered down stance. The front overhang is longer by 12mm and the overall height is 30mm lower and Kia has used a stylist's trick to visually extend the roof line by fitting a spoiler at the top of the tailgate. The car's waistline is decently angled and a swage line along the flanks gives tension to the profile. The only body panels shared with the cee'd five-door are the front wings and the bonnet. As you'd expect from a Korean car, equipment levels are very strong, with even the entry-level pro_cee'd getting air-conditioning with cooled glovebox, heated and electrically-adjustable door mirrors, remote central locking, 16-inch alloys and an MP3-compatible CD stereo with both USB and auxiliary ports for data sticks and MP3 players. Go for the pro_cee'd 3 and it adds 17-inch alloy wheels, climate controlled air conditioning, a sports pack and cloth/leather sports seats. The Sport weighs in with full leather trim, tinted glass, stability control and electric folding mirrors. Even the top-specified 2.0-litre 138bhp diesel pro_cee'd cost less new than a 110bhp 1.6-litre diesel Peugeot 308. It was very hard to argue with that sort of value and it's even harder now with tempting used prices. 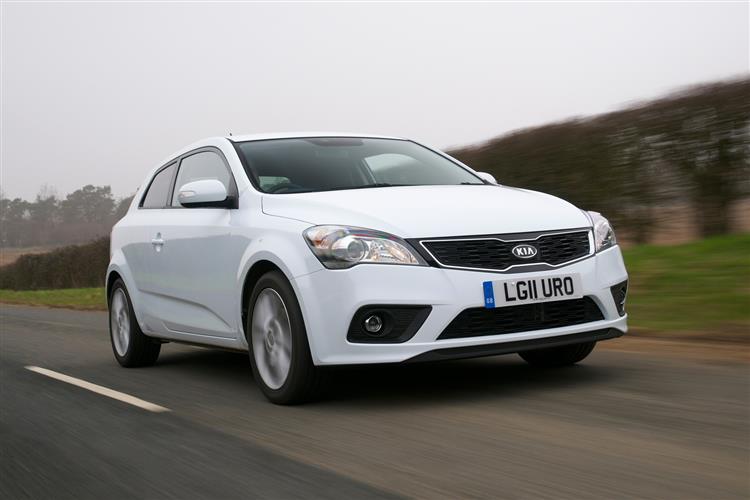