You know you shouldn't do it, but sometimes there's nothing more satisfying than being able to say 'told you so'. Lexus finds itself in exactly that position with its range of high-end hybrid vehicles. Initially derided by rival manufacturers as Heath Robinson workarounds brought about by the fact that Lexus didn't have a big diesel engine at its disposal, companies like Mercedes, BMW, Porsche and Audi are now all adopting petrol/electric hybrid technology on their cars - and not just at the affordable end of the range. There's one car that's been using this technology for quite some time and fully deserves the crown as king of the hybrids, and it's the Lexus LS600h. Here's what to look for when shopping for a used example.

Back in 1989, the Lexus LS redefined what a large luxury saloon should be. It was as simple as that. It seems rather ridiculous now to remember that back then, the European makers who ruled the market defined luxury as being as much about wood and leather as it was about ride and refinement. Thanks to this Japanese brand, cars of this kind were finally transformed from boardroom barges to the technological showcases buyers had a right to expect from their inflated pricetags. By the time that the third generation LS was launched in 2006 though, the opposition had finally caught up. With another seismic step forward needed, this LS600h hybrid provided it, offering such an impressive blend of power, efficiency and refined luxury that for most of the MK3 LS model's lifetime, it was the only version on offer. Throughout production of this third generation version, detail improvements added to a sense of style and identity fully befitting the most technologically-advanced car in the world. This then, was the model that finally allowed the Japanese company to stamp its own identity on the luxury car market. The LS600h enjoyed a facelift in 2010 and it's these later cars that we look at here. Can buying used and taking the sting off the initial depreciation make this an unbeatable luxury proposition?

What You Getword count: 373

Go for the long wheelbase version and there's a premium (that was about £9,000 when buying new) for the Rear Seat Relaxation Package for which you'll really need a chauffeur as well. And rivals? It's hard to think of any direct ones. Boardroom buyers who don't want a diesel and like the idea of combining petrol power and refinement with a eco-statement will look to this car first. Whether you choose short or long wheelbase LS600h models, the equipment list is vast. Things like satellite navigation with voice control and rear camera parking assist are of course standard but bear in mind that some functions are restricted to the options list. Get the vendor to talk you through it all before you decide - and put plenty of time aside: you'll need it. If you go for the mildly facelifted MK3 model introduced in 2010, then your car will feature a higher spec with hi-tech enhancements that include clever automatic high beam headlights that dip on their own at night. And an advanced 40GB HDD satellite navigation system that helps the 19-speaker Mark Levinson Premium Surround Sound stereo to transfer and store up to 10GB of music files that can create your own sound library with up to 2,000 music tracks. Post-facelift safety additions included inflator-operated active headrests which in an impact, thrust forwards and upwards, reducing the risk of whiplash injury. The long wheelbase body style is the one chosen by most LS buyers and all 120mm of its extra length has gone into increased legroom for rear seat passengers who'll especially enjoy themselves if the owner has gone for the expensive but desirable Rear Seat Relaxation Package option. This premium seat arrangement could be specified in five as well as four-seat models, offering extra reclining, massaging and climate control functions in a rear cockpit that feels rather like mission control with all its lights and buttons. As for bootspace, well even with well over five metres of length, the hybrid system's bulky battery pack means that you don't get very much - 370-litres in the standard car and just 330-litres in the long wheelbase model - less than a little BMW 3 Series. Buy a leather-lined MPV if you want space. 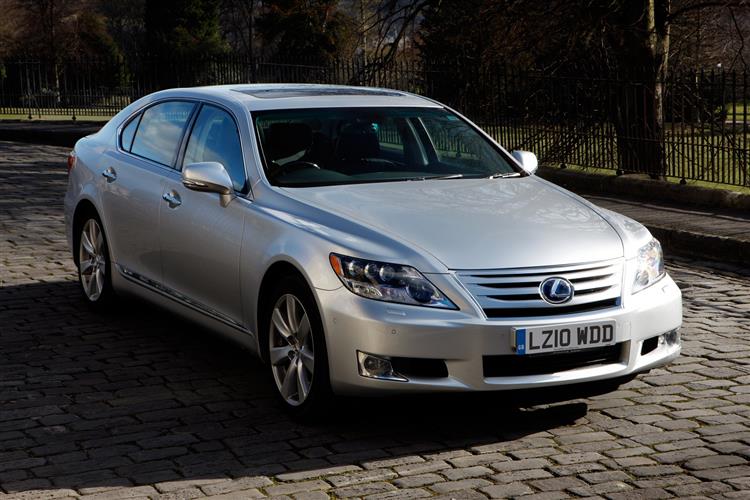