MORE POWER TO YOU (some text hidden)

At first, it was easy to scoff at hybrid Lexus sports utility vehicles. They only plumbed that technology in there because they didn't have a decent diesel engine to put into them, we chuckled. While there was an element of truth in that, none of us cynics realised quite how committed Lexus was to the cause. The early RX 400h set the template but the RX 450h was a massively improved proposition. Would it be a better car if it had a diesel engine under the bonnet? I'm not certain it would Here's what to look for when shopping for a used version of this very successful SUV.

While other manufacturers and industry pundits debated the pros and cons of hybrid vehicles, Lexus got on with building and selling them. It has now reached the stage where hybrid technology is inextricably associated with the Lexus brand and the company is well down the road of developing and refining its petrol/electric drive system while rivals nervously pace the water's edge wondering whether to take the plunge. We've now seen BMW, Audi, Mercedes and Porsche take tentative steps, so perhaps Lexus has every right to feel a little smug. It is, after all, two and a half generations of car along that particular road. The RX 400h, which first arrived back in 2005, was the precursor and sold well to buyers who didn't want a diesel but valued decent economy and, at the time, free entry into London's congestion charge zone. By 2009, that loophole had closed but the RX 400h's successor, the RX 450h we look at here, had a number of other attractions. It was a good deal more powerful, more economical and better equipped. The range was bolstered in 2011 with the addition of a mildly rugged-ised SE-I Lifestyle edition that targeted winter sports and country types. In summer 2012, the RX 450h received an extensive update, with the revised Lexus spindle grille grafted onto the front end, uprated trim levels and the addition of a ritzy F Sport flagship.

There are obvious echoes of the old RX 400h in the styling of the RX 450h. The look was kept fairly conservative and evolutionary in the best Lexus traditions but there are engaging details such as the heavy shoulder line and the way the headlights integrate with a front grille that features a blue-tinted Lexus badge at its centre. A turning radius of 5.7m hints at decent manoeuvrability and inside, there's a 495-litre boot adding to the practicality of the car. The seats split 40:20:40 and can slide backwards and forwards to increase the luggage space behind. There are also levers in the boot which fold the rear seats down at a single touch for greater convenience when loading. There's a huge array of technological features on the RX450h - even without taking the car's powertrain into account. The car was the first Lexus to get the Remote Touch control system which operates the audio, navigation, climate, phone and vehicle set-up systems through an eight inch colour display screen and a control knob located on the centre console. There's also an optional heads-up display that projects crucial driving information onto the lower part of the windscreen (so there's no need for drivers to look away from the road) and a park assist system which uses cameras to give an unrestricted view of what's behind the car on the display screen. The 2012 revision was led by the spindle-shaped grille that is rapidly becoming a signature Lexus design cue. Moving round to the rear, you'll spot a set of neatly redesigned tail lights too. There are also a number of detail improvements throughout the cabin. There's a revised steering wheel, incorporating a new selector switch for the hybrid system's drive modes, and the operation of the Remote Touch controller was also revised so that it worked more like a computer mouse. The Lexus attention to detail even extends to increasing the opening angle of the centre console box lid to make it easier to reach items inside. It's still not the biggest SUV in the cabin, but the 496-litres of boot space with the seats in place is respectable. 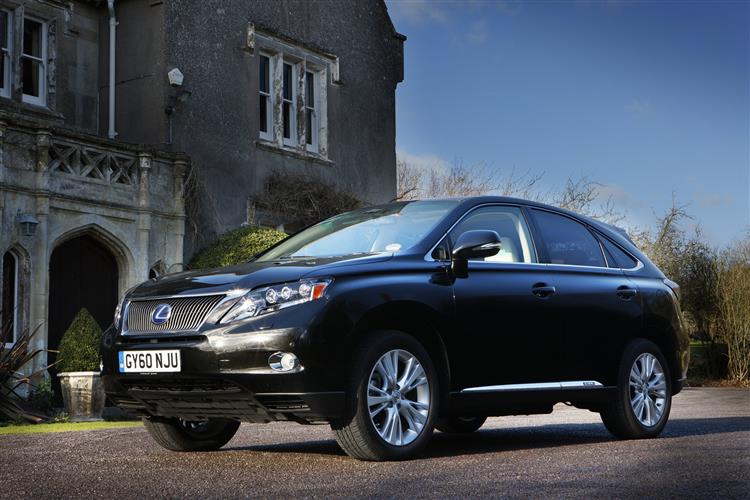