SHO ME THE MONEY (some text hidden)

In its own quiet way, Mitsubishi often seems to spot innovation early. Porsche licensed copies of Mitsubishi's contra rotating balancer shaft to make their engines as smooth as butter and the Gasoline Direct Injection technology fitted to the Carisma was rapidly imitated by many manufacturers. The third generation Mitsubishi Shogun, which arrived in May 2000, was also a car that helped set trends. Engines and suspension were bolted directly to the monocoque body rather than installed in a separate chassis, contrary to the way that many family-style 4x4s had developed. In fact, it had more in common with the car-like luxury 4x4 models such as BMW's X5. This 'hybrid' between old school rugged appeal and modern underpinnings proved very popular, and this fourth generation car builds on those solid foundations with a massive host of detail changes. Here's how to look for a used bargain amongst the later fourth generation models. If there's one thing the Shogun has a lot of it's history and a brief precis is probably in order. The first generation car appeared at the 1981 Tokyo Show, followed by the second generation (1992-1999) and third generation models (1999-2007). The bigger but more energy efficient fourth generation version debuted in 2007 but we're particularly interested here in the post-2009 cars. These models built on the fourth generation Shogun's improved safety, Euro IV emissions compliance and superior interior quality and added a 3.2-litre turbodiesel engine that boosted power from a modest 168bhp to a far more muscular 197bhp. A new five-speed automatic gearbox was also introduced. This model persisted until 2011 when Mitsubishi introduced a subtle facelift with a revised chrome grille with slotted bars and thick dividers on either sides. There were also colour-keyed bumpers, a black front skid plate, redesigned alloy wheels and black roof rails.

Although the shape is instantly recognisable as that of a Shogun, there are a number of key differences between this fourth generation car and its direct predecessor. Keen spotters will clock the contoured front lights blended with the blistered leading edge of the front wheelarch. There's also a revised front grille with bolder chromed slats. The short overhangs and the upright windscreen serve to remind buyers that this is no bling smoothie, instead wearing its macho credentials on its sleeve. Three door short or five-door long wheelbase models are offered. They're properly big too. In long wheel base guise, the car is 4.9m long, 1.9m wide and 1.9m high so you'll need a garage with a fair amount of headroom. Mitsubishi's innovative 'Hide&Seat' system quickly converts the long wheelbase car from a five to a seven-seater with two seats that fold from a flat boot floor to create a third row complete with integrated head rests. These rearmost seats are impressively roomy and when they're folded away, there's a 1,790 litre luggage compartment for your convenience. You won't be blown away by classy materials and swish design inside the Shogun but it never feels less than extremely durable and very user-friendly. 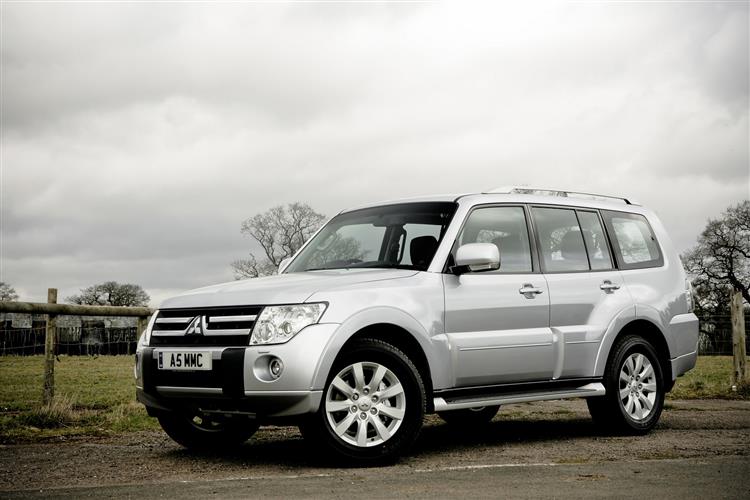