Sometimes car buyers don't want to do the research. They want something that's going to be easy to buy, easy to maintain and easy to drive. They don't care about handling, soft-touch plastics or 0-60 times. They just want a hassle-free experience and that's exactly what's served up by the Kia Rio. Good looking and inoffensive, the Rio is a very good cheap car. As a used buy it has plenty to commend it.

The Kia Rio first established itself as a very spacious but rather outdated budget hatchback that originally went on sale back in 2001. Kia was still struggling to establish itself in Western markets at that stage and had little clue as to the detailed requirements of European and US drivers. The Rio sold in modest numbers while elsewhere in the company's model line-up, with each successive car, Kia zeroed in closer to design respectability. Vehicles like the Picanto, the Sedona and the Sportage established the Korean company as a credible manufacturer of value products but the MK2 Rio, while massively better than its predecessor, never really caught on in the same way. Introduced in September 2005, this Rio featured a crucial ingredient lacking from its predecessor - the option of a diesel engine. One five, door body style, two trim levels and a choice of a 1.4-litre petrol or a 1.5-litre diesel was the extent of the Rio range.

What You Getword count: 386

One of the key problems of the old car was that from a styling perspective, it didn't seem to know quite what it wanted to be. It seemed to hover somewhere between a hatch and an estate, but the second generation car sharpens up the styling quite significantly. In fact, it's almost what you could call good looking, with a smart fresh family face. Everything about the car was redesigned. That styling, for example, went down well, featuring as it did a bolder nose, a more dynamic profile and a neater interior. Comfort-wise, there was more headroom, legroom and shoulder room, especially in the rear. From a safety perspective, there were twin front, side and curtain airbags, plus active head restraints and the option for owners to consider the availability of the electronic stability programme, ESP. As for performance, well, rather unusually, this was an all-new car that launched with all-new engines, with both diesel and petrol units claimed by Kia to be amongst the class best. Both featured much stronger refinement than Kia had been able to offer in the past, courtesy of sleeker aerodynamics, a stronger structure and greatly enhanced NVH (noise, vibration and harshness) measures. Finally, customer convenience was also high on the developers' list, with the Mk2 Rio offering a more versatile cargo space, a trip computer, solar glass and the availability of keyless entry. The Rio still revelled in its shameless affordability and decent equipment levels, the entry-level model including central locking and twin front airbags as part of its standard specification. There was also an optional Dynamic pack that included a rear spoiler, a sunroof and an Electronic Stability Program for additional safety. The 3,990 mm long second generation Rio hatchback is taller (+50 mm), wider (+15 mm) but shorter (-250 mm) than the model it replaced. The car also has a much longer wheelbase (+90 mm) which, combined with careful packaging of the mechanical components, enabled it at launch to claim 'best-in-class' interior space for maximum occupant comfort. The Rio's wheelbase is between 9mm and 40mm, longer (in 2005 at least) than rivals like Volkswagen's Polo, Skoda's Fabia, Peugeot's 206, Ford's Fiesta and Vauxhall's Corsa, while its overall width was from 12mm to 49mm wider. The overall length was between 30mm and 168mm longer than those potential supermini rivals. 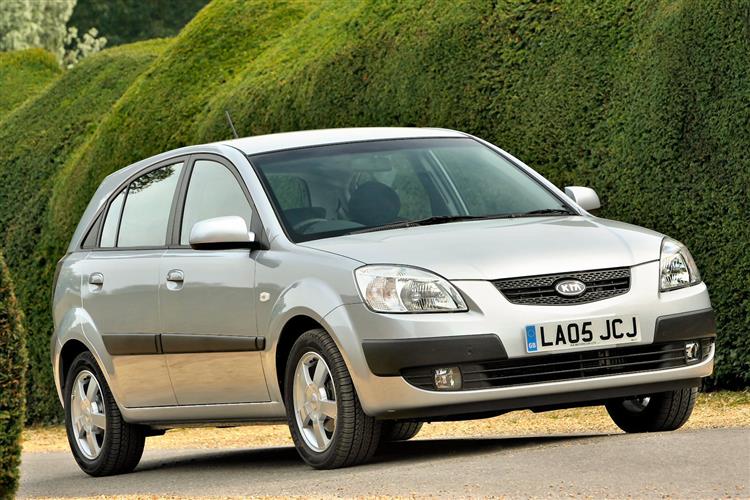