Can we be frank for a moment? The first generation of coupe-cabriolet cars weren't really all that great. Their proportions were weird, they drove as if the chassis rails had been constructed from Battenberg cake and their manufacturers never really got the quality nailed, such that the interiors would twitter away more reliably than Stephen Fry at a consumer electronics show. Latter iterations of these folding hard top cars have become a lot better to drive and a good deal more satisfying to own and none showcases that better than Peugeot's 308 CC. Here's what to look for when searching for a used example.

By most accepted measures, the Peugeot 308 CC has no right to be as good as it is. The 308 model line as a whole was merely a heavily facelifted version of the rather unlovely 307, so it was reasonable to expect more of the same. Instead it was clear that beneath the surface Peugeot had been getting the fundamentals squared away with some efficiency. When it appeared in UK dealers in June 2009, the 308 CC was offered with a choice of three petrol engines (1.6 VTi 120, 1.6 THP 140 Auto and 1.6 THP 150) alongside two diesels (HDi 110, and HDi 140). Four trim levels were offered with Sport being the entry level for the more modestly powered engines, rising through SE, GT and GT100, which was reserved for the THP 150 engine. Things stayed this way until May 2011 when the 308 range was given a thorough revision. The styling was tweaked, better quality interior materials were utilised, safety equipment improved, more efficient engines appeared and the trim structure changed to Access, Active, Allure and GT.

The 308 CC is more generously cut than its predecessor, being 43mm longer, 58mm wider but 15mm lower. The front and rear track (the distance across the car between the wheels) measurements are both significantly wider, giving the 308 CC a more aggressive and sleeker stance. Unlike some of its rivals which have gone for a more compact three-piece folding hard top, the 308 CC continues with a two-piece affair. This lowers in twenty seconds at the press of a button and will operate at speeds of up to 7mph, so you'll be able to drop the top in traffic without irritating those behind. The system is controlled by a revised electronic control unit which automatically lowers all four windows by around 50 mm before any roof operations commence. A perennial complaint about folding hard top cars is that there's very little in the way of boot space when the hood concertinas away and Peugeot has clearly put a lot of thought into how to fix this. A three-piece roof, while helping the shape of the car, only exacerbates the problems of luggage storage. In the coupe configuration, the boot volume is 465 litres and 266 litres with the roof folded. Inside, the boot features an under floor compartment that can house the optional wind deflector, chrome tie-down rings, straps for retaining a warning triangle and a luggage net to prevent your groceries going flying. Unlocking and releasing of the boot are also possible by remote control and can be operated by means of a dedicated button on the ignition key. 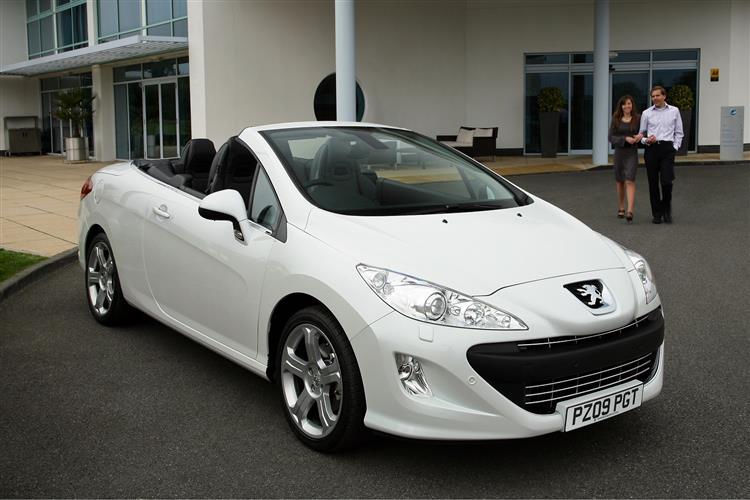