(NOT SO) FAMOUS FIVE (some text hidden)

There are tangible rewards out there for the used car buyer willing to approach things from an alternative angle. Following the herd provides the safety of numbers and should ensure that the most precipitous pitfalls are avoided but with just a little independent thinking, you could tap in to one of the bargains that the mainstream market routinely flows past. All of which brings us to the Mazda5. With a whole gaggle of higher profile rivals competing for sales in the compact MPV sector, Mazda's offering was regularly overlooked by new car buyers and comparative rarity as well as this lowly profile has meant that it's been largely the same story in the used arena. Don't let that put you off: the 5 has plenty to recommend it.

The explosion in the compact MPV sector around the turn of the century saw what was previously a modest niche in the market become a full-blown money-spinning sector in which no mainstream manufacturer could afford to be without representation. The Citroen Xsara Picasso, Renault Scenic and Vauxhall Zafira combined with the Ford C-MAX to form a mainstream into which most buyers were drawn. That left Volkswagen's Touran, Toyota's Corrolla Verso, Honda's FR-V, Fiat's Multipla and Mazda's 5 competing for the scraps from the top table with an underclass of tightly-priced offerings from the budget marques. The origins of the Mazda5's design can be traced through the Premacy via the MX-Flexa design study, shown at the 2004 Geneva Motor Show. Originally built to demonstrate one possible direction for future Mazda MPV vehicles, the MX-Flexa received such a warm reception that many of its design principles were incorporated virtually unchanged into the Mazda5 production car. The Mazda5 hit the streets comparatively late in the day, long after the compact MPV concept had blossomed and borne fruit. This tardy arrival came at a stage when the choicest chunks of the market had already been divvied up amongst the big boys, partly explaining the 5's failure to make a more significant impact. The range was fashioned around four engine options, two petrols and two diesels, with the diesels arriving a little later. Trim levels ran from TS through TS2 to the visually-enhanced Sport and the Sport Nav which tacks on a satellite navigation system with a 7" pop-up screen. The '5' was facelifted late in 2007 with a revised nose bringing a sportier look and improvements to economy and CO2 emissions. Electric operation for the sliding side doors became available as an option.

Running on the same underpinnings as the Ford Focus C-MAX - which, in turn, purloined its mechanicals from the acclaimed Focus family hatch - the Mazda5 has a strong pedigree. It's sleeker styling, 6+1 seating layout and the inclusion of sliding side doors - a unique feature on a compact MPV at the time - makes the 5 a more attractive and practical proposition than the 5-seater Focus C-MAX. Predictably, it's also more expensive. The interior was designed according to Mazda's "6+1" concept which attempted to deliver comfortable seating for six occupants, plus an additional element of utility that stresses plenty of luggage space, walk through convenience and ample stowage space. The key theme is the open space created in the centre of the cabin that means that every occupant has ample shoulder space and assists interaction between passengers by ensuring there are always sightlines between one row of seats and another. Although there's ample room on the inside with three rows of two seats, the Mazda5 isn't superstretch limo long. In fact, at 4,505mm in length it measures just 85mm longer than the Mazda3 family hatch, whilst the width is identical, so there shouldn't be too many horrors when manoeuvring this wagon into a crowded multi-storey car park. Despite its wheel at each corner stance, the turning circle of just 530cm means that even if you do need to throw a shifty three-point turn, you won't need acres of road to do so. Mazda claimed a class first for the large sliding doors on both sides. Previously restricted to seriously-sized MPV vehicles, these make good sense because they don't swing out in the manner of conventional side-hinged doors. How many times have you been forced to sheepishly apologise when the kids whack their doors into the flanks of a parked car in a supermarket car park? The Mazda5 solves that particular problem. These doors slide backward to create an opening of fully 700mm, an aperture that should be plenty wide enough for a parent carrying an infant. The plastic tailgate is another clever touch. Mazda discovered that the tailgate mechanisms of many MPVs and 4x4 vehicles were becoming so heavy and cumbersome that they were difficult for lighter weight operators to close. With a two-step mechanism built in, the tailgate of the Mazda5 is light and smooth in its action. The second and third rows of seats can be arranged in a number of configurations. In addition to their sliding adjustment and reclining functions, the second row also features a double-fold mechanism. Folding down the second and third row seatbacks creates a virtually flat floor for the luggage compartment. Other rivals are a little slicker in this regard, but the Mazda5 scores in terms of ease of operation. The space between the second row of seats is given over to either a utility box or a 'karakuri' occasional seat that's narrow and only really suitable for small children. All models feature electric windows, manual air-conditioning, power steering, tilt and height adjustment of the steering wheel and a CD stereo. 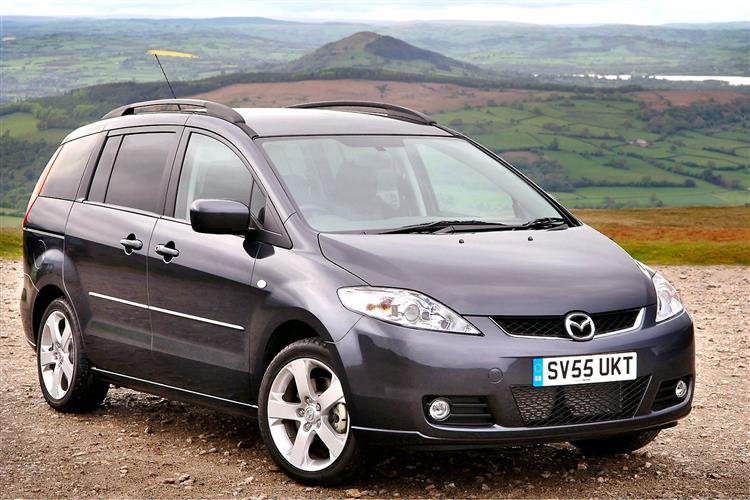