ALL ABOUT THE SCOUT (some text hidden)

If you're having trouble deciding between an estate car and a 4x4 for your next family vehicle, Skoda's Octavia Scout could be manna from heaven or a family-sized fly in the ointment. It depends on you point of view. Mixing and matching the sensible qualities of the good old-fashioned estate car with elements of compact 4x4 design, this Octavia at once brings yet another layer of choice to baffled buyers and represents a handy compromise for the undecided. That's the concept anyway. How does it shape up in reality?

The Octavia on which the Scout is based was launched in 2004, with the Estate version unveiled at the Paris Motorshow in September of that year. From the word go, there were 4x4 versions of the Octavia Estate but these are not Octavia Scouts. Oh no. The Scout didn't put in an appearance until 2007, hitting Skoda showrooms in March. The Octavia 4x4 models continued to be sold alongside it but the Scout was clearly a different proposition with increased ground clearance, big plastic bumpers with aluminium skid trays peeping out underneath and body mouldings for yet more protection. The Scout also had a Hill Hold function built into its ESP stability control and was only available with two of the Octavia's more powerful engines. There was a 2.0-litre FSI petrol unit and a 2.0-litre TDI direct injection diesel. The Scout was basically just an Octavia trim level. Offered only on the estate models, it sat above the 4x4 models which have the same Haldex 4x4 system but look just like a conventional estate. The Scout brought a little bit of the rugged image that was proving so popular in the expanding compact 4x4 market to a Skoda range that lacked a bona fide compact 4x4 at that stage. Scout versions of the smaller Fabia and the Roomster models were to follow, employing very similar themes to the Octavia based car. In early 2009, the Octavia was facelifted gaining bigger door mirrors and headlights as well as some new engines and a noticeably higher quality interior. Initially, the Scout versions only received the interior and engine modifications. It wasn't until a few months later that the exterior styling revisions filtered through. These post-facelift Scouts come with either a 1.8-litre TSI turbocharged petrol engine or the 2.0-litre TDI direct injection diesel. By the end of 2009, the compact 4x4 shaped gap in the Skoda range had been plugged by the Yeti and the Octavia Scout lost some of its importance in the brand's product mix.

Although the Scout's ground clearance is a full 40mm higher than that of the standard estate and 17mm higher than the 4x4 version of that car, it's worth putting this figure into some sort of frame of reference. With 170mm of draught beneath the car, the Skoda is still some way off other off-roaders of similar age like a Toyota RAV4 (191mm), a Volvo XC70 (200mm) or a Subaru Forester (205mm). Therefore it's probably best not to attempt to tackle deeply rutted tracks in the Scout. Instead, if you aim it at something a little more even in relief, it should do just fine. Much of a car's off-road capability is, in fact, down to the tyres and merely changing the rubber for more aggressive mud terrains will be the biggest advantage you could give the Scout when travelling off piste. Unlike some of its rivals (but just like the ordinary Octavia 4x4), the Skoda Octavia Scout features a permanently available all-wheel drive system. This doesn't mean that the car runs in all-wheel drive mode all of the time, merely that its functioning is completely transparent. You don't need to press any buttons or manhandle any levers inside the car to switch to four driven wheels. In normal operating conditions, 100 per cent of the drive is directed to the front pair of wheels but as soon as the Haldex coupling system detects any slippage, a proportion of drive is shared with the rear wheels to offer improved grip. Full integration with the traction and braking systems mean there's no tiresome loading of the steering that many 4x4 vehicles suffer from during parking manoeuvres. The generation of the Octavia Estate that the Scout is based upon is a good deal bigger on the inside than the previous one. There's a massive 1,620 litres of space available and even with the seats fixed into place, there's 580 litres available to stuff with bags. The interior also benefits from a Jumbo box under the front armrest and upholstery exclusive to this model. There's even a passenger hand grip on the dashboard to help brace yourself when tackling steep descents. The load bay is not only large but also sensibly shaped. Instead of the wheelarch intrusion that so many estate models suffer, the Octavia Estate features a large, flat load space, carpeted and trimmed with rails so that heavy items can be slid into place. Lashing eyes mounted on the floor ensure that heavy objects can be firmly stowed and all the fixtures and fittings look beefy enough to last the course. The sheer attention to detail is impressive. The low loading lip is thoughtfully contoured so that heavy items can be rested there for a moment without danger of slipping. Beefy gas struts keep the tailgate well out of your way so you've got plenty of room to manoeuvre. 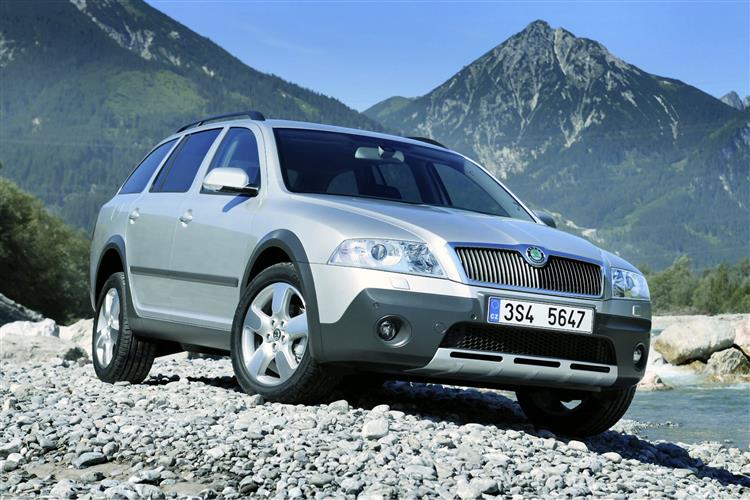